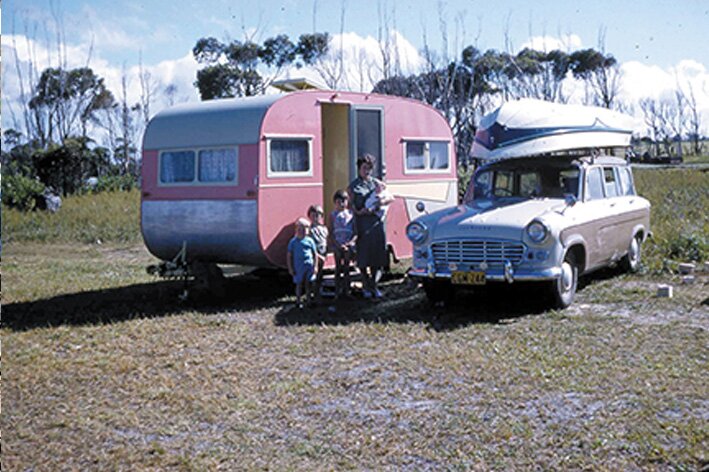 A life-long love affair with caravanning

When Pat and Lloyd Ridgway set off on their honeymoon in a classic 1950s Caravan, it was the start of a 60 year love affair with caravanning around Australia.

The Ridgway’s maiden voyage was no short trip. They headed down the south coast from Sydney, along Victoria’s Great Ocean Road and back to Sydney via the Snowy Mountains.

Their accommodation was a hired van assembled from a kit and towed by Lloyd’s Austin A40 ute. The honeymoon was not without its dramas. The roads were rough and there were few caravan parks. The isolation experienced while stranded by flood waters for several days with a very limited supply of food and fresh water, remains a vivid memory.

While the roads were rocky, clearly the relationship was solid and once they returned Lloyd was soon at work assembling a kit van of their own to keep.

The 12 footer doubled as Lloyd’s office and a spare bedroom as the first of four children arrived.   As the family grew, they needed more room so, Lloyd, an experienced architectural draughtsman, designed and built a bigger one.

He said the caravan’s sides were Rescote ply, the back and front were aluminium and the roof was one large sheet of fibreglass produced by a local manufacturer.   While the fibreglass was still “green”, it was wrapped around the roof framing, secured and left to cure.

An interesting addition to this van which is rarely seen these days, was the “dolly wheel”.

The weight of the van was partially transferred to a third wheel at the front, spreading the load more evenly.

There were two types available at this time, the Jones wheel, equipped with a shock absorber, was used by the Ridgways.

Lloyd recalls it being very durable on the rough roads of the time and is not sure why they went out of fashion.  Another dolly wheel on the market at this time was the dual-wheeled Hutchison brand.

It wasn’t till the early 1970s Lloyd finally purchased a van that was assembled by somebody else. The 18 foot, six berth Viscount was followed by a 14 foot Millard.

In 1977 they purchased a Franklin motorhome, built on a Ford Transit van with gas hot water system, shower and toilet.

Their caravan attraction however proved too great and they replaced the motor home with a Futura van in 1982.  Lloyd kept it in immaculate condition, also adding a few modifications of his own.

Pat and Lloyd were finally forced to part with the caravan in 2012, but they still have boxes of happy memories to share from their time roaming Australia.  Their family albums are a spectacular snapshot of holidaying in the 1950s to the 1970s.

The Ridgway family travelled throughout Queensland, NSW, Victoria and South Australia. From the Gulf of Carpentaria to the Flinders Rangers and WA border.

They’d recommend a caravan holiday for any young family.  “It’s the best family holiday, our children learned so much about Australia.”

By GARRY AND JANICE BRUEM