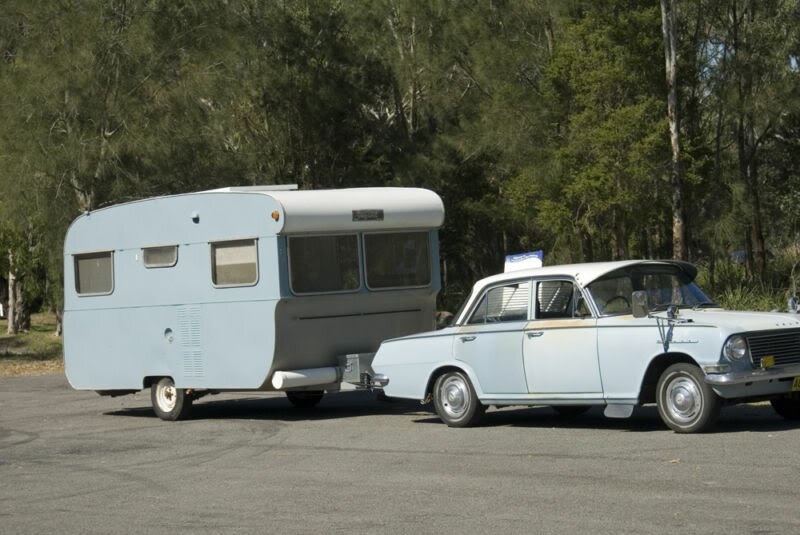 Caravan dealer GEORGE LADAS traces the history of this iconic brand ­and how he found the van of his dreams tucked away in a farm shed.

In the caravan world, the names Viscount and Millard are as synonymous as Ford and Holden is to our car industry.

They’re the names people know and trust and for many years looked out for when buying their first caravan.

When one of our greatest cricketers, Glen McGrath gets nicknamed Millard because he lived in one for a while, it simply must be iconic. 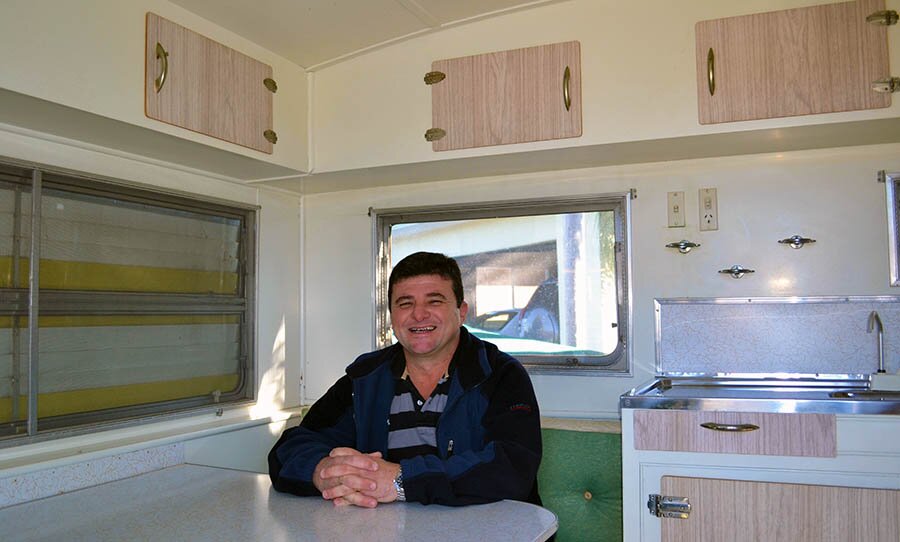 The Millard history has its origins way back in 1947, when an enterprising Jim Darlington looked at the American “trailer” lifestyle and thought it may have a future here.

Jim started building caravans in a small factory in Mortlake, a southern suburb of Sydney.

Jim had two sons, John and younger brother Peter. John would help his father build the caravans in those early years, Peter followed when he was older.

Around 1954, the business moved to a bigger premises at North Ryde where construction of the caravans become a little more professional than the relatively small and basic operation at Mortlake.

John became the new owner, with father Jim on hand for guidance. Peter started as a carpenter and progressed up to the executive team.

John’s wife Mary also came into the business where she became involved in the interior decorating of the vans. 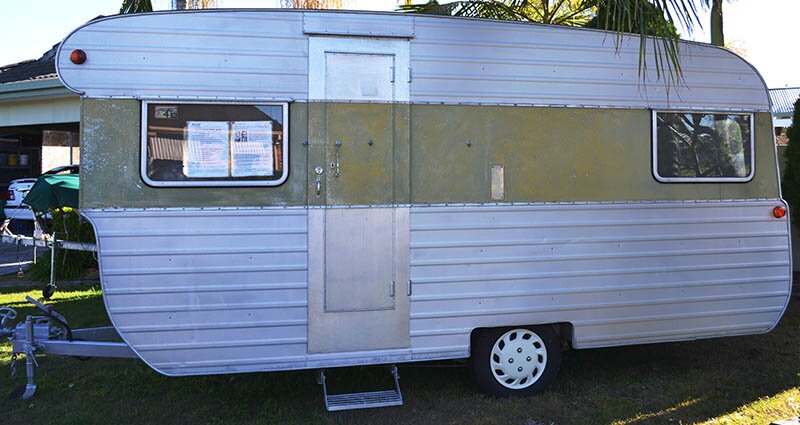 Her choice of colours in curtains and other furnishings was a step forward from the very bland basic look all vans had in that era.

Some of Millard’s success can most definitely be attributed to new ideas and innovations that paved the way for the future of the Australian caravan industry.

The brand name Millard was first introduced by John Darlington, using his middle name Millerd (with an ‘e’).

A check of family history websites confirms this Irish name to be interchangeable with the name Millard, so the origin of the Millard brand seems to have been derived by John himself.

By the mid 60’s the Millard business had grown so big that a new factory was established at Smithfield in the outer west of Sydney.

By 1969, the factory employed 250 and what records are available only show a monthly output of approximately 100 units.  This equates to 1200 vans per year, which doesn’t seem correct. Viscount records show they were making 5000 vans in 1970 and Millard were not far behind this figure in production or sales, selling through a strong and growing network of dealers Australia wide, marketing a range of 60 models, from 13ft to 40 ft. A more realistic figure for Millard would be 4000 vans per year, a bit over 330 per month. 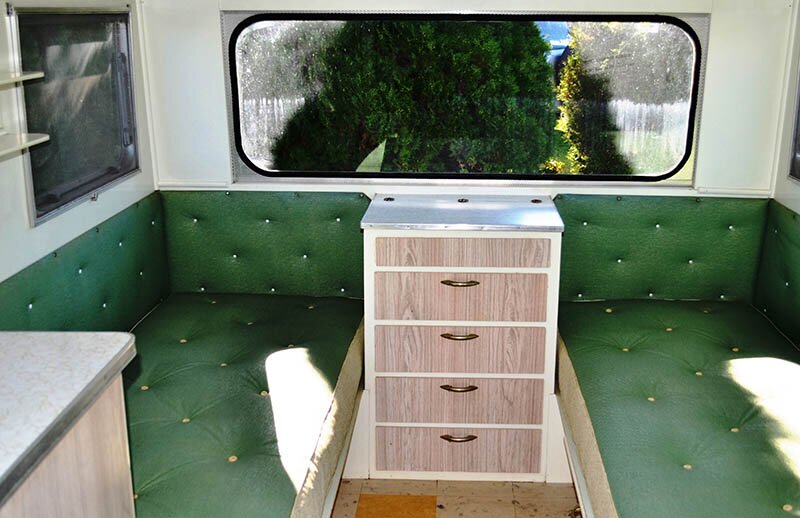 The Viscount empire though, after competing for many years with its main rival, finally bought the Millard company around 1980, and continued to build the iconic Millard vans in their massive factory complex at Liverpool with the introduction of the very popular and successful Series 80 model Millard.

The rest is history, but let’s concentrate on a particular Millard model which is of particular interest to me. We can find in The Sydney Morning Herald Archives, advertisements of the new model Safari by Millard in August 1963.

The advert boasted, “The Safari 12ft 6in caravan is the lowest priced, top quality aluminium caravan in Australia today.” The more deluxe model was the Millard Florida a slightly longer version at 14ft 6ins with a few added options.  The Safari model carried through to early 1966, when adverts for the new Capri model started appearing. When the new Capri came out to market by May 1966, it was a 15ft Deluxe model, with a 13ft basic Capri at budget prices. So it seems the Safari was then discontinued, but the Florida continued on and gets a mention in July 1967 as a new release Florida 15ft model.

Why the interest in these models you ask?  It just so happens that yours truly, as a caravan dealer based in the NSW town of Taree for the last 22 years, had been on a hunt, crusade you might say, looking for an old gem to display in a showroom. Finally after much searching, the gem found me. 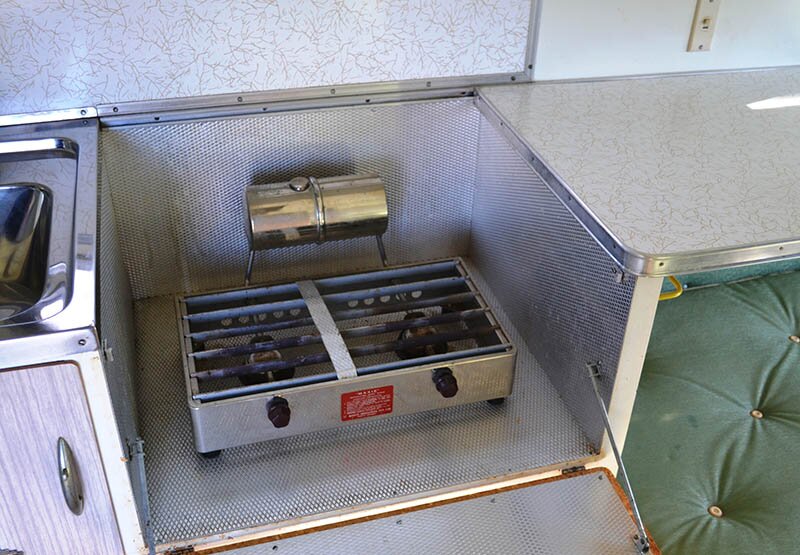 Out of the blue one morning we received a call from a local fellow who had recently inherited his fathers’ farm.   A very large farm it was, with many paddocks and hills and some very old sheds a top of these hills. One of these sheds was home to an old caravan. Having no need of an old van,the farmer phoned the nearest caravan dealer (me!) asking if I would be interested in looking to buy this old van.  The call had me travelling at the maximum legal speed until I got to some very rugged country tracks, eventually leading up a hill to a very old shed.

Inside to my amazement stood a Millard Florida approx. 1963 model (discovered later, by firstly measuring van at 14ft 6in and then by checking chassis number with Millard records).The farmer had bought it new, in fact the Florida had been used only a few times in its first few years, after which time it appears was locked in this shed and there remained for some 45 years.

Needless to say it was an instant sale and the start of a peculiar love affair. Unreplaceable original features of the era were not only there, but they were all in near perfect order. No fridge in those days, it had an icebox, complete with chest­type lever handle, and the stove,not electric, not gas, but good ol’ metho stove and still working.

A stainless steel sink (made in Australia) with a 50 year lustre that would out shine some new ones today. Original upholstery was still in excellent condition, the only sign of their age being the fact they are much heavier than those made with lighter filling today.

Being stored in the shed had also protected the exterior which was without even a single stone chip. All the rubber mouldings around windows and door also showed no sign of wear and were soon proved. I accidentally left the van out during a heavy rain storm one day and found not a single drop had leaked into the Florida, but ironically enough some of the new and near new vans around it at the time leaked like a sieve.

It was a real testimony to the precision and quality of workmanship of that era when things were built to a standard by tradesmen and not to an assembly line quota.  Everything still worked ­windows open, close and lock perfectly, as does roof hatch. All doors are precision cut and fit perfectly and so are their catches.

The electric wiring to my surprise still worked, even the globes! And this being the deluxe model it also had the alternate 12 volt wiring installed. But the best was underneath.  The chassis and all the running gear was in amazing condition,brakes and cables, bearings, springs, bushes, chassis, coupling  were still in very good working order.

The only parts needing replacing were the tyres which had cracked with age, although still had plenty of wear on them, along with some faded light lenses.

The Florida proudly passed a blue slip inspection for registration with flying colours. The inspector even commented on the incredible condition of the original bearings, the 13” Holden hubs and the chassis, all showing next to no sign of any rust. Not bad for something nearly 50 years old ! It was certainly the centre of attention whilst at the inspection station.

Today, after many exchanges of company ownerships, the Millard name is still proudly being affixed to new caravans from the company’s Sydney Ingleburn factory.

Now an entirely new company, Millard Australia, has revitalised the well known name and brought stability and strength back to this much loved brand.