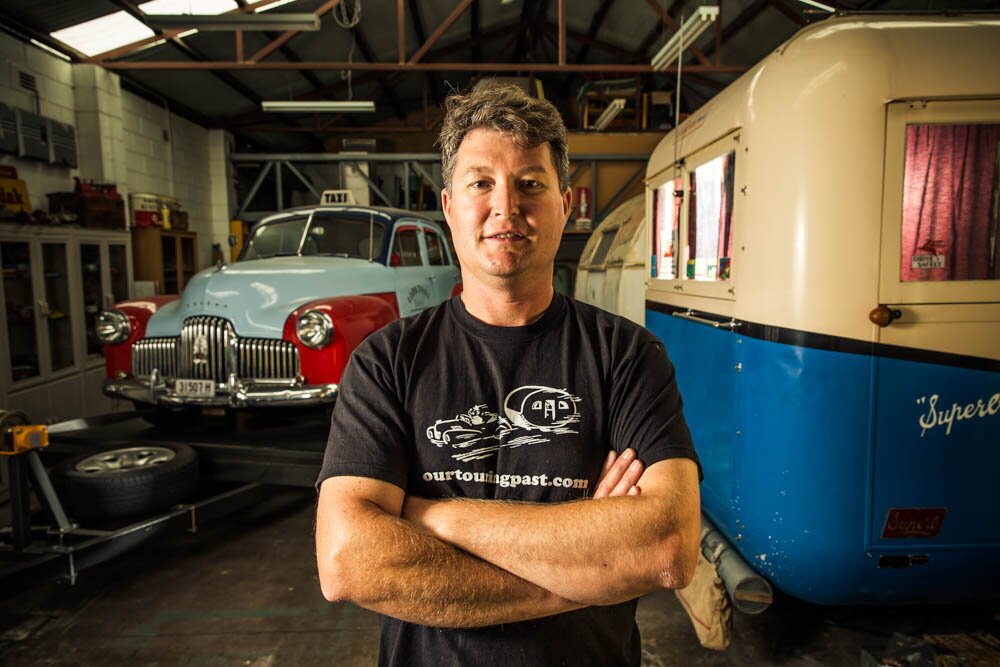 Richard Potter owns one of Australia’s most extensive collections of vintage caravans and cars.

As with many Australians, the Wollongong home builder’s passion for caravans goes back to childhood and fond recollections of family vacations.

Richard’s earliest memory is of a holiday in a 1968 hired Viscount.

“It was a 14 footer and Mum, Dad and all four of us kids would cram in – and Grandad as well. They were fun times.

“Finally in the 70s Dad was able to buy a Chesney. They were the height of style back then.

“Mum and Dad were members of the Chesney Caravan Club. They were such a popular caravan, there were four or five different clubs back then.”

“They haven’t really come back into favour yet, but I’m sure they will.”

Richard Potter’s hobby for collecting came much later, when the family received some sad news.

“In 1991 my mum was diagnosed with Alzheimer’s and she and Dad seemed to be stuck at home all the time. My brother Malcolm and I wanted to find a way to help get them out and enjoy themselves more.

The first caravan came soon after and as is often the case, rather than looking for it, it came to him.

Richard was on holidays in Coffs Harbour when he noticed the smart yellow 1950’s van sitting on the lawn across from his motel with ‘For Sale’ sign attached.

The holiday came to an abrupt end and Richard was soon towing it home to Wollongong.

Christened ‘Jabiru,’ it’s a superb piece of work of single 3/8” ply, including a tubular steel chassis and other advanced features.

“It was built by a panel beater in town of Urunga, just south of Coffs in 1958. He’d built it in a mad rush to get away for the Christmas holidays that year.”In a surprise turn of fate, Richard was able to get the whole history on the van with its original owner contacting with him after he appeared on the ABC TV show “Collectors”.

A few years ago Richard purchased a warehouse in the Wollongong suburb of Corrimal to house his collection. It’s so vast he had to stop and tally them up when we asked exactly how many.

There are 14 in all. Approximately half are restored and road-worthy and the rest are ‘works in progress’.

In addition to the ‘Jabiru’ and the Sunliner, there are two Dons, two Caraparks, an English Coventry Knight, a South Australian-built Rowvan, a ‘Cargill Caravanette’ from the mid-1960s, another home-built van and a 1950s camper trailer.

Also of note are two folding Propert caravans built in a factory in the well-heeled Sydney suburb of Vaucluse up until 1970.

It’s believed there are now about 40 Properts in existence and Richard may well have one of the first and one of the last of those still around – judging by the numbers stamped on the A frames – numbers 39 and 370.

Richard bought the Sunliner used in our cover shoot from a fellow vintage car club mate eight years ago.

“It’s one of the last three to come out of the Forster factory and it sat in a warehouse in Sydney for many years.”

Then there are the cars – four early Holdens- a 1950 FX Taxi, FJ Ute, Panel van and Special Sedan.

The collection has actually outgrown the warehouse, forcing Richard to house some in other people’s garages.

The first question that comes to mind is, how does the ‘other half’ cope with all this?

“My wife Linda and I married in 2007, but we’d been going out for 10 years so she had plenty of time to get used to the idea.

“We’re a family of collectors. Linda is a keen photographer and has over 200 Kodak cameras of various vintages”

Richard regularly takes visitors though his collection now evolving into a museum. He’s already set up a website to share information; www.ourtouringpast.com.

He admits to having slowed down in his collecting somewhat since his son Joshua was born last year.“I’ve made a promise to try to limit the collection just to the warehouse, so I won’t be buying anything more unless I swap it for something there already,” he said.

“Although I really would like to get my hands on a pre-1935 caravan. It would be a great addition to Australia’s only Caravan Museum.”

There is a Time to Roam feature in every one of Richard Potter’s caravans and we will look forward to visiting again soon.