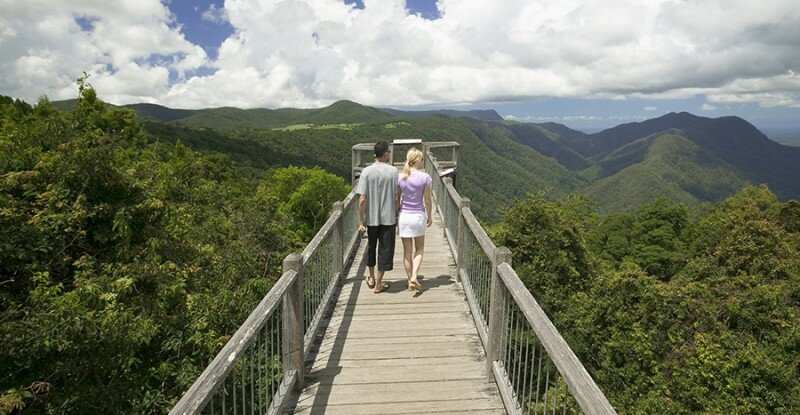 Caravanning along the Waterfall Way, NSW

East coast travellers have long debated the merits of taking either the Pacific or New England Highway routes. PETER LANGSTON suggests combining both, with a Waterfall Way detour.

The 200km route linking the New England city of Armidale and the Pacific Highway near Coffs Harbour takes in some of NSW’s most spectacular scenery as you climb or descend 1000m, depending which way you go.

Starting at the coastal end, you’ll find the Waterfall Way turnoff 2km north of Urunga or immediately after you cross the Bellinger River coming south from Coffs Harbour.

It’s a 12km run to Bellingen and the initial stage sets the tone for much of the drive. This is not a road to attempt in a hurry. It’s rich dairy country on the coastal belt, always green as a result of its annual 500mm rainfall.

The charming town of Bellingen boasts one of NSW’s most photographed main streets. Originally called Boat Harbour, Bellingen became the dominant port town of the area in the 1860’s. These days, Bellingen is an enclave of artists and is a great place to spend an hour or more wandering, whether you are interested in old buildings, knick-knacks, history or just want to watch a belly dancer on a street corner.

If you want a quiet spot to park the van in the shade and have a cuppa, find Park Street and pull into the Magpie Nest a beautiful little rugby ground with public amenities a short walk away.

If you have a sweet tooth, The Butter Factory as you drive into town or Lodge 241 as you leave, are both good haunts. For art lovers, Lodge 241 Café & Gallery, set up in an old three-storey Federation building, has some fetching works by local artists. 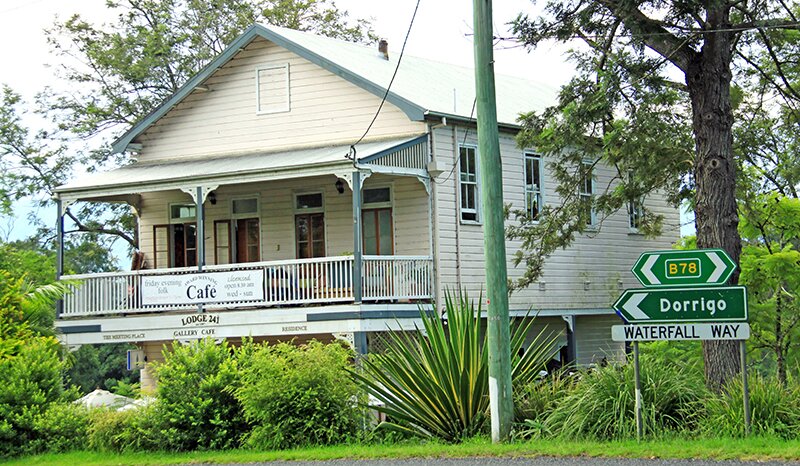 The next 15kms to Thora can be quite narrow, but even large vans should manage if you’re careful. It’s often a slow drive thanks to ongoing road works, but that just gives you a chance to enjoy the scenery as it changes from green farmland to thick forests approaching the base of the Dorrigo Plateau. The Bellinger River is your constant companion until you cross it just before the petrol station, which is basically all there is to Thora.

It’s another 15kms to Dorrigo, two thirds of it upwards, some of it steep and almost all of it winding. There a few very short sections which are single lane, but as is the convention, climbing traffic has right of way. Along the route you’ll pass waterfalls small and large, cascading down the cliff faces to your left. There is a wide stopping bay at Newell Falls, as you near the top of the ascent and it’s well worth a stop for photos.

When you pass the Lookout Motor Inn you have reached the top and an immediate left turn into Maynards Road, then Mountain Top Road will take you to the long view from Griffiths Lookout. Be warned though, it’s not for vans – single lane at best and a limited turning circle once there. 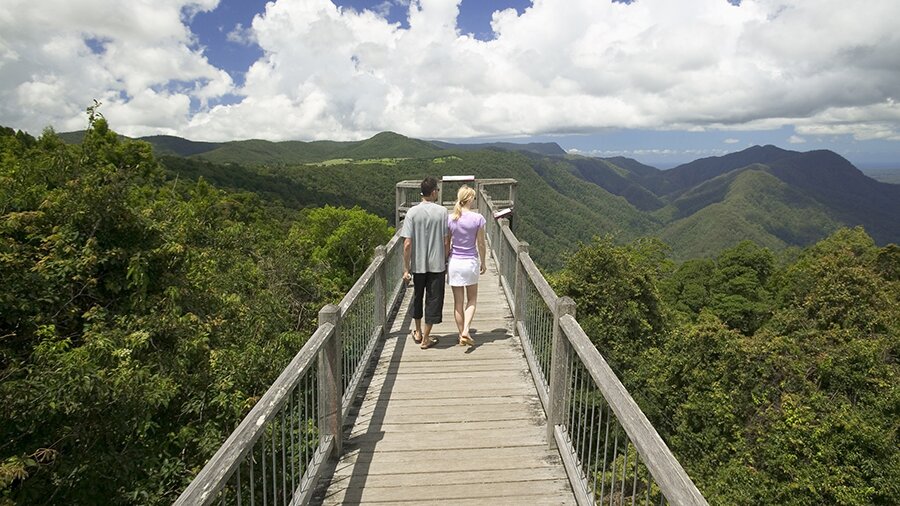 A better bet would be to take the right turn into Dorrigo National Park soon after. For those with a normal level of fitness, the Wonga Walk will give you access to all of the delights of the rainforest.

The reward for your effort comes after thirty minutes walking, when you at first hear and then catch sight of the Crystal Shower Falls. A high suspension bridge crosses the face of the falls, which free-fall 30m into a splash pool. On the far side, a track leads you down onto a steel grated path passing behind the curtain of water. It’s a unique place luring photographers like a siren song.

Ten further minutes will bring you to Tristania Falls, where the water rushes across the surface of the steep rock face in a series of random paths and smaller pools. A suspension bridge takes you over the falls as they track from above you to below and beyond, disappearing over the rocky edge.

If you drive into Dorrigo and turn right, the road to Coramba will take you to Dangar Falls, on the outer edge of town. If you are limited in your ability to walk, ramps provide you with a good view of a classic waterfall right beside the car park. Picnic tables make it a great spot for an alfresco lunch. 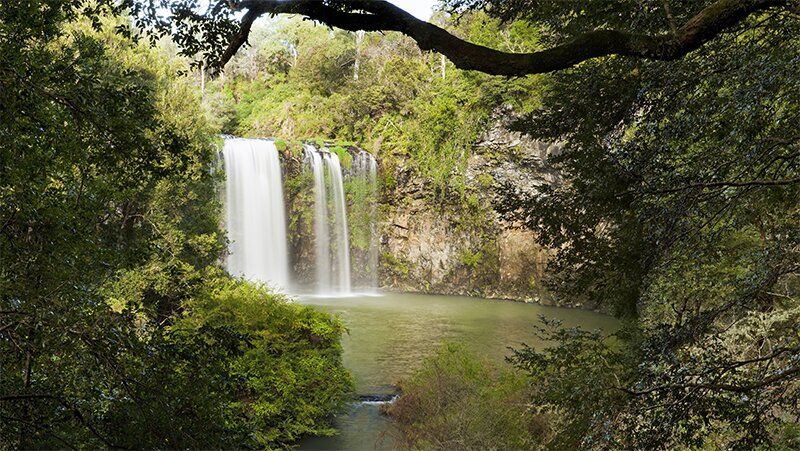 Back on the track west, the road from Dorrigo crosses the ridge line revealing stunning views across rich dairy country. If you can stop – and spots are few and far between – a clear day photograph here will be the envy of your friends.

Just 40 minutes after Dorrigo is the tiny village of Ebor. Typical of many such towns across Australia, it has a two-pump petrol station, school, hall, pub and a store. Stop at the store, Fusspots at Ebor and you’ll not only get a better than expected cup of coffee or a variety of teas, cakes that melt in your mouth but also a chance to experience real country hospitality.

Just outside Ebor are probably the most eye-catching and certainly the most accessible of the falls along the Waterfall Way. With both an upper and lower falls, Ebor Falls offers a full sensory experience. The viewing platform for the upper falls is right beside the car park and is so close to the falls. On days with high volume flows, your camera lens needs to be cleaned regularly of spray from the crashing water.

After Ebor, you may choose to leave the Waterfall Way and head across the tablelands through cattle country, once the home of famed poet Judith Wright. You’ll meet the New England Highway at Guyra: famous for its fine wool, potatoes, and truss-grown tomatoes, not to mention cold days and lazy winds. 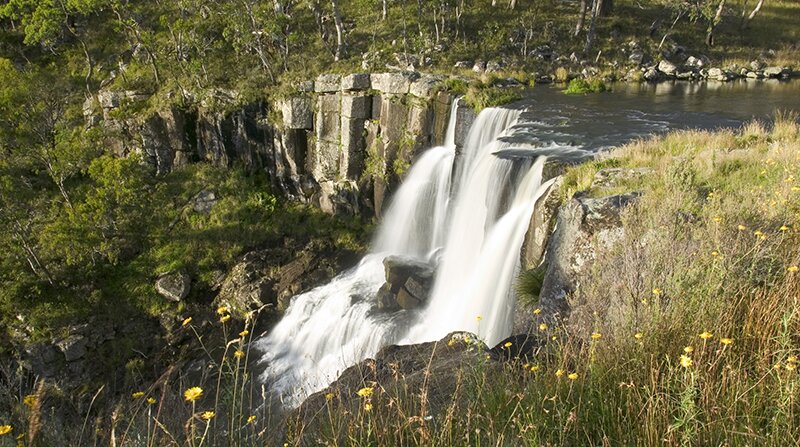 There are greater rewards if you stick with the Waterfall Way. The turn off to Cathedral Rock, with its athletic climb to the top of the huge granite dome, comes up on the right and soon after. From this high point, the Waterfall Way begins a slow descent over 80kms into Armidale, across the increasingly undulating slopes of the Northern Tablelands.

On the way you will find Wollomombi Falls at the very northern end of the expansive Oxley Wild Rivers National Park. The falls themselves, the place where the narrow Wollomombi and Chandler Rivers meet, are the third tallest in Australia as they face south in a narrow gorge.

There are good picnic facilities and plenty of space for vans. A steep walk down to the river is for the fit but worthy of the effort.

Bakers Creek Falls, the last before Armidale is perhaps the freakiest falls along the route.

It’s an unremarkable series of drops, however the site has been the scene of at least five murders as well as a widely reported UFO sighting in 1978. 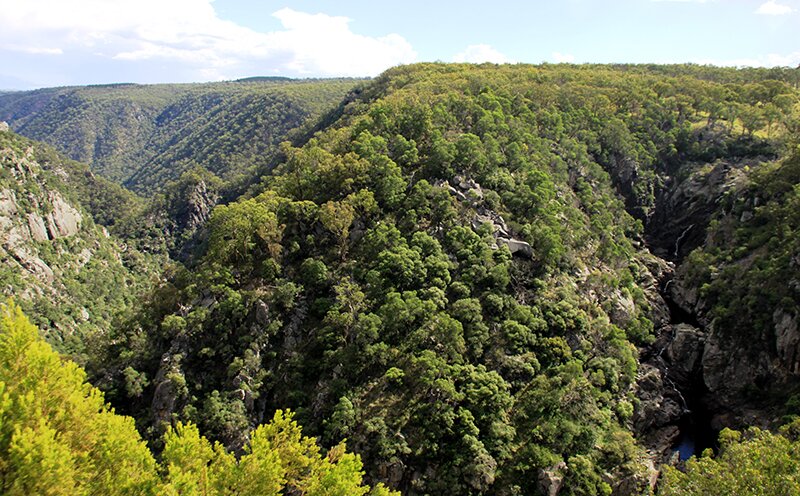 A word of warning, the road is not at all suited to caravans so be sure to unhook in the town of Hillside. The access driveway and parking area are deeply rutted and it looks abandoned but if you are game, it offers a different, somewhat eerie experience.

The remaining 20 minutes to Armidale is an easy run. Stay a few days and enjoy the fine architecture of this wealthy rural city including the two main churches and the old Teachers College, standing in its dominant position above the city on South Hill.

There are a number of short drives to scenic spots around Armidale, including The Blue Hole out along the Castledoyle Road on the Gara River and Gostwyck Chapel, to the south, best seen in the autumn as the Virginia Creeper goes red and the backdrop of elm trees go gold. Also worth a look is Saumarez House, the White family’s 30 room Edwardian mansion built in 1888. The property once owned by one of Armidale’s original settlers, Henry Dumaresq, is a time capsule of New England history.

In Armidale, at the end of your day on the Waterfall Way, while watching the sun creep below the western Bundarra Hills, enjoy a sundowner and share your experiences so that others might discover this spectacular drive.