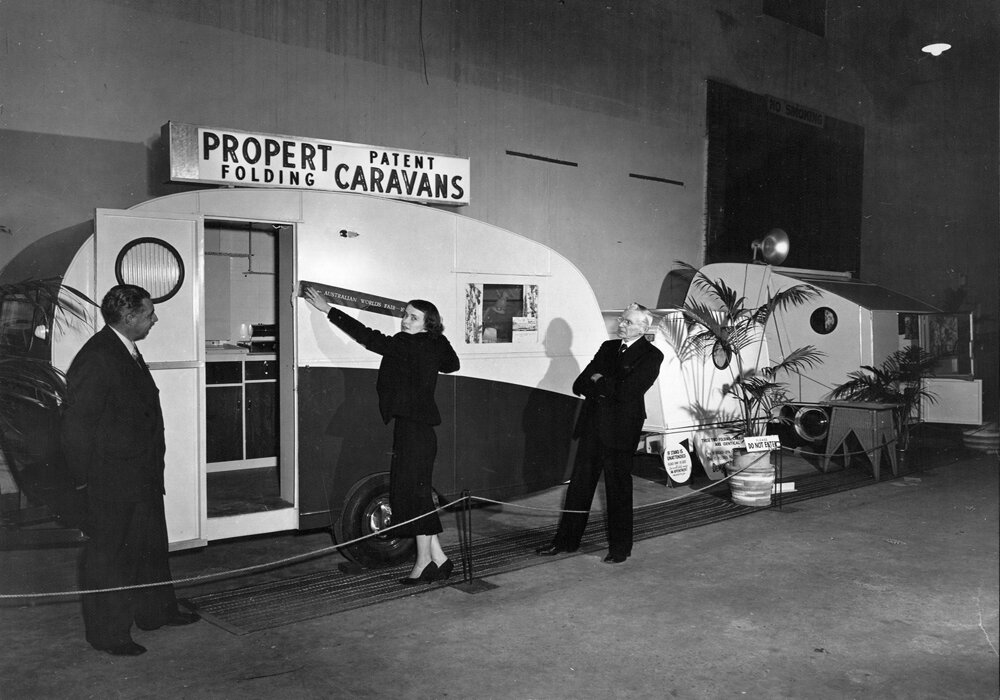 A family of great inventors

If you grew up in Australia in the 20th century, chances are your life has been made easier by a Propert.

Folding Caravans are one of many treasured products designed and built by this inventive family.

John and Emma Propert emigrated from England in 1877 and produced 11 children including several sons with a knack for design and innovation. Thomas and Albert Propert trained in coach building in Orange NSW and established a motor body business in the inner Sydney suburb of Newtown in 1910. In the years when Australian car manufacturing consisted of building bodies on imported engines and chassis, Propert established a reputation for the very best luxury vehicles.

Perhaps the most successful Propert son was Charles, who designed and built kitchenware over many decades.

He started out making irrigation equipment and is credited with inventing and patenting the common backyard rose sprinkler, still manufactured and sold in their hundreds today.

Propert became a household name when it started making all manner of kitchen implements decades including flour sifters and chip cutters. In the 1970s Propert was Australia’s leading brand of kitchen and bathroom scales. By far the most successful product was a ball-driven egg beater, trademarked as the Ezy Whisk.

In the days before electric beaters, the Ezy Whisk was the market-leader and exported world-wide.

Adverts in the 1950s boasted they’d even been endorsed by royalty. Apparently Queen Mary was most impressed when she was shown an Ezy Whisk while visiting London Expo one year. Whether Her Royal Highness had any idea what the domestic appliance was used for is doubtful.

For ordinary Australians without electric appliances or domestic help, the Ezy Whisk was an indispensable kitchen aid. Charles Propert and his son Bertram manufactured more than a quarter of a million egg beaters a year in the early 1950s, reason why so many are still around and used even today.

Thomas Propert and his son Thomas Junior were the behind the Propert Trailways Products division which grew out of the motor body business in Newtown and began building caravans behind a house in the upmarket suburb of Vaucluse in the late 1940s. Success came after the war as more families took to the road and Thomas saw the need for a light-weight van that didn’t require a big American V8 to tow it.The Propert Folding Caravan is yet another ingenious design. Even today it’s hard not to marvel at how the three shells fold out of a box trailer to make the vehicle double in size.

Entry is through a rear door and inside is light and airy, with seven windows including a skylight.

There’s a double bed over the raised area up front, a kitchen down one side including sink and stove. A table is hinged on the wall opposite and below that is a bench which can be made into a third bed, albeit for a very short person. While it has become known as the folding caravan, in some ways it has more in common with today’s popular camper trailers. In fact the Properts were originally sold as “trailer cabins”. Today’s camper trailer owners would surely marvel at how quick and easy the Propert is to set up.

The Propert folding mechanism was first patented in 1952, with subsequent patents taken out in New Zealand, US and England. Other folding caravans built in Australia at the time include the “Smal-a-Van” made in Unley, South Australia and the “Foldvan” by C.T. Woods of West Preston, Victoria.

Thomas Propert Senior passed away in 1969 and production continued in Vaucluse until 1972 – the folding caravan era coming to an end just as the pop top caravan age had begun.

It is testament to the Propert family’s record of great Australian design that Propert caravans are today part of the collections of both the National Museum of Australia and the Powerhouse Museum in Sydney.