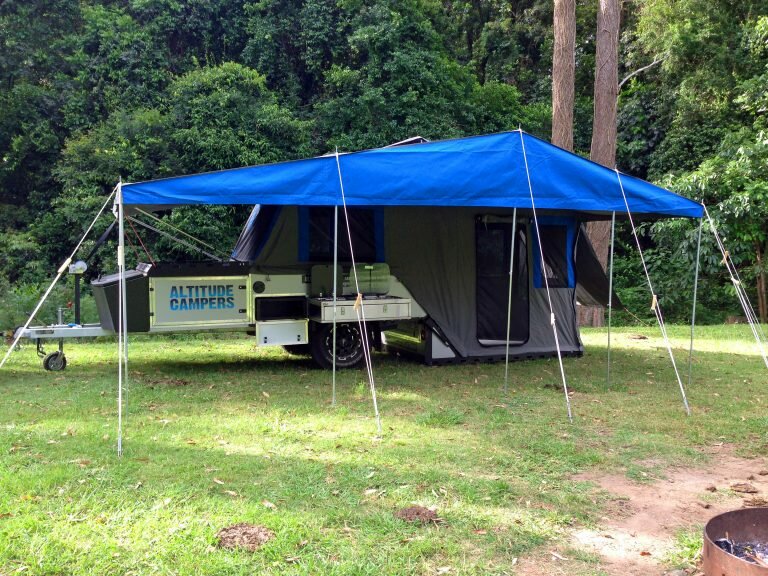 Raising the stakes in off-road comfort

Altitude rises to the buyer’s challenge for a better, stronger and lighter camper

The world of camper trailers in Australia is surprisingly fast moving and evolving.  New models appear and are upgraded in a matter of months.  To stay ahead of the game requires a willingness to upgrade, adapt, modify.  There lies the road to long-term success in this business.

Altitude Campers is a relatively new company, but at its heart is its founder, Brian Johnston, who built an empire with the Johnno’s Campers brand, then moved on to settle for a smaller, more discreet business.

Altitude produces only two basic designs, rearfold hardfloors and sidefold softfloors.  They’re exceptionally well made, without many of the little details that are nice, but add to production complexity and cost. Altitude believes in giving you what you need rather than what looks good.

The latest model is the ALX-200, which has a number of upgrades over its predecessor, the Ultimate, making it an even more attractive proposition.  The body is still made from aluminium, but the Tare weight has increased to 1150kg.  However, there are several significant additions to the camper as supplied so the weight increase has to be expected.  The GTM remains at 2000kg which still leaves a whopping 850kg of load capacity.  That’s more than enough to cater to even the most gadget conscious camping family.

In keeping with modern design practices, the whole camper is first mapped out in 3D CAD software for an all-Australian build. 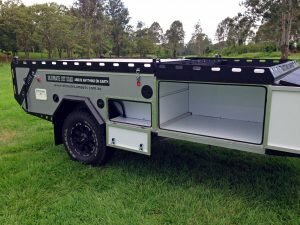 The drawbar has been strengthened, going from 100 x 50 x 4mm to 150 x 50 x 4mm in size.  A strong frame underneath is the foundation of any good offroad camper.

The same sturdy chassis and Cruisemaster trailing arm independent suspension carries the load on 12in brakes and high load alloy rims with 265/75 R16 tyres.  The spare travels on a rear swing-away arm.

The stainless steel kitchen can function as a self-supporting unit at 90 degrees to the camper body or be swung around to operate parallel with the trailer centreline.  Updates include a bigger pantry drawer and more bench space with a flip-over extension.  An 80 litre Waeco fridge freezer is standard and can be upgraded to a 95 litre for an additional $660.

The electrics have also been updated.  There are two 120Ah AGM batteries with a Redarc 1230 battery management system, probably the best option out there now when it comes to mobile electrical systems.  There is a single LED strip light, bedside reading lights, five 12V outlets, a double USB outlet, 240V inlet and outlet and an Anderson plug to take charging from the tow vehicle’s alternator.

All the door seals have been improved and hinges upgraded.

The camper can be set up in a matter of minutes, the tropical roof remains attached and sets up automatically, and the 6000 x 2100mm awning requires just five poles and no spreader bars for ease of set-up. Awning walls are optional.  An ensuite is included as standard.  All the canvas is Australian Dynaproof with 12oz roof and 10oz walls.

Internally there is an under-bed drawer for easy access and a queen inner spring mattress.

Up front there’s a roomy boot area where dirty and messy items (water heater and fuel, jerry cans, gas bottles) are kept out of the weather and there’s another large storage area on the driver’s side.

At $48,990 the Altitude ALX-200 has moved away from its more budget conscious origins, but this reflects the standard of fitout customers now expect, so why make many things optional when everyone is ordering them as standard anyway?  Altitude Campers continues to hit the target with a smartly put together package.