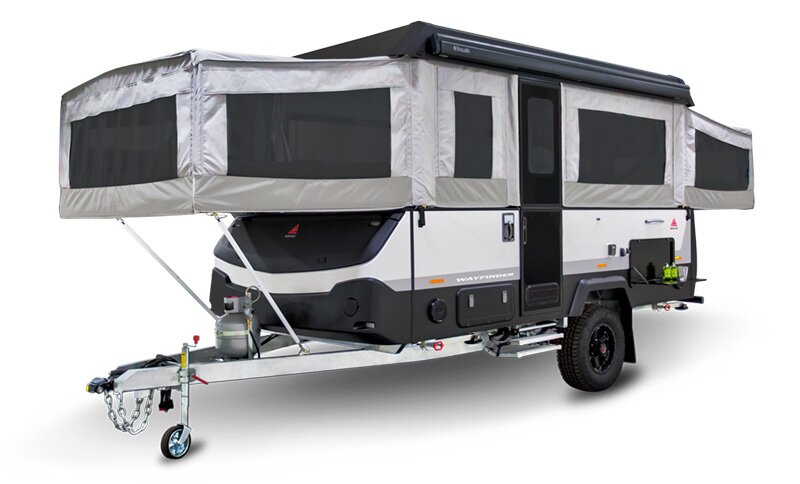 Earlier in the year, New Age Caravans, with the help of major shareholder Walkinshaw Automotive Group, showed off its rebirthed camper trailer – the Wayfinder, which replaces the Road Tripper, another camper trailer line the company released in October 2016. The old and the new certainly share some similarities, although New Age has said that there’s been significant ground up engineering done by Walkinshaw on the Wayfinder.

Aesthetically, the Wayfinder is the best-looking of all the wind-up camper trailers on the market, right now. While Jayco has its bright stickers and very familiar look and Goldstream manages a rugged charm, the New Age is as sleek and modern-looking as a camper trailer can be, thanks to its sloped front and clean lines, and maybe due to the fact it doesn’t have any squiggly-line decals running down the side. 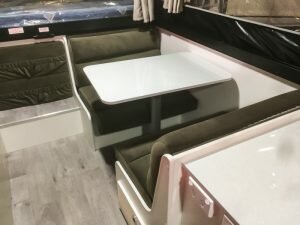 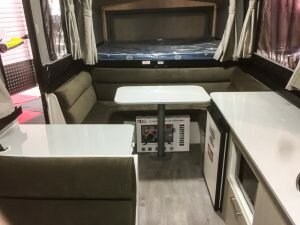 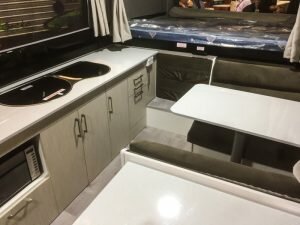 Initially it’ll be available in two layouts, which are expected to go on sale in July (although it’s been displayed at a number of shows, so orders are being taken). One will be a traditional family version, with slide-out beds each end, while the other is expected to appeal to couples, with the bed and living areas all contained within the straight-up-and-down canvas walls, similar to the Jayco Penguin.

Inside, the Wayfinder is quite nice, very typical of New Age’s commitment to modern and comfortable living spaces in its caravans and trailers. The family version, which I had the best look at, has a very accomodating floorplan, which has two seating areas, a long and well-featured kitchen, and of-course, the two double beds. I expect both lounge areas can also be converted into beds, so there’s provision to sleep up to seven people, at a pinch.

The kitchen has a three-burner stove, stainless steel sing, an under-bench, 93-litre three-way fridge and small microwave. Typical of these campers, the bench height is a little low, although there’s heaps of it, which is nice if you’re cooking big family dinners. Storage is adequate around the camper, although there’s not oodles of it, and the most accessible is around the kitchen, so expect to be a bit inventive in where you’ll find places for clothes and bedding and the like. 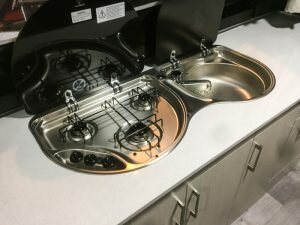 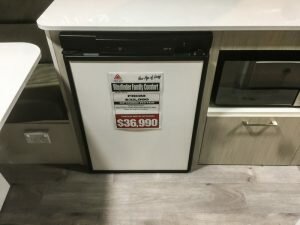 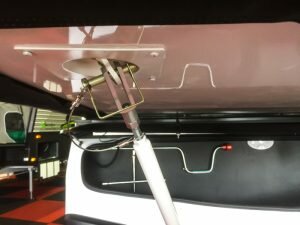 We didn’t get the chance to have a go setting it up, although the bed ends are on high-quality rollers and the support struts holing them in place look like the tie-rod ends from a modified 4WD, so New Age Caravans isn’t taking any chances on durability. The companies instructional video does show that the canvas sections don’t stay attached to the beds on pack-up, which will leave the mattresses exposed to the weather for a short time, which is not ideal if you have to set up or pack up in the rain.

The chassis has been designed with input from Walkinshaw and as well as featuring modern weight saving features, it’s hot-dip galvanised, so it’ll last the distance, we expect. A range of suspension options are available, including AL-KO Outback Enduro, in the more off-road oriented options. Prices range from $28,990 for the base-model two-birth version, right up to $42,990 for the most off-road family version, which puts it at the higher end of the camper trailer market, but not quite the highest.