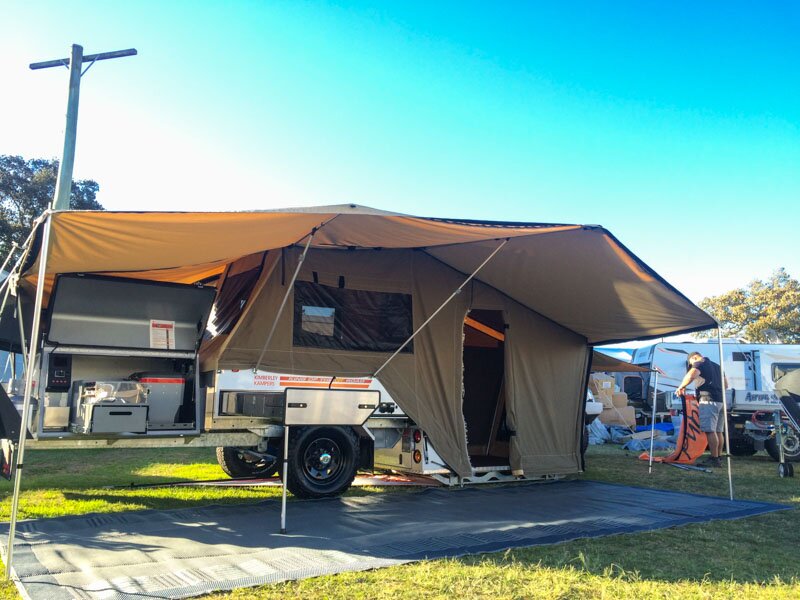 Ballina-based off-road camper trailer and caravan manufacturer has had its fair share of controversy over the last 18-months, but the innovative, tech-heavy builder is proving harder to kill than Game Of Throne’s Jon Snow.

This weekend the company, under the new ownership of James Cockburn and Brett McLaren, had four products on display at the Hunter Valley Caravan Camping 4WD & Fish Show at Maitland Showgrounds. The models included two campers, a Karavan and E-Class off-road caravan. All had been built in the company’s historical Ballina factory, but represented the first of the new breed.

James Cockburn, who was in attendance at the show, told me that this was just a soft-launch as they get ready to officially start taking enquiries and orders at the upcoming Brisbane Caravan Show in June. “At the moment we are just concentrating on fulfilling existing orders to customers who have had to wait a little while for their products,” he said.

As such, there’s little change to the spec of each of the products, although it seems Kimberley has relaunched the Classic camper trailer model, which should bring the price of entry into the Kimberley brand a little lower than it was when everything hit the fan in the middle of 2018.

As Kimberley is concentrating on building campers that were ordered up to 12 months ago, the company is not focussed too much on immediate product changes, although some things have. Back on board at the orange and red decals, while the campers revert back to green canvas, rather than the silver-grey being used in 2018. Cockburn has said they are focussed on improving construction efficiency, though, so all the variants will carry common product – like battery boxes and electrical centres – the battery box fitted to the camper trailer will be the same fitted to the Kruisers, for example. All Kimberley Kamper products will be fitted with lithium batteries, too.

They’ve also started bench-building cabinetry and then fitting complete cabinets to the Karavans and Kruisers, rather than having them built insitu.