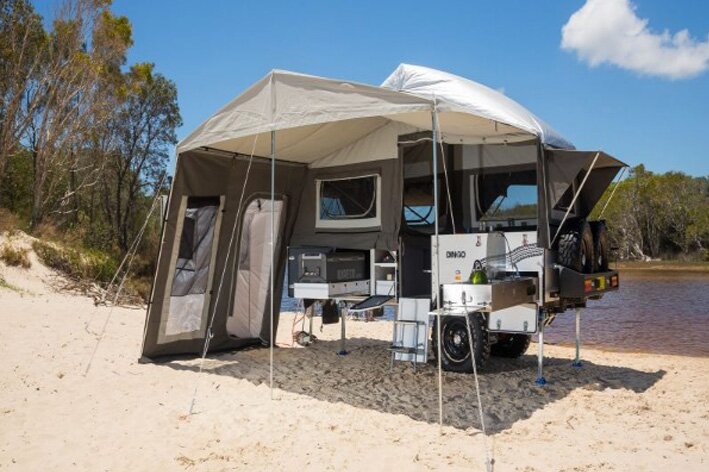 Skamper Kamper is one of the leading proponents of the forward fold, with its popular Dingo model.   While manufactured overseas its campers are assembled and finished off in the company’s western Sydney workshop where they get the sort of individual finishing touches that set it apart from the many other versions of these campers on the market.

The forward fold design creates a number of attractive features.  Firstly there’s a hard floor well clear of the ground.  For those concerned over creepy crawlies, damp or even heavy rain there’s substantial and comfortable internal space with an immediate connection to  the outdoors via a zip-out side panel on the main tent.  The footprint that doesn’t become any longer than the camper, making set-up in tight spaces easy.

On the outside is a stainless steel kitchen with a bench extension which slides out from under the rear seats with a three-burner cooktop and a stainless steel sink.  Adjacent to the entryway into the lounge is a storage drawer, generally used as a pantry, with a fridge slide in front of that capable of taking large sized models.  Over all of this is an awning which can remain attached during pack-ups so that it is instantly ready to erect when you set-up camp.

It’s quite a package for $17,000, including a fold-over boat rack.  With a very reasonable five year structural warranty and 12 months on the canvas and fittings, it’s fully supported no matter where you go.  With agencies in Tasmania, Canberra, Sydney, Melbourne and Brisbane there’s plenty of opportunities to take a look at a Skamper Kamper Dingo at any time, or catch them at your next camping show.

For the full review and specs, see Issue 25 of ROAM