Back in issue 28, we highlighted the history of Flxible Clipper coaches and the impact they had on road travel through the 50s and 60s, and now as transformed motorhomes. Not long after, we heard from Larraine Hobbs, whose father drove the coaches for 27 years. Amongst many happy memories from his time as a ‘coach captain’ (see the pictures below), he was also the driver of the coach which crashed on Jenolan Caves Road in 1962.

Written from his hospital bed on the 12th of January 1962, Aubrey Raymond Gross details the events that led up to his Flxible Clipper Coach rolling off the road during a tour to Jenolan Caves on Friday the 5th of January. Following the crash, a coronial inquest found Ray was not at fault, and that the gravel roadside collapsed under the weight of the bus, causing it to fall 272 feet off the side of the road. Four women were tragically killed.

For more great stories from the history of caravanning and camping in Australia, subscribe to ROAM. 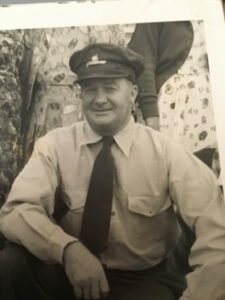 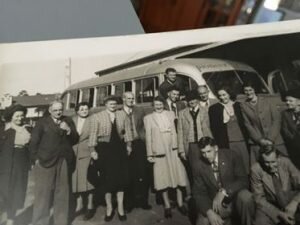 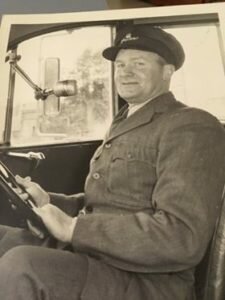 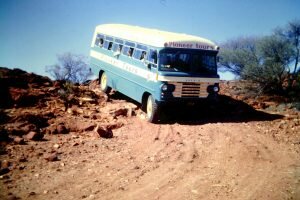 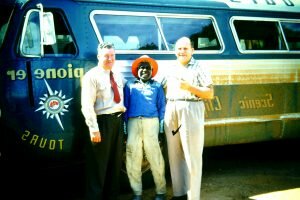 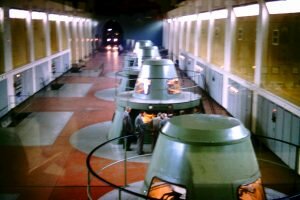 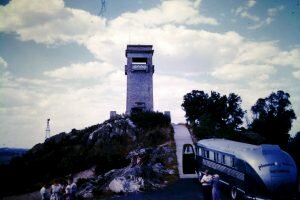 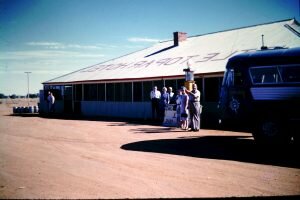 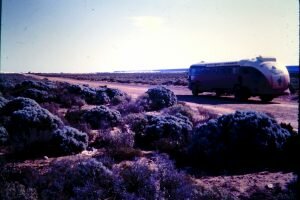 At 8.30 a.m. on Friday, the 5th instant, I left Sydney driving a Leyland Tiger Coach Unit No. 309 on a one day tour to Jenolan Caves and I had 32 passengers on board. I drive as far as Valley Heights on the Blue Mountains where we had morning tea and I left there at my scheduled time. I then drove to Kelly’s Half Way House at Hampton where we had lunch. I arrived there at 12.10 p.m. and we left there on time at five past one, that is the scheduled time of leaving there.

Whilst travelling over the mountains misty rain was falling and conditions at times were foggy. When I left Hampton for the Caves House where I was due at 1.55 p.m. a distance of which I am not certain.

Having driven the Caves Road since I first commenced working for the Company I have an outstanding knowledge of the while of the way to the Caves House and I have travelled it on hundreds of occasions driving for the Company. When I reached what is know as the top of the five mile hill I put the engine into third gear and went along the road for approximately 400 yards until I came to the start of the worst section on that road and I then reduced into second gear. I sounded the air siren on the coach at every bend I came to as had always been my custom. I think I had travelled just over half a mile down the five mile hill when I rounded a sharp left hand bend then I rounded a slight right hand bend approaching another sharp right hand bend. As I approached this sharp right hand bent I was on my correct side of the road and I saw a two tone Holden Sedan, either 60 or 61 model with a biscuit or creamy coloured top on it come round the bend in the opposite dire ction (sic) to me and as it did so it was at least three quarters of the way over on its incorrect side of the road. I would say when I first saw the Holden Sedan it would be 30 to 40 feet away from me and it was travelling at what I consider a very fast speed for that particular section of the road. Realising that a head on collision was iniment (sic), I swung my front wheels about 18 inches further to the left. As I swung to the left i jammed the brakes on and by that time the nearside front of my coach went off the bitumen surface and into the soft earth on that side of the road. I felt the front wheel sink into the soft earth and I swung hard in and effort to pull the front round to the right but the steering would not answer and I could feel the coach slowly sinking into the soft earth and it gradually settled down, stopped momentarily and turned over and over down the mountainside. While I am not certain I do not think the nearside rear wheels were on the soft earth when the front wheel started to sink in.

I can remember the bus turning over four or five times before I was thrown out and when I looked there was a large tree across my back and I could not move. There was a man and a women who had been sitting in the front seat on the nearside of the bush they were also lying on the ground close to where I was. I could also see the bus had gone on some 30 of 40 years further down the hill and was stopped but the wheels were still turning and I could hear the motor still running. While I was pinned under the tree a lad who had been a passenger in the bus struggled up to where I was and I then explained to him how to stop the engine. The lad left me and went down. I could see the rear wheels on the bus stop and I knew then he had stopped it. I was punned under the tree for over four hours before I was released after which I was conveyed to the Bathurst Hospital and admitted there.

The manner in which I drove down the five mile hill in second gear was the same manner in which I have at all times driven along that section of road. Travelling in second gear down the hill the vehicle would not exceed 18 miles per hour but on this occasion as on every occasion I have travelled the same road on the way to the Caves I have never exceeded 10 miles per hours. Having such and excellent knowledge of the road and the conditions I state emphatically it would not be possible to exceed 20 miles per hour on what is known as the five mile hill section to drive safely. I am quite certain that if that speed was exceeded by a coach it would not remain on the road and the turns could not be negotiated. While I only observed the on-coming Holden Sedan Car for a second, I clearly saw a man driving the vehicle and a lady in the front seat with him also a small child standing on the seat between the driver and the lady. I can remember glancing at my watch just before the accident and it was 1.37 and I realised I was right on time and that I would arrive that Caves House in time for the Caves inspection.

When the nearside front wheel started to sink into the soft earth the vehicle and practically stopped and I doubt if I was travelling any more than 3 to 4 miles per hour when the bus stopped. 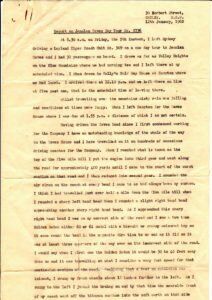 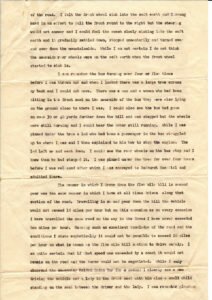 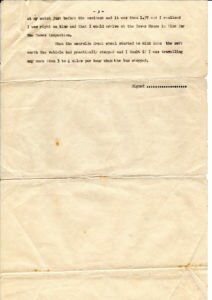 Do you remember travelling in one of the Flxible Clipper Coaches as a child. Tell us about your trips in the comments below.