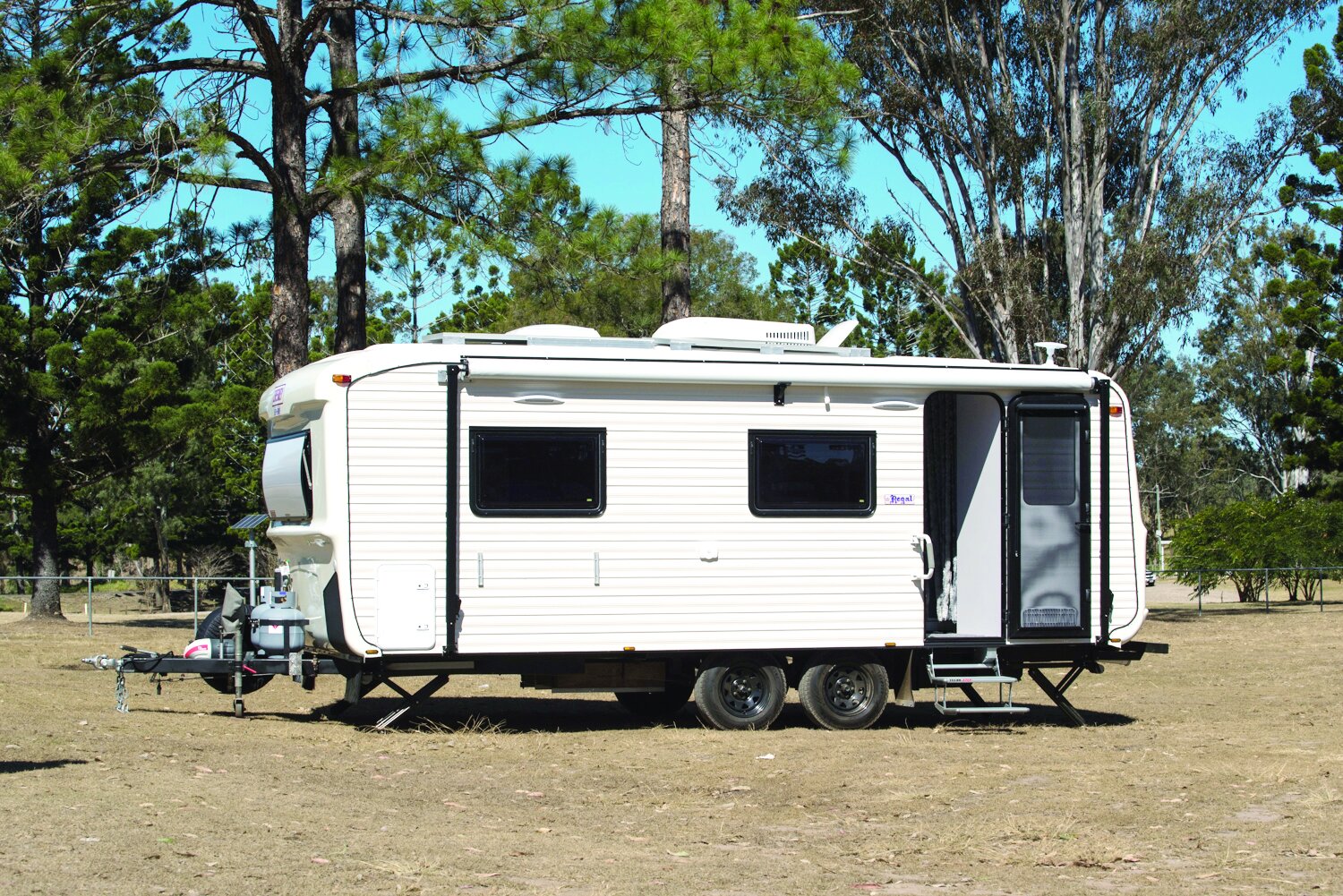 Rod West grew up on the Gold Coast at a time when the region was growing rapidly and tourism was becoming a major industry. He was called to national service in 1967 and shipped off to the Vietnamese peninsula with 60,000 other young Aussie men.

When he returned two years later, he couldn’t settle down so spent nine months on Groote Eylandt, off the east coast of the Northern Territory. When did finally settle down, he met his wife of 40 years. They bought themselves a caravan and immediately headed off on a mammoth, cross-country trip taking them all the way to Perth and back, the trek becoming far more accessible as sections of the Eyre Highway had just been sealed, but not altogether easy, just the same. The van they did it in was an 18’6” Chesney Regal – the very same type he’s just spent two years restoring.

The Regals were amongst the first of the Chesney’s to be fitted with a single piece fibreglass roof, which made them far superior when it came to water leaks. According to Ron Chapman who worked at Chesney Caravans during this period, when Chesney first released them, an upside-down roof full of water was put on display at shows to prove they were water tight.

“I’d been looking for a vintage caravan, particularly a Chesney, for a few years. There was  a really good one just up the road from me, but the guy wouldn’t sell it. So I got on Gumtree and this one stuck out. I got it up from Sydney sight unseen, I paid $5500 for it and it cost me $700 to get it up on the back of a truck.”

Rod tells me he’s sort of glad he bought it without looking at it, because if he had of, he probably wouldn’t have bought it at all. “When I opened the door for the first time, I thought to myself that I’m glad I’m pulling it to pieces.” 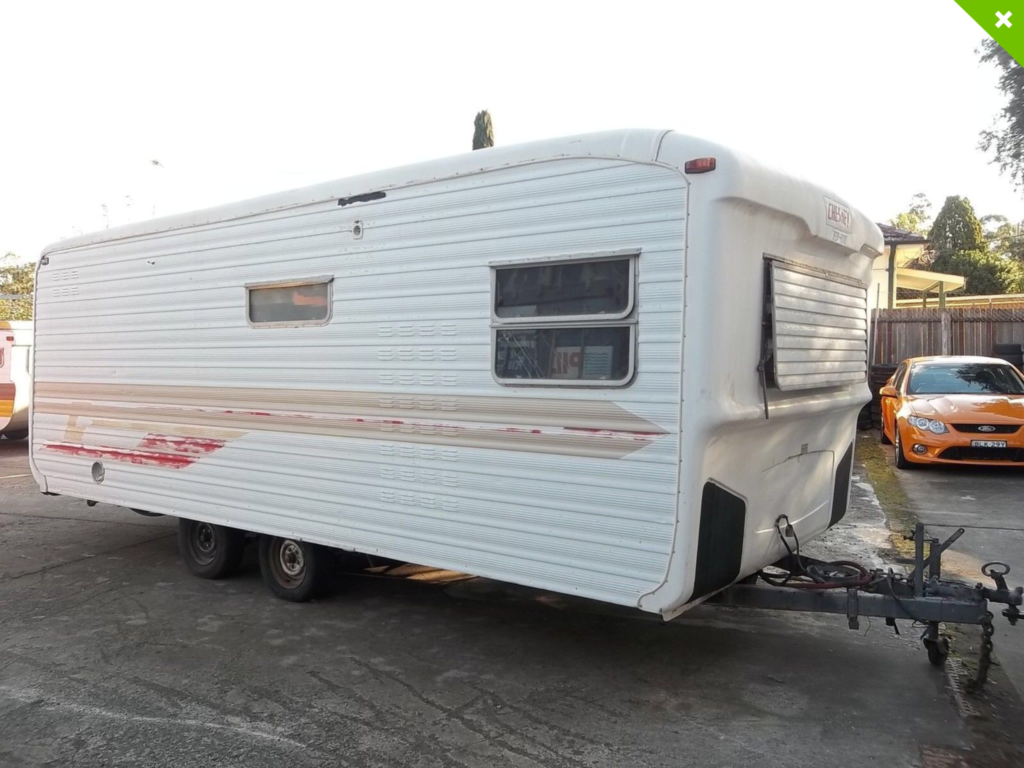 And pull it to pieces he did. Rod parted out nearly the entire caravan to restore each part individually. “We stripped the whole thing back to the chassis and I took it down to a sandblaster who stripped it all back to see what condition it was in. The A-frame was a bit dicey, but I had to extend it anyway, so it didn’t matter too much.”

OUT WITH THE OLD, ON WITH THE NEW

With the chassis all sorted, Rod fitted a roller-rocker, leaf spring suspension system – similar to the original specification. He then upgraded the brakes, fitting AL-KO hydraulic discs controlled by the company’s IQ7 hydraulic brake booster. This system is typically used on large boat trailers and uses stored compressed air to activate the brakes in an instant which, according to Rod, is far better than any electric system he’s ever used. “They cost a lot though, which is I guess why most caravans don’t use them,” he says. With the new brakes, suspension (now sprung over, rather than under) and axles, there’s a little more clearance under the van, so Rod’s fitted 14in wheels, instead of the 13in originals. The stabiliser legs have also been automated, so Rod can lower them by remote control.

Rod also pulled the interior out, all of the cladding off and hoisted the caravan’s roof off the bare frame. While the chassis was away being worked on, he started on the roof, coating it with four applications of ceramic heat reflective paint, and tidied up the floor, which is still the original, single sheet of ply. The original aluminium frame was still in very good condition, so with all the major work done to the roof, floor and chassis, he set about the long task of putting it all back together.

The original cladding was not in great condition, so Rod set about calling every old Chesney dealer and repairer he could come across asking if they had any old cladding lying around. Amazingly, he found someone (but won’t tell us who), that had a cache of unused, essentially new (except that it had been in storage for four decades) cladding, in the same profile as the original stuff. He bought 16 sheets, used 13 and keeps the secret of where he got it closely guarded, in case he decides to build a second van. All of the windows have also been replaced, but with modern double glazed versions – not just for the insulation properties, but because the old ones were not very serviceable.

Rod’s attention to detail inside is nothing short of incredible, although it’s far from original. In fact, the only original interior feature is the two sliding glass panes in the cupboards over the dinette. Front to back, he’s had a marine cabinet maker rebuild the entire area, complete with 6mm granite bench-tops, soft closing drawers and doors, and genuine leather upholstery.  No expense has been spared, that’s for sure.

One example is the Chesney’s new electrical system. Not content with a simple AGM battery, there is a 300-watt Enerdrive lithium battery and management system under the dinette seats. And rather than fitting a traditional fuse board, every circuit in the van runs through a marine circuit breaker.

Not everything was smooth sailing, though. “I’d go to bed at night thinking of something, but wake up in the middle of the night, solve the problem and do it the next day,” he says. “If I can offer any advice to others looking to do the same, I’d say it’s a big job, a very big job. You have to do a lot of research before your start.”

Now that he’s finished, Rod’s plan is to just travel as much as he can. He’s already ticked off most of Australia’s major highways travelling in previous vans, so now plans on exploring some of the less travelled routes. He’ll be spending four weeks on the Yorke Peninsula over summer and then he’ll be heading to Tassie for ANZAC day celebrations, meeting up with many of his mates from Vietnam. Just like his first big trip in a Chesney, this’ll certainly be one to remember.

This story originally appeared in issue 29 of ROAM. Subscribe now and never miss an issue.