Paul Jogever shares his experience bringing a 1976 Viscount Supreme back to life, and advice for others thinking of tackling their own renovation rescue.

Where did you find your van and how did you come to buy it?

I owned a mid 1970s 15-foot Millard caravan we used for 12 years of family holidays. They included ski trips to Jindabyne where it was known as “Chateau Millard” and we also took it to the beachfront at South West Rocks. We decided it was time to upgrade. My wife had always wanted a Viscount with the famous curved corner windows. The 1796 23-foot Supreme was advertised on eBay, located 25km inland from Kempsey.

What shape was it in?

It was in fair condition outside, a few dings and dents, faded paint needed a clean and respray. The previous owner has replaced all the important running gear from springs, axles, brakes, wheels, tyres, and the A frame as he was planning on travelling with it. Inside was a stripped floor to timber, no bed, a faulty door, some damaged windows and needing a good clean. Cabinets were in good original condition and no leaks from the roof. The curved corner windows were cloudy and milky from age. 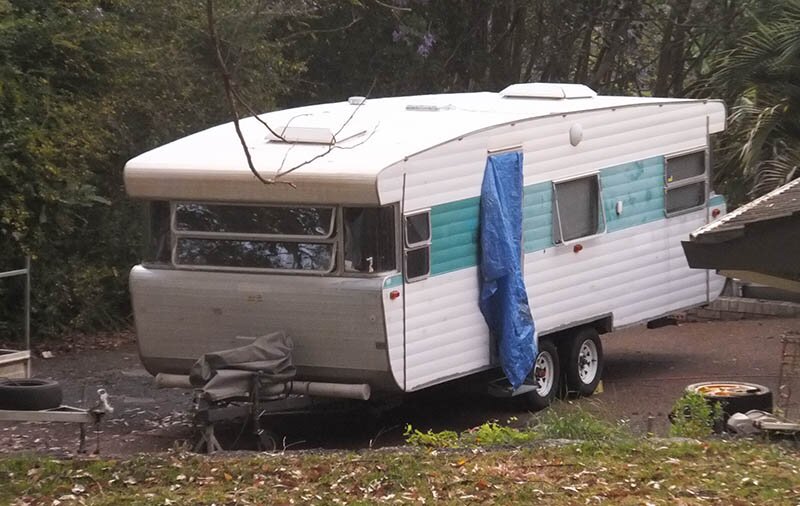 It was once a hire van from Port Macquarie Caravan Hire. When I stripped back the paint on the rear I found a sticker with this on it. The previous owner purchased it from someone in Port and ended up inland from Kempsey.

I started with the floor and installed a floating timber floor. Vinyl would have been easier as there are so many cabinets to cut and fit around, but the result was worth it. Next I purchased a gas lift double bed to increase storage and a good quality mattress as sleep as to be comfortable. We also attached a couple of LED reading lights to the bedhead.

A two speed Camec 12v range hood with two LEDs was ducted through the roof over the existing four-burner gas hob. I have kept the original dome lights but added some LED strip lights at various points. A portable reverse cycle air conditioner has been fitted in the front room and ducted outside through the body. It really helps on those hot days. I found a place to fix a 24” LED TV on an arm. It’s combined with a bluray/DVD/FM tuner for that cinematic surround sound. A stand alone 240v hot water tap gives up to 50 degrees water, enough to wash the dishes. 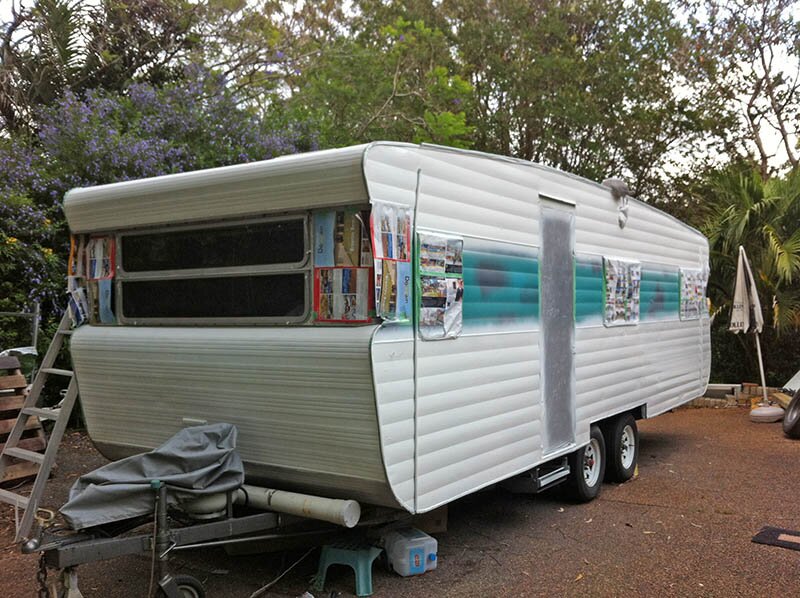 The door was replaced with a second hand “new” door as the original fell off. The curved corner windows were replaced with clear Lexan that is flexible enough to do the curve and slimline venetians were fitted.

The biggest challenge was the painting of the exterior. Firstly I cleaned it well, scoured the old paint with Scotchbrite and filled in dents and holes. I painted the roof with three coast of a great product called Thermoshield. This cuts down the heat dramatically through the roof and also seals any leaks and cracks. I have really noticed the difference in the van, great stuff!

I applied etch primer to any bare aluminium panels and then sprayed the sides of the van with automotive white enamel. The side strip and wheel spats were done in a metallic green enamel that sets off the van nicely. I learned to use a spray gun very quickly and found that it is 80 per cent masking what you don’t want painted and 20 per cent actual painting.

After the paint job a Carefree roll out awning went on, just makes life that little bit easier when setting up camp. The next part of the project is installing four 100w think flexible solar panels, an AGM battery, solar regulator and inverter to be able to enjoy the van away from power. 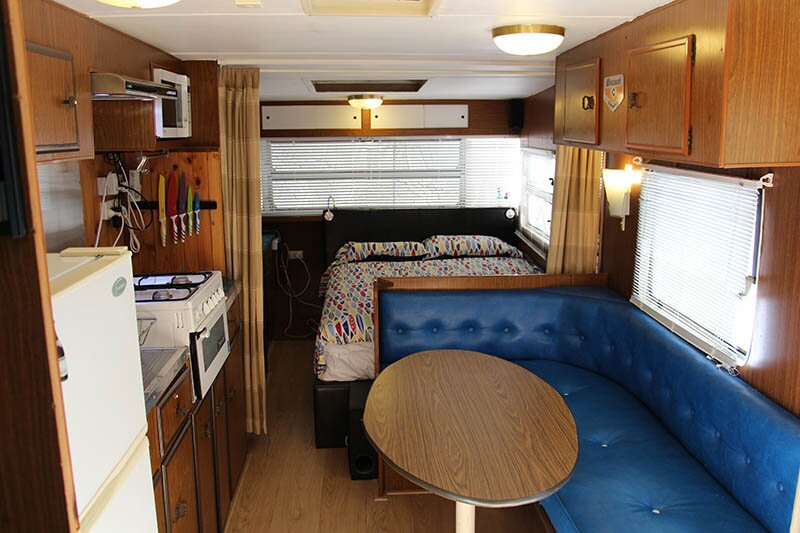 I have really enjoyed bringing the old Viscount back to like. If you’re thinking about it, you should go for it. The more of us doing this and sharing stories and information will keep these classic vans on the road. Ream Roam, join forums and go up to people who have renovated vans as they will be pleased to have a yarn about renovation!

What are your favourite moments?

We use the van for local weekends away near Port Macquarie and annual Christmas holidays at Yamba. We’re joined by cousins who have a Millard from the same era. The best memories are the long dinner table under the stars with family realising you don’t need all the creature comforts of home, just an old Viscount.

Want to have your renovation featured? Email us at [email protected]