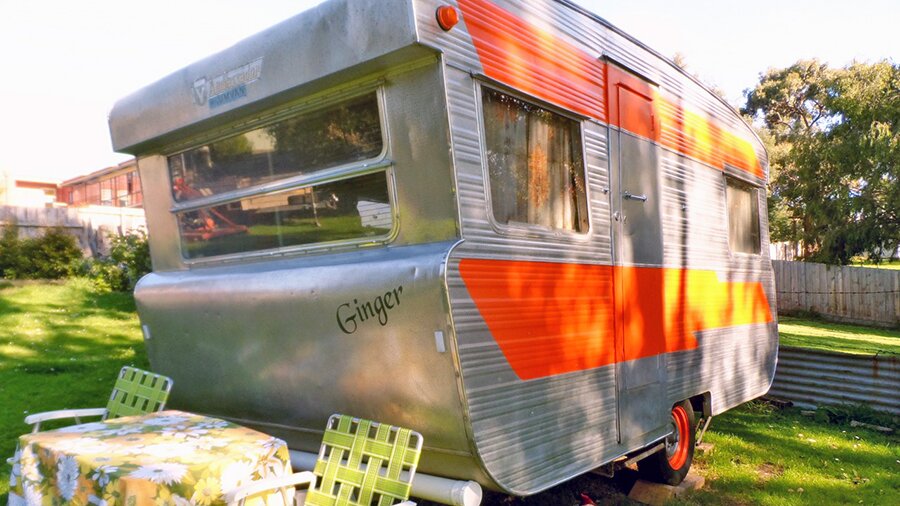 It was an “easy fix” that turned out to be more difficult that initially thought, but with perseverance and a little elbow grease, Lisa Blanco managed to give her classic Viscount Ambassador a new lease on life. Here’s how she achieved it:

Where did you find your van and how did you come to own it?

I’d already restored a 1979 10ft Coronet, which consisted only of an L-shaped kitchen and a double bed. Although it was a great first van, it didn’t have a dinette or a wardrobe, so it wasn’t much good for anything other than quick weekend trips. After a few years I decided that we needed something a little bigger and so I began my search online. I had a very clear vision of what I wanted – a late 60’s/early 70’s 12-14ft Viscount caravan in good original condition with a double bed, white cladding and the distinctive lightening bolt flashes along the sides – yep, I knew exactly what I wanted! I inspected a few but rejected them because they either leaked or they’d been badly made-over and had lost many of their original features (a pet hate of mine).

I had seen a van advertised online in Geelong but dismissed it purely because I didn’t like the bare aluminium exterior and the fat red stripes, which is ridiculous really. So it stayed in the back of my mind and I kept wondering why no-one had bought it. Eventually the price was reduced significantly but as I live over 2.5 hours away I called my brother who lived near by to go and inspect it for me. He said it had some water damage but that it was in good condition and so after a quick phone call to the seller and a little more negotiating the van was mine. I drove to Geelong later that week to pick it up and could’ve cried when I saw it. It was in much worse shape than I expected (thanks Bro) but as I’d already paid a $500 deposit I handed over the balance, hooked it up and drove all the way home to South Gippsland thinking “Bro, what have you got me in to?!” He’s a skilled carpenter so I’m guessing, for him, it was an easy fix! 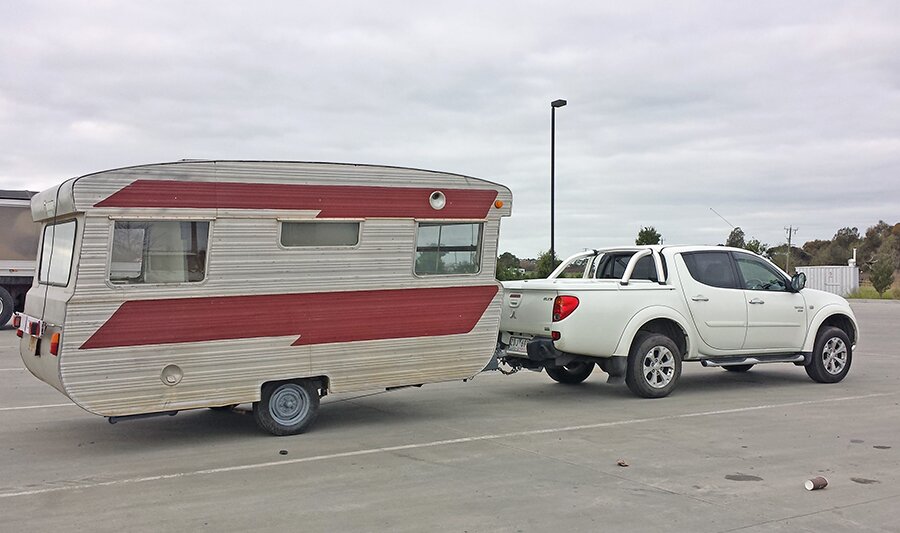 The van was obviously leaking despite being assured by the seller that it didn’t! It had been given a pretty bad paint job inside and out by someone who clearly didn’t know what masking tape was. Some of the window arms were missing, the door had been kicked leaving a big dent in the aluminium skin, the double bed base was basically a piece of ply teetering on some upright timbers, there was water damage to some of the ply lining and inside some of the cupboards, the splash back had been replaced with a piece of the same blue checker plate vinyl that lay on the floor. The good news was that the van had an aluminium frame, the chassis and tyres were good, the cupboard doors & knobs were original and it still had the original ice chest. I knew I could restore the van but it was going to be a big challenge with my limited skills!

Not much unfortunately. The seller told me that it had been brought down from Wagga NSW but couldn’t give me any other information. He owned a box trailer dealership and sold old caravans as a side business. The van was last registered in NSW in 2011 as a 1960 model but I have since worked out from the chassis number that it is a 1965 model. When I had the van re-registered they refused to change the year so it’s still registered as a 1960 model! 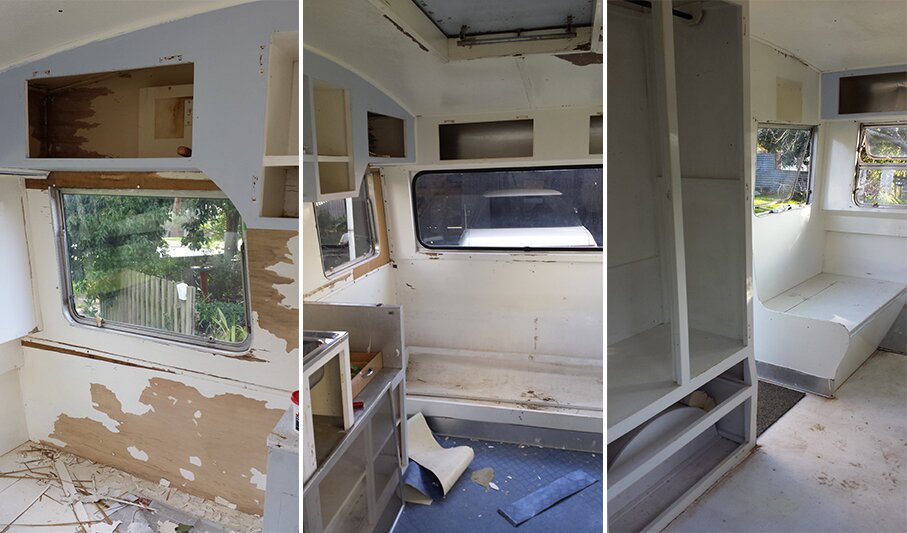 Time was my biggest challenge. I bought the van in mid August 2014 and wanted to take it away for a week in mid September for my birthday. I had a little over three weeks to make the van watertight, road worthy and habitable. I was very fortunate to find a great guy in the next town who restored old cars and repaired caravans. He worked on it for a week to get it ready for registration and to make it watertight. After that, I had roughly two weeks to work my magic on the interior and make it comfy & cosy. It took me a week just to get the interior painted by first stripping and prepping the walls, replacing sections of water damaged ply in the walls and some rotten timber in the roof hatch, then patching, sanding, priming and painting every surface.

After that things got a little easier and I spent the next week sourcing items for the van including kitchenware, foam for the dinette cushions, a custom mattress, sewing curtains & dinette cushion covers, making a more solid bed base and finishing all those fiddly little time consuming jobs that needed to get done. The day before we set off on our inaugural holiday I laid the vinyl floor which was a commercial grade remnant I sourced from a local carpet supplier for $60. Cutting commercial grade vinyl is not easy but there’s nothing like a looming deadline to keep you motivated! 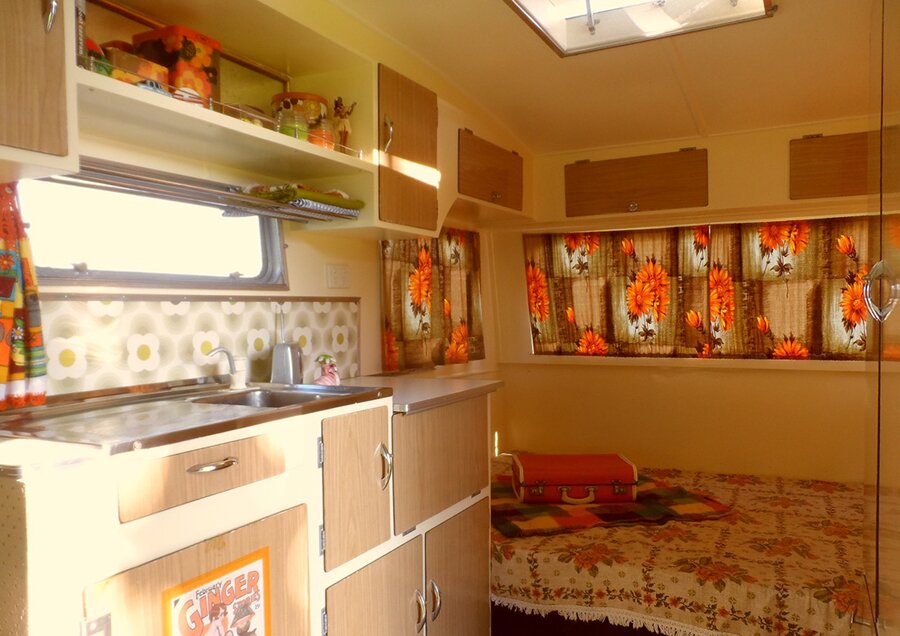 Always inspect a van yourself and inspect thoroughly! A leak is not a deal breaker but at least you’ll know where you stand and can better negotiate on price.

Before I took possession of the van I made sure the tyres, brakes & bearings had been professionally checked so I could safely drive it home. A condition of the sale was that the seller provided a towing permit and a light board, which he happily installed and wired up for me. Before you collect your new van, remember to ask if the van has a round or flat plug so you can arrange an adapter to suit your tow vehicle if need be.

Don’t think that because you are a woman with minimal DIY skills that you can’t renovate a van on your own. Where there’s a will, there’s a way and if you’re not sure then just ask. Of course it does help to have a handy hubby, neighbour or friend to lend a skilled hand when the two hands you have aren’t quite enough!

Laying sheet vinyl is actually quite simple when you know how. Make an accurate template by laying sheets of thick A3 paper on the floor of the van, covering the entire surface including all the little nooks and crannies. Tape the sheets together as you go then lay your cardboard template over your vinyl (on a flat, clean surface) and carefully cut around with a sharp knife. The vinyl will fit perfectly. Commercial grade vinyl needs to warm up in the sun before you cut it. 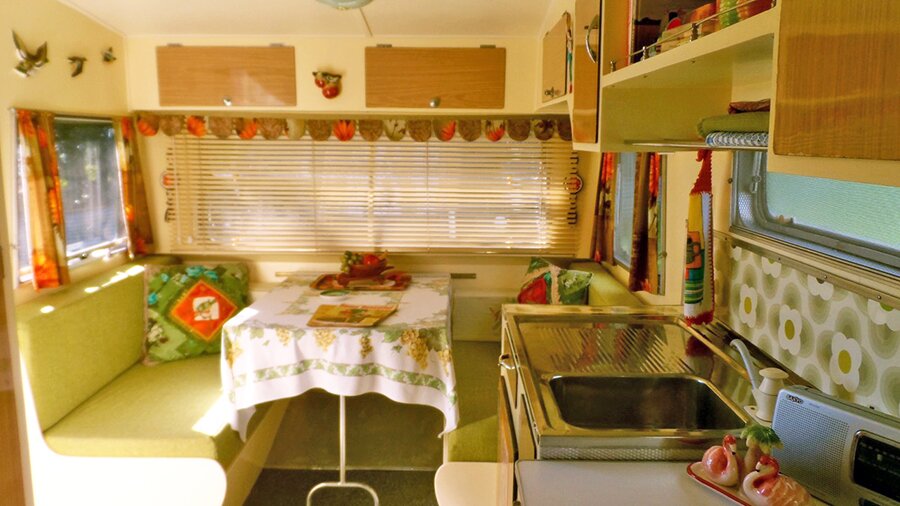 Tell us what you use it for now.

“Ginger” is our cosy cubby house on wheels and we’re always looking for excuses to take her away. We are very fortunate to have some great caravan parks in Gippsland so we don’t have to travel too far to escape for a weekend. I especially love taking her away to vintage van events where I can meet up with others who share my obsession with older vans. Who knew there’d be so many of us out there?! We also get to enjoy Ginger when we’re at home. She’s gets parked in the backyard and overlooks the chook pen and the distant rolling hills. She’s great for guest accommodation and is the best place to take time out, enjoy a quiet cuppa and plan our next escape…

What have been some of your most memorable experiences?

The day I drove to Geelong to collect the van and tow it home on my own through Melbourne’s CBD. Although I had some experience towing and reversing a van, I’d always had my husband nearby as a safety blanket. It was such a personal achievement. Meeting a fabulous bunch of glamping/caravanning women who are just so much fun and so supportive. Many of them are solo travellers who I admire greatly. Finding the original 1960’s barkcloth curtain fabric on Esty. It came all the way from Berlin and was the starting point for the colour palette and retro 60’s theme. The first time we took her away after all that hard work. It was the best reward and we really fell in love with her over that week. Discovering new places and meeting the nicest folks that we wouldn’t have seen or met if we didn’t have the van. 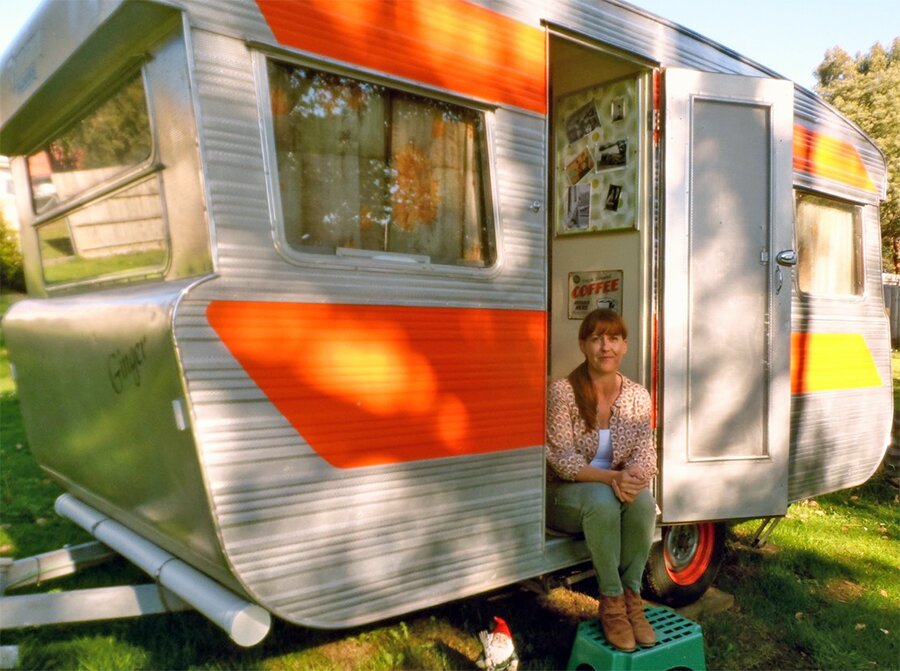 Want to have your renovation featured? Email us at editor@timetoroam.com.au