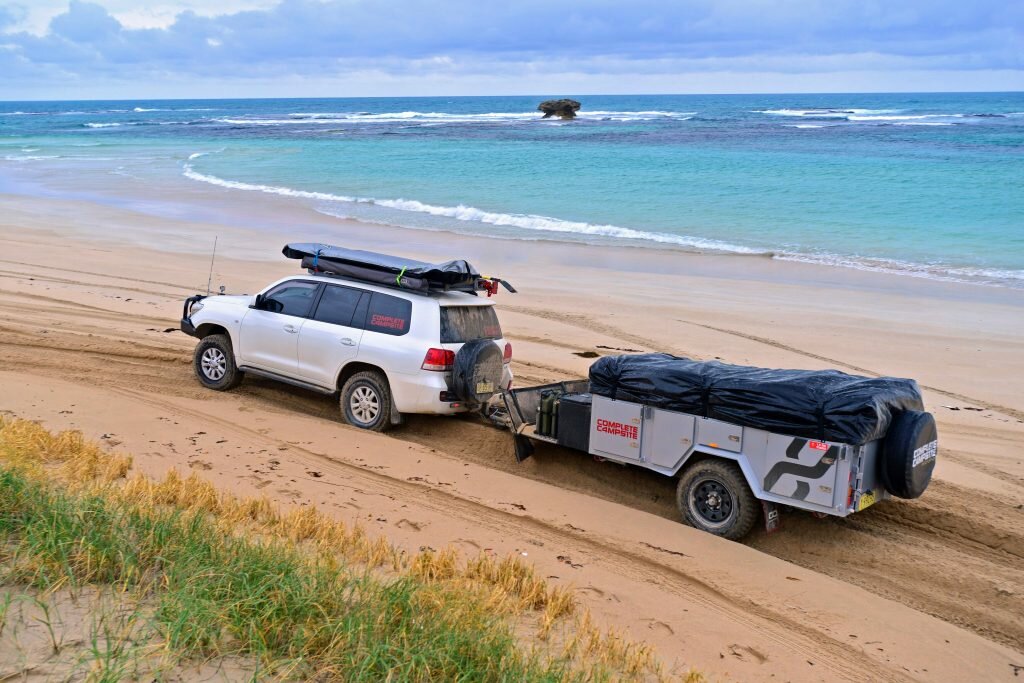 Kakadu in your own backyard

When Grant and Jodie Joyce bought the Complete Campsite business in 2004 it had four employees including themselves.  Within ten years the workforce was up to 40.

While much of the rest of the Australian camper trailer industry was sagging under the onslaught of cut-price Chinese models, Complete Campsite remained firm to the all-Australian theme.  Even when others were at the least buying in components from overseas; kitchens, suspension units, hitches, hinges, the Joyces went out of their way to ensure everything was local.

“About the only items on our campers that might not be made in Australia are the tyres, wheels and cooktops, items over which we really have no control of over origin,” Grant says.

This means Complete Campsite campers aren’t the cheapest out there, but they are among the best, and their policies endear them to a significant section of buyers prepared to pay for quality.

Despite adding new designs, Complete Campsite’s softfloor models are still their best sellers, and ranked among the market leaders.

The Kakadu is the top of the line in the range.  Built on a sturdy Supagal chassis with a capacious 2800 x 1900 x 600mm zincanneal body, it features a lengthy 3800mm drawbar (measured from the centre of the hitch to the axle) to provide a wide range of options around the front of the camper.

The trailer rides on Vehicle Components dual shock absorber trailing arm independent suspension with 12 inch electric brakes.  All wiring and hoses are run inside the chassis, so there’s no risk of jagging something on a stick or being damaged by a rock.  The entire underside is coated in Shutz underbody spray, a coating that will most likely still be there when you’re too old to go camping any more.

There are seven lockable storage bays around the camper, one for the two 4.5kg gas bottles, one for the electrics and the rest available for whatever you may need to carry.
The electrics include two 105Ah AGM batteries, DC-DC charger, 25 amp mains charger, 400 watt wave inverter, battery monitor, 120 watt solar panel, 240 volt inlet and two mains outlets along with plenty of 12V and USB outlets.

The tent is as simple a set-up as we have seen on a camper, simply swinging over with the assistance of gas struts on the main bows, the extension of two spreader bars and the insertion of two uprights.  The base model is 2.8m long by 2.2m wide at the floor, but can be optioned up to 2.8 x 3.2 metres which gives a ton of room to sleep up to six kids in bunks.

Across the rear there’s a 2400mm wide awning, which comes with a half wall to enclose the kitchen area which can be extended with a full wall set.

Inside, the bed is a full inner spring domestic queen sized unit with a canvas bed bag to keep it pristine while travelling. There’s a large dimmable LED strip light in the ceiling and LED reading lights plus large pockets just inside the door and at the bed head.

The Kakadu has a walkway across the foot of the bed so entering and exiting doesn’t require anyone to climb over the top of anyone else, and adds four storage drawers across this area.

The kitchen is all stainless steel, with a huge pantry and the 80L Waeco fridge slides out and swings around on a beautifully engineered system to be perfectly placed for optimal use.  The sink and three-burner stove all go to make this a foodie’s delight.

Water comes from a 95L internal tank, protecting it from damage and excess heat.

The Kakadu, like all Complete Campsite models, isn’t just a big picture success story either.  There are lots of little details making it a winner, like the small LED light near one of the tail lights to illuminate a site for a night set-up, or the clear vinyl covers over all the zips to keep rain from soaking its way through.

All up, the Kakadu is a classy piece of camping gear.  Prices at $48,950 it isn’t cheap, but if you want the best then you know where to find it.

See the complete review and specs in Issue 21 of ROAM