Know the difference between your ATM, GVM and GVM?

There’s not a week that goes by in Australia without one unlucky caravan owner losing control of their rig in a towing accident. In part one of a special two-part feature, TOM OLTHOFF covers the basics of what you need to know before heading off.

Every motorist worth their salt, and even many non-drivers, knows that trailers are terrible things to tow as they wag their tail at the slightest provocation. In actual fact, this perception is entirely wrong. While stories of trailer instability abound, making sure that a trailer behaves itself is actually quite simple.

To the novice caravan or trailer tower, the manner in which a trailer behaves once it is attached to a tow vehicle can create a great deal of needless concern. The majority of trailers, be they a caravan, camper trailer, boat trailer, horse float or box trailer are designed to tow in a stable manner. Problems generally arise when a trailer is loaded incorrectly, the trailer is not compatible with the tow vehicle, the wrong towing equipment is fitted or the driver is not aware of the towing skills required. 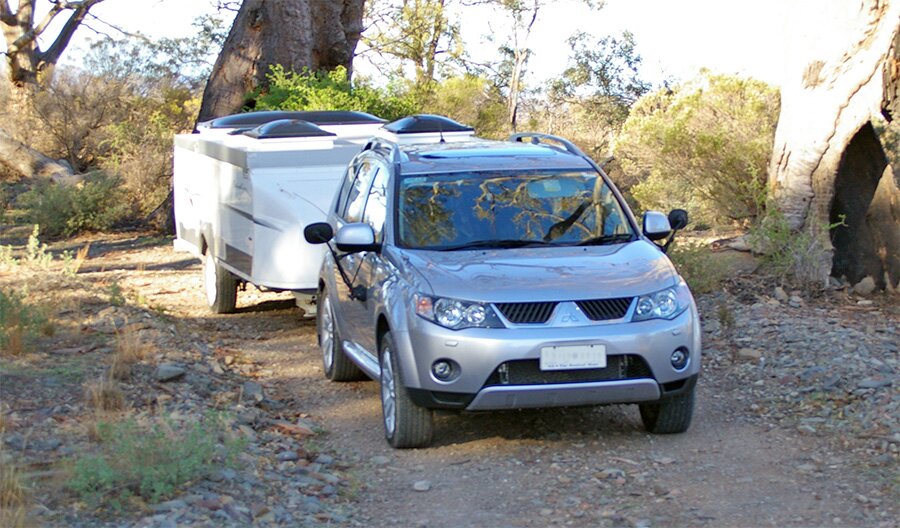 If the factors mentioned above are taken care of, towing a trailer at legally permitted speeds should not be a concern. Obviously the need to achieve good fuel consumption and a consideration for other road users generally dictates that slower speeds are preferable. However, even when 80-90 km/h is deemed a good towing speed, a car/trailer combination should be equally stable at 110km/h. This provides a suitable safety margin.  A trailer towed at 80 km/h because at 85 km/h it wags its tail is an accident waiting to happen.

Apart from having enough weight to control the trailer, the tow vehicle should also have enough power to enable safe passing manoeuvres or ascend a hill at a reasonable pace.

Whenever caravanners get together the subject of weights comes up. While it’s desirable to have some understanding of the maximum permissible weight of the car and van as well as knowing if these have been exceeded, much of the information often displayed is not legally required.

In regard to the tow vehicle, it is important that the Gross Vehicle Mass (GVM) is not exceeded. The GVM is the most the vehicle is allowed to weigh when loaded. Many 4WD wagons have a payload of 500-600kg while utes may be allowed to carry as much as a tonne. It is important to realise however, that the payload (this is the difference between the empty or Tare weight and the GVM) includes everything that is added after it leaves the manufacturer. Not only does this cover the passengers, fuel and luggage but also every accessory fitted.

In regard to trailers, which include caravans and campers, only the maximum allowable weight has to be displayed on the trailer body. This is referred to as the Aggregate Trailer Mass (ATM). Any other information is optional.

When deciding if a particular tow vehicle is suitable for the job, it is critical that the trailer’s ATM does not exceed the car manufacturer’s recommended towing specifications. While technically a caravan having a Tare (empty weight) of 2490kg could be towed by a vehicle with a tow rating of 2500kg, the moment anything is added that causes the van’s weight to exceed 2500kg, the combination is illegal.

Owners should also check what the Gross Combination Mass (GCM) is for their tow vehicle. Most vehicles other than passenger sedans will have a GCM. The GCM is the total of the loaded tow vehicle plus the loaded trailer. Often the GCM may be considerably less than the GVM together with the towing capacity. Where once towing specifications were provided by company engineers, these days many towing specifications are mostly derived by the marketing departments. It pays to always read the small print!

More useful safe towing information can be obtained from: