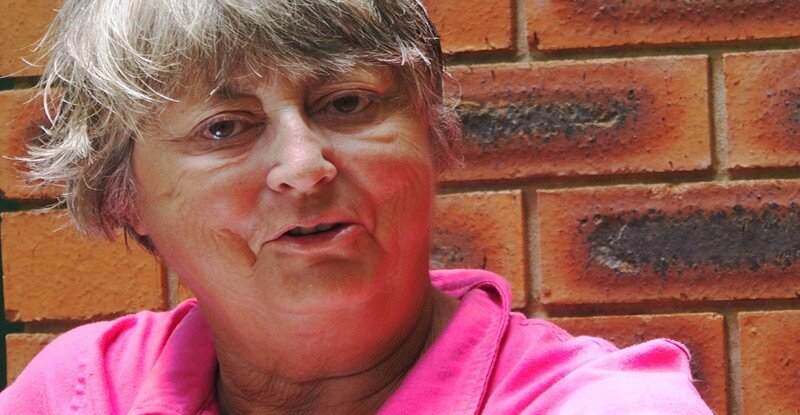 Wildlife rescuer JUNE LE PLA is known as “The Pelican Lady” for her efforts in saving and protecting the big white birds. Here she writes about her love for camping and her most daring rescue.

Camping is a lifetime passion. I can’t think of anything better than sitting under a Coolabah tree in the back of nowhere, where the ground is red and the spinifex glistens in the brilliant sunshine, Snuggling up in my little tent on a cold night and listening to barking owls having a chat, the pungent smell of the Gidyea in flower, or watching the estuarine crocs in the wild -living as they have for thousands of years.

Cassowaries walking on the beach at Etty Bay and the red kangaroo and their magnificent blue flyer females at Riversleigh and the interior deserts are all true survivors of long ago.

Whilst camping trips are all about soaking up this magnificent country, I would never leave an injured animal.

They can fly as high as a jet plane and travel hundreds of kilometres to places like Lake Eyre, and the Wilson River in Queensland when conditions out there are good.

They work as a team in fascinating formations that would make an Olympic synchronised water swimming team envious when rounding up fish, taking turns to feed. Yet they are amazing prehistoric survivors and very tough with a massive pain tolerance.

It is humbling to see the shocking injuries that so many bear, yet they struggle against all odds.

One bird that I attended hit a power line, which completely severed the top beak in half, yet it managed to outsmart me for three months, before I could end its suffering. The bird was barely able to feed itself. Lice were in the shaft of every feather, biting and causing unbelievable pain.

Although devoted to Pelicans my toughest rescue involved a little red marsupial.

It happened in outback Queensland back in 2006. Travelling in our trusty Mazda, my husband Ron and I picked up a friend from Thargomindah Airport and the three of us camped at the Nuccundra pub on our way through to Cooper Creek at Windorah. It was unusually cold with heavy cloud. We broke camp early in the morning and headed out into the Stony Desert, which was a pretty stupid thing to do considering the weather.

We were about 30 kilometres out when I spotted a circle of cattle on the bare stony ground and I knew straight away that some poor creature would be in the middle of that circle.

Ron is used to sudden instructions; stop, back up, turnaround, pull over. To my horror it was a Big Red male joey. He was bleeding substantially and the cattle would certainly have killed him.

I leapt from the vehicle barefooted onto the cold sharp stones, (again very stupid) and separated the cattle. The little guy saw his chance and took off with me in hot pursuit. No sign of a mother dead or alive anywhere.

Eventually I caught him. He was cold, bleeding and coughing with fear and pain. The flash of black and white on his muzzle was so beautiful. Heading back to the truck, the stones got colder and sharper, but I had caught the Joey, so it was worth the pain. I wrapped him in a towel and put him inside my only thick coat, holding him close to me to warm him up. Before long he relaxed and went to sleep.

The weather was now looking increasingly threatening and I thought maybe we should turn back as we were heading into the Diamantina Basin, which is well known for quickly becoming dangerous after a bit of rain. Conditions deteriorated and suddenly we were following the deep tyre ruts of a previous vehicle, probably a ute. The ruts got deeper and then we were in a sea of water as far as one could see.

The vehicle was beginning to slide in the slippery conditions, Troy Cassar-Daley sang happily away on the CD as the water got deeper, with little waves running across the Channel Country. I knew that the worst was yet to come as we approached Monkana Station. Within minutes we were on full lock, broad siding from one side of the road to the other. Not a word from the back seat. I wondered if my friend had fainted from fright and whether I might too as I considered the possibility of meeting a road train or three heading towards us.

The water was now just below the headlights and it was difficult to sit without holding on and I had Red to hold. As we approached Monkana homestead the truck gave an almighty cough, Troy Cassar-Daley kept singing the same track on the disk as it had jammed, and I held my breath waiting to stall and be washed away, but the Mazda was not beaten yet. The broad siding continued, Troy kept singing, and my friend had still not made a sound in the back.

Finally after 40 kilometres of continuous mud and water we pulled over at Whitulania Creek, took a deep breath, as we knew we were now out of it. Time for a strong coffee.

The little joey was still sleeping, the bleeding had stopped and after about nine hours we finally arrived at Bedourie. We called at the Council Office to see if we could find a carer for the orphan and to my delight the librarian was the unofficial wild life carer for that vast area. I was relieved to know he would now be in good hands.

We finally made camp in the dark and observed five road trains fully laden with cattle lined up at the road house ready to head off to Windorah, back along the road that we had just travelled. How lucky can you be? Fortunately there is now a high level road diversion to the south of Monkina station replacing the former low lying road.

In 2012 we travelled the new road through that magnificent country again where there were so many Big Reds. I smiled and wondered whether one was my little guy.

1. Stop trashing our beautiful country with bottles, cans, plastic and other junk.
2. If a bird is hooked or caught by a lure, minimise injury by cutting the line and immediately call a wildlife hotline.
3. Never use braided fishing line.
4. Oppose foreshore high rise developments adjacent to waterways.
5. Keep your distance – over familiarisation with humans results in begging
for food, occasional violence from humans and birth defects from inappropriate food.

Finally out of the mud Joey is taken into care