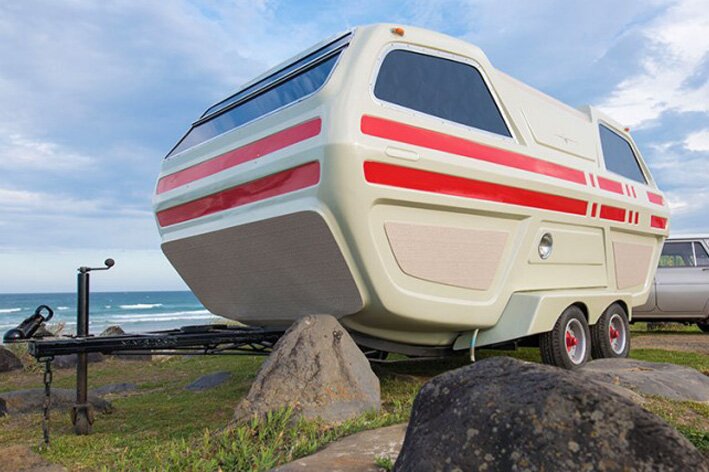 The story of the Murrumba Star Mini – a caravan way ahead of its time.

A year before man landed on the moon this space capsule landed in Caboolture Queensland.

It’s no accident it looks like something from an animated space age TV series of the 1960s like the Thunderbirds or the Jetsons.

Even today it wouldn’t look out of place as a concept vehicle on display at one of the world’s big annual caravan shows.

The Murrumba Star Mini was a caravan ahead of its time and that was its weakness, as well as its claim to fame.   It was too far ahead of time to be a commercial success.   So few were made, they are hot collectors’ items today.

It started out as the dream of an avant-garde designer by the name of Anthony Pusterla.   He shot to fame in the motor industry in the 1960s when he designed stylish hard-top conversions for locally-assembled MG sports cars. His most popular makeover was the MGB Grand Turismo.

Legend has it Pusterla’s designs were so popular, he sold his business called International Styling to take up job offer with Chrysler in Detroit.

Whether or not he made it as far as Motown is hard to say, although it seems unlikely given that in 1968 he was traveling around Australia testing out a light-weight fibreglass camper.

Designed to slide easily on to the back of a ute, he named the prototype the Linda Star after his young daughter.

The polyester fibreglass reinforced plastic was claimed to be “three times as strong as steel at one third of the cost”. It should be noted that this was in the days before consumer laws came in requiring truth in advertising. 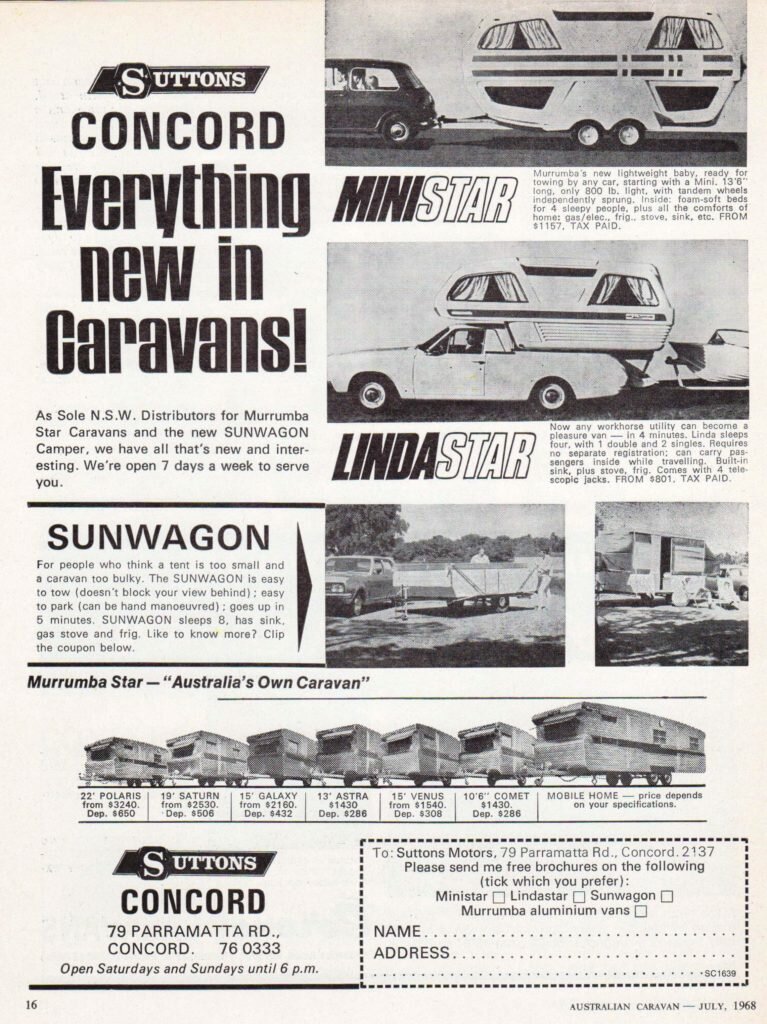 According to its first sales brochure, “The camper weighs only 550lbs yet is made of 35 miles of continuous fibreglass to make outer and inner shells. To achieve strength, there are no right angles in its construction. The Linda Star is 12ft 3ins long, with a width of 6ft 4ins and has a capacity of 350cu. ft.”

Just like a spaceship, the Linda Star boasted an ingenious concealed drop-down lifting system with four telescopic jacks neatly slotting into each corner slot of the van which could be easily raised or lowered with a winding handle.

Pusterla set out from Brisbane on a 10,000-mile test trip to see how the Linda Star stood up under Australian conditions.

He endured tropical rains on the Atherton Tablelands in far north Queensland.

Then in Townsville, he claimed to have deliberately left the holding bolts off to see what would happen when the Linda Star fell off the back of the ute.

According to a report, “he was going up a rise on a deserted road at about 40 miles an hour when the capsule slid off on to the bitumen. It bounced about 15ft and then slid off into the bush, but there was hardly a mark on the exterior. He had fun getting it back, but he did it single-handed when no passing motorist stopped – they just waved to him in good-humoured fashion.”

From there it was down to Sydney to test it in Australia’s worst traffic conditions. 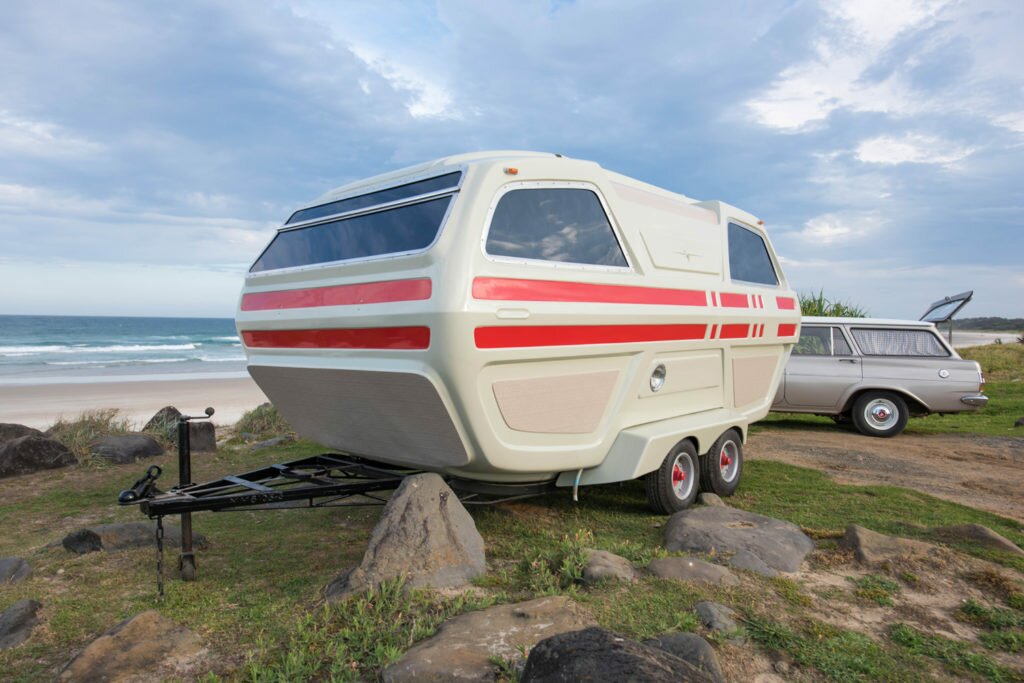 “The construction method showed no signs of deterioration and had no adverse effects on driving or handling of the utility, and no noticeable fall in performance. At speeds up to 60 miles per hour, fuel consumption did not deteriorate to any great extent.”

At one of his Queensland stops Pusterla met up with Ken Duncombe who was the enterprising owner of the Murrumba Star Caravans.

Duncombe was then at the height of his career, building large and stylish aluminium caravans in his factory at Caboolture.

Together they worked on taking the Linda Star to the mass market and also worked on developing a tandem-wheeled caravan version.

It was called the MiniStar to capitalise on the claim it could be towed by the popular Mini car of the era. The 4.1m van with light tubular steel chassis weighed just 362kgs.

Pusterla insisted on further improvements, with the caravan door changing to open in a conventional swing-to manner. The front window was also redesigned to let in fresh air and the overall appearance was improved by the addition of a vinyl grain to the sides, roof and door.

Duncombe promoted the vans extensively through his national dealership, although it’s believed only a small number of either the LindaStar or the MiniStar were ever built.   The relatively high cost and complexity of full fibreglass caravan manufacturing at the time meant they weren’t a great commercial proposition. 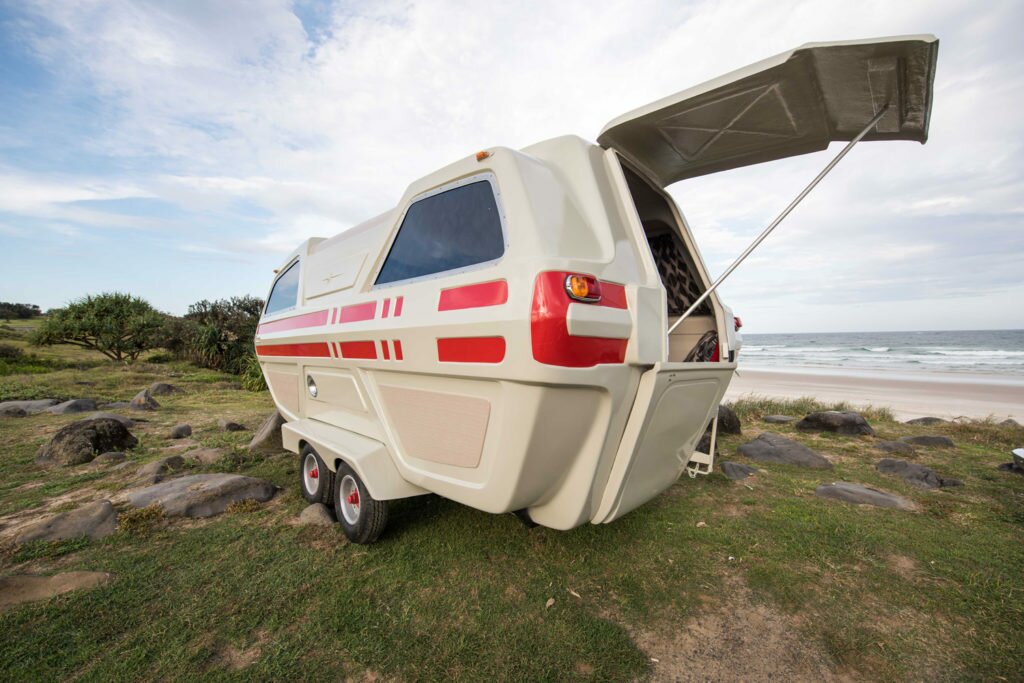 Duncombe eventually sold the Murrumba Star business to Canadian company Glendale and the Caboolture factory went into receivership and closed in the early 1970s.

As for Anthony Pusteria, he remained passionate about the potential for light-weight fiberglass caravans and campers, going on to develop several more prototypes and in partnership with other companies.   At one stage he branched out on his own and established Linda Caravans Pty Ltd, building the Linda Walkabout slide-on camper.

In late 1978, Caravan World magazine reported Tony Pusterla had teamed up with Olympic Caravans to build a large futuristic van called the “Series 2000”.

The records show as late as 1992, Anthony Francis Pusterla took out a patent for a prototype lightweight fiberglass jet ski.

Unfortunately the gifted designer’s passion for for fibreglass caravans and campers was never fully appreciated by the Australian public.   All of the camper production runs were ultimately short lived. Like the Linda and Mini Stars, any surviving Pusterla fibreglass creations are extremely rare and increasingly valuable collector’s items today.