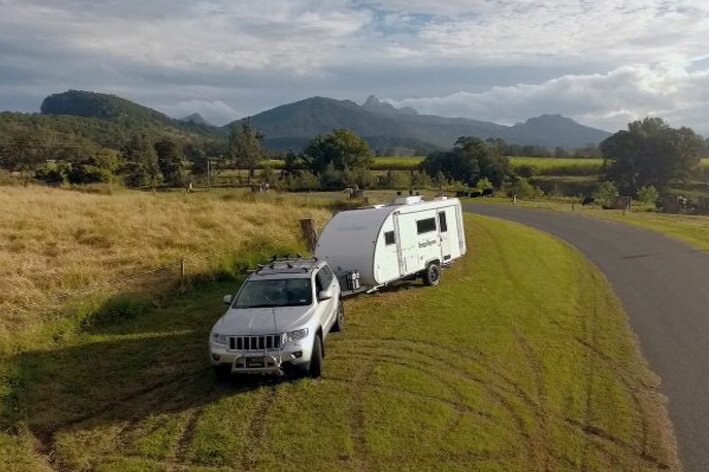 It’s all about the bathroom

Of all the caravans we’ve reviewed, Sportscsruiser has always been among our favourites.  Not only is a sleek looking van, there’s a great story behind it.

Sunshine Coast semi-retirees John and Wendy Smallwood invested everything that had on building their dream.

When the couple reached nomad age, they looked around for a caravan and decided they could build something much better suited to their needs themselves.

They wanted to use some of the quality products they’d come across in the recreational boating industry.  It makes a lot of sense given boats and RVs share a common need to be solid, compact, comfortable and watertight.

Many of these boating principles have gone into the design of Sportscruiser.  Most importantly, the outer shell is like the outside of a yacht – tough and hail proof.

As time went by they found their buyers asking for a full-sized bathroom.

So the Sportscruiser was upsized by 80cm and a very generous ensuite added to the second 1800 model.

It has a decent sized shower, stylish china bench top basin, a toilet with room to move around and plenty of storage.  A washing machine sliding out from under the vanity is a $1100 option.

Like the original, the new Sportscruiser 1800 is comfortable, with the interior more sleek and minimalist rather than trying to be over-the-top luxurious in style.

John’s attention to detail shines through is many of the smaller features.  In the ensuite, he’s used an opaque plastic material for a snugly fitting sliding door/privacy screen.  Much better than some of the flimsy vinyl jobs seen on others. 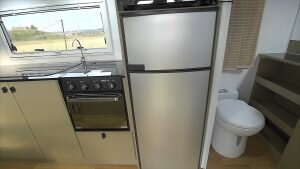 Stepping inside, all the vital electrical switches and gauges are immediately on your left near the door so you can attend to what you need to without even getting into the van – most important when it comes to the adjustable suspension.  Next to that is a comfy lounge and island bench.  Its mechanism means it can be moved around easily to suit your needs – its another “steal” from the boating industry.  So is the very effective kitchen exhaust van above the stove and oven.  The kitchen area is galley style with adequate storage.  There are lids above the sink and stove to give you extra food prep area and also keeping it neat when you’re not using it.  The test model came with a 170l two door fridge and there’s a microwave above it.  The cabinet fittings are all made of an expanded PVC material, tough, waterproof and lightweight.

Up front under the sloping down padded roof there’s a choice of two single beds or a queen.  The large three-way European windows make it feel light and spacious during the day and there are well-placed LED lights for night.

A large LCD TV is well sited just to the end of the kitchen bench where it can be swiveled around to suit night and day.

There are more advanced features outside.  Asked why there’s no copperplate on this off-roader, John says he’s sourced a new stone resistant film, the same as is used on the blades of helicopters.  It’s as tough as metal, but much lighter.

Underneath the Cross country van there’s added protection for water tanks and other potential exposed mechanics from thick rubber shields.  Overall it’s pretty tidy on the underside anyway, with not too much exposed.

Since we last reviewed Sportscruiser John says more than 500 changes have been made to the original 1600 design.  “Most of the ideas have come from customers.  I always think if they have a good idea, why not incorporate it?”

The top of the range Cross Country as reviewed retails for $72,000.  Upgrades include most add-ons you need to go off grid including a triple filtered drinking system, upgraded energy management, inverter, multiple batteries and solar panel.

It also sports an articulated tow hitch and a premium Cruisemaster airbag suspension system giving the smoothest ride possible and allowing you to adjust the floor level on a sloping site at the press of a button.

There’s space for two spare tyres, one under the front chassis and the other neatly fitted to the rear.

The Cross Country weighs in at around the two tonne mark unladen– a lot of that weight is in the chassis – all Australian steel and double the thickness and weight of most other caravans.

Sportscruiser continues to be one of Australia’s best compact caravans. Really its brilliance is its strength and simplicity.  It’s tough enough if you want something more bush-worthy with a lot more comforts than you’d have in a camper trailer.

It’s comfortable, easy to handle and a good price for a no fuss caravan.

For the full review and key specs, see Issue 22 of ROAM