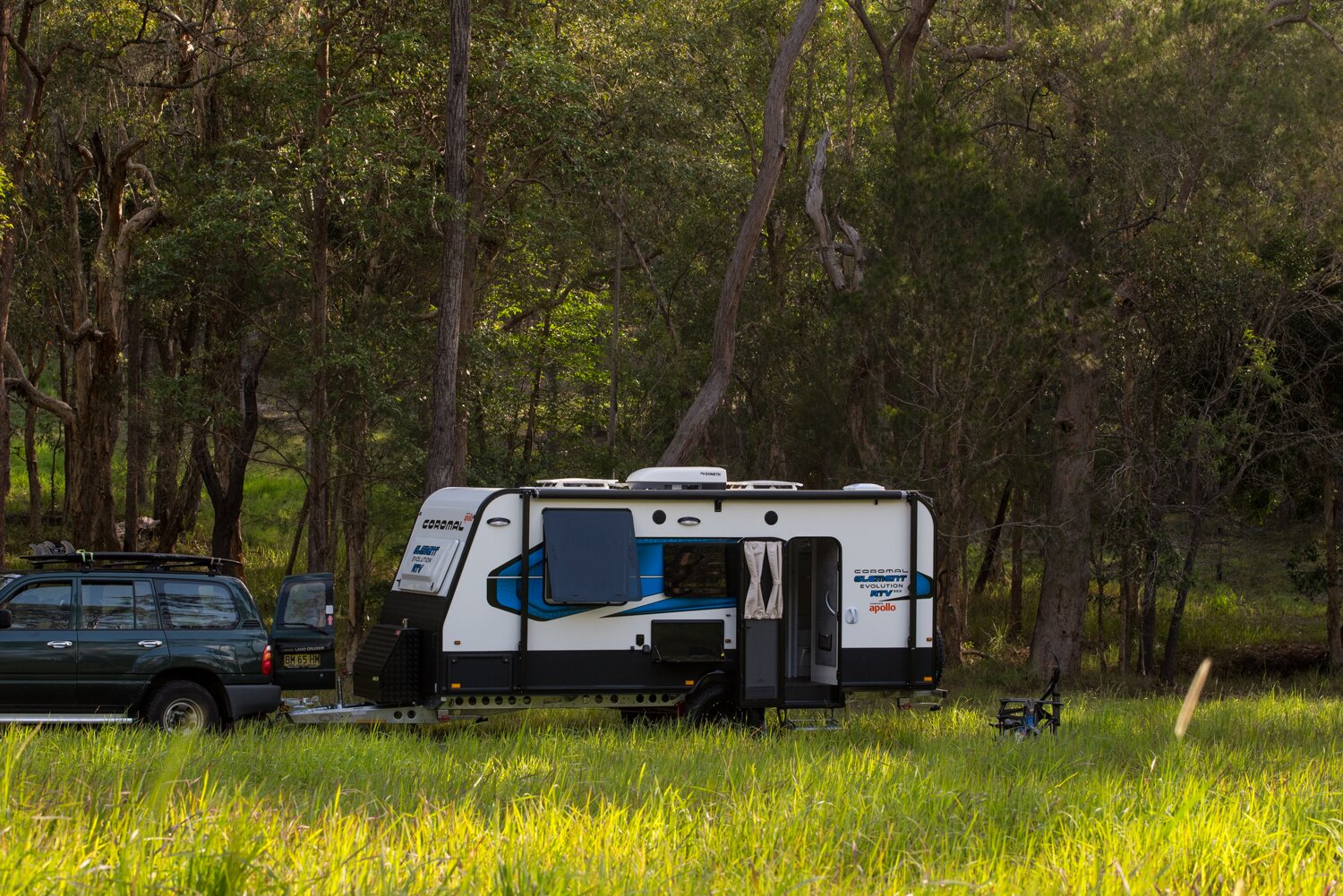 After years of being the bane of shareholders in Western Australia, Coromal is now finally in the hands of another ASX listed company, this time on the east coast. It was picked up for a pretty penny by Apollo in June last year, along with stablemate Windsor, and for the first time ever, east coast-built Coromals have been rolling off the production line. So, what’s a Queensland Coromal Element Evolution RTV like? Any different?

Since the initial acquisition, Apollo’s been busy rearranging its new factory to fit another production line, has bought up over 10-million dollars’ worth of materials, machinery and stock from Western Australia, and then evaluated what it will and won’t continue with. The aluminium clad vans are out, for instance, and Apollo will only continue with the smooth-walled, composite constructed Evolution vans in the Coromal line-up, and them with only a few changes, it turns out. Simon Kerr, Coromal’s brand manager told me, “The Apollo manufacturing team have done some tweaking, looking at ways to improve an already excellent product. When Fleetwood launched the new Evolution build in May 2018, after two years of R & D, they solved a number of issues that are prevalent in a number of framed vans. The new construction method made for a more robust van, with a significantly reduced chance of water ingress. It also produced a lighter van, which in today’s market is vital.”

One of the best things about the new Coromal Element Evolution RTV is the FRV Modular Assembled Evolution Chassis, which instead of being made from box section steel, is a pressed metal chassis riveted together in the same manner planes are. It’s carefully engineered to be lighter and stronger than the more traditional Coromal chassis (up to 125kg in some cases), but because it’s modular, is simple to build with less chance of human error (like poor welds, because there aren’t any). Expect chassis like these to be the norm in the future, as AL-KO has only just launched its own version of the concept and even Jayco’s forward-folding camper trailer’s chassis has some similarities – as if Jayco is testing the water. Coromal was first, though.

The body is a modern composite panel construction that’s also light and strong. Called Future Tek by Coromal, it’s a timber-less system that’s held together by a clever extrusion system. All the windows are glass, too, which is a hark back to vans of old. These are double glazed, hoppers, though with a really sturdy latching system. Although they’re a little heavier than plastic windows, they’re better insulators and don’t get scratched by passing tree branches and things like that.

And the vans are light, although Coromal’s are a typically light van (the framed, clad Elements were also quite light, even without the fancy chassis), the RTV is notable amongst its peers. The van’s ATM of 2400kg is 120kg heavier than the Jayco Journey Outback 18.55-3 at tare. Side by side, the Coromal is nearly 300kg lighter! It’s only 500kg heavier than our new Viscount, and that’s an on-road van built in the 70s that doesn’t have any modern comforts fitted.

As expected, the RTV rides on Coromal’s wishbone, leaf-sprung independent suspension, although in this case, the sports version, which is painted red and adds an extra leaf spring to handle dirt roads and outback highways of reasonable quality. I really liked how this van towed. The last Fleetwood-built Coromal I towed had the taller, off-road coil springs under it and that rocked around and swayed a little, but this one is rock-solid. The brakes were a little light-on, though. I had the brake controller set to almost full to get reasonable force from them, whereas the van I towed immediately prior was only dialled to about half-way. But because it’s light, it’s so much less of a burden on the car, and just about any large SUV, even older Prado’s and HiLuxes will be able to tow it easily.

At camp the Element is everything it needs to be. Continuing the modern look and design of the chassis and exterior, the van is light and bright, with demure colours, where colours are used. The kitchen and dinette dominate the main space and is set out to be easy to use with heaps of storage. Although as it’s only an 18-footer, the kitchen isn’t large. Tucked into the space is a four-burner stove and grill next to a large stainless-steel sink with drying space. I really like that Coromal’s using an instant gas hot-water system in the van, because it means you’re only heating water when you need it – if you only need to fill the sink for dishes there’s no need to heat 14-litres of water, after all. The controls are under the counter in the ensuite and you can dial in the exact water temperature you need. The kitchen also has a 190-litre three-way AES fridge on a raised platform so it’s at an easier to get-too height. Above that is the 25-litre microwave. The benchtop is made from the same stuff as the walls, although laminated in this case.

The dinette was soft and comfortable – I enjoyed my time at it writing up the tow-test article from this issue. The L-shaped lounge is easy to get in and out of and the table is adjustable up and down and round and round. The cushioning was fairly soft, though, and I could already see it compressing where I’d been sitting, so something a bit firmer might be longer-lasting.

At the back, the ensuite is nice and simple – there’s a wide counter top with a ceramic basin over it, and a Dometic electric flush toilet. The storage is basic, but there’s plenty of it, both overhead and under-bench. The shower cubicle is generous, too, so most people should be able to move around inside quite easily. The ensuite’s dividing wall, as well as the panels between the bedroom and kitchen area, also act as bulkheads to stiffen and strengthen the van’s body.

The van’s short length is most obvious around the bed, though. Even without the bed extended to its full length I had to squeeze around the end through the small gap between it and the dinette, and on the other side, past the television. It’s the price we pay for trying to fit a bathroom in a 5×2.5m house, after all. Once you’re on it, though, the bed is quite comfortable, and the storage under and around it is good. The base lifts up to get into it, and there’s also two drawers at the foot for easier access to regular items. The robes either side have large pigeon holes with 240- and 12-volt points inside. There’s also a front window with travel cover, offering a bit more light into the area if you need it. Although the van has an air conditioner, the bedroom could do with a couple of little fans, though – it got pretty stuffy in there, camped without power, as we were.

Outside, the Coromal looks the part, but also has some handy features. The roll-out awning’s great, but I really love the picnic table that doesn’t need a key to open it (why do they need keys – there’s nothing behind them?), and the tunnel boot. The RTV also has 150W of solar on the roof, rather than the 100W the standard on-roaders get. Don’t forget the spoiler. Coromal says it provides stability. Whether it really does anything is anyone’s guess.

At $65,000 this is a very well-priced van. The 18-foot Jayco Journey Outback is only $5000 cheaper, but you have to lug around more weight and a less modern product. The Coromal is at the top of the production-caravan game – it’s a comfortable, well featured van that should last a long time. Certainly worth a closer look if you want a modern, light semi-off-roader.