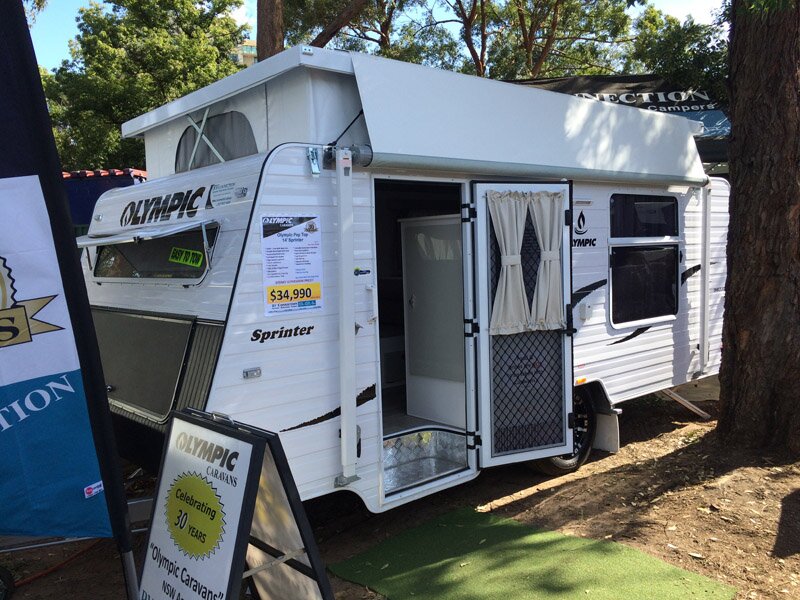 The Little Olympic That’s A Blast From The Past

If you’re planning on visiting the Rosehill Supershow this week, you’ll very likely be overwhelmed by large, fancy caravans that are heavy and have all the bells and whistles. They also have the price-tag to go with it. But tucked away in a back corner, on the Olympic stand are two little vans that hark back to when caravanning was a simple pursuit. The Sprinters.

Measuring just 13 and 14 foot in length, both vans are less than $35,000 and for all intents and purposes, are very comfortable for a couple who want to travel easily. I had a really good look through the 14-foot model, because of all the fancy new caravans on show, this one stood out for its simplicity. (We’re going to be taking the 13-foot, rear door version away for a couple of days to review, so subscribe to ROAM here to see what we think).

With a tare weight of just 1155kg and ATM of 1500kg, it’s a super-light caravan that can be towed by just about any car or medium SUV. And because it’s so small, it’s not going to be a burden on the road. On the road is the only place it will go, although I was told a full-off-road version has been ordered by a customer!

You can get it in single or double bed layout and it comes with an innerspring mattress, wardrobes and a cute little cafe dinette. The kitchens along the front wall, with the dinette butted up against it, although the kitchen bench does lift up to reveal a large pantry space. It probably doesn’t need an oven, but even with it, there’s not a shortage of space.

There’s very few mod-cons fitted, which is part of the charm. No ensuite, no hot-water (doesn’t need it if there’s no shower, after all). Best of all, it’s still got wind-out windows with fixed flyscreens, so you can open the windows and bugs won’t fly in while you’re fitting the screen in place.

Like the days of old, the battery and awning are addons, although this is clearly a van for caravan parks and show-grounds with powered sites, so that’s only a small issue. It can carry 60-litres of water (plenty, because there’s no shower or toilet), and has a 90-litre fridge.

If you only need a simple travel companion, this is a pretty good option from a brand that’s been around in its modern iteration since the 1980s. You can see it at the show, or get in touch with RV Connection. It’s on display for $34,990, drive away.

Thinking of buying a caravan or camper? Subscribe to ROAM so you don’t miss any of our in-depth road and camp tests.