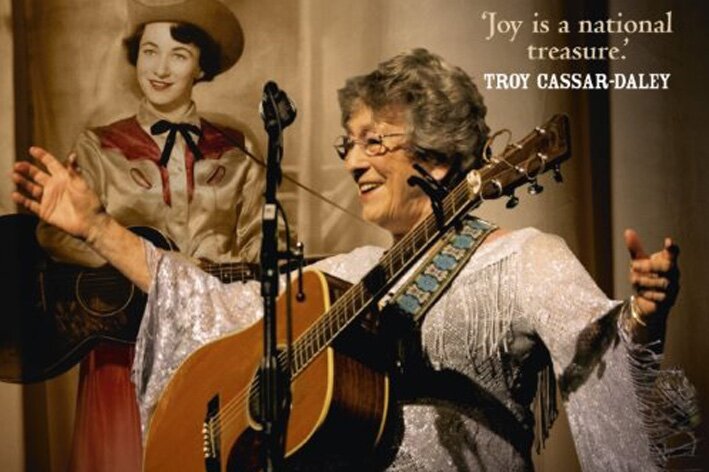 Joy McKean is perhaps best known as the life-long partner of Australian music legend Slim Dusty, although she was already a successful and established entertainer even before they met. In the early 1950s when radio was king and dominated by male presenters, Joy and her younger singing sister Heather (pictured) hosted a prime time show of their own on Sydney station 2KY. The pair were Australia’s most famous yodellers. The McKean Sisters show had a massive audience in the days when so-called “clear channels” were listened to at night by people in remote places, even as far as New Zealand.

The daughter of a country schoolteacher, Joy says she’s been on the move her whole life. When she met and married Slim Dusty, they went on the road performing around Australia and for 17 years called a caravan home. Joy performed with Slim, managed the band of entertainers who were part of the show and gave birth to daughter Anne and son David along the way. She’s never stopped travelling, only recently taking her Trakka Jabiru motorhome to the Northern Territory to catch up with an old friend in a remote Aboriginal settlement. The author of three books took time out from a recent book signing tour to speak to Time to Roam.

Tell us about the first time you met Slim. Was there something special there right from when you met?

People always ask if it was love at first sight, but it definitely wasn’t. Slim thought I was just a city girl and I thought he was bit up himself. But we soon found out both of us were wrong. It was song writing that brought us together. Did you go for caravanning or camping holidays when you were young?

The first time I ever got into a caravan was when Slim and I got into a home-made caravan. We’d been married three years and we went out on the road. I’d never been caravanning or camping before that. It was an old homemade van made of Masonite. It was really heavy and not much worked in that caravan but it was comfortable and we had a bunk for our toddler daughter Anne. We lived in it for 12-18 months.

As we travelled I started to see all these nice vans so I began agitating for a better one. After the Masonite one came a Silver Arrow at the end of 1955. It was a beautifully finished van inside and out.That one we travelled in for about three years then Keith Orford built us one. Keith used to build vans exclusively for Showground people – the people who did the agricultural shows and lived in caravans year round. We worked for six years on the showgrounds with a big tent show. The Orford is the last touring caravan we owned and will be on show in the Slim Dusty Museum at Kempsey.

The last van Slim and I had together Jayco built for us. It was a Jayco Dove, a 15 footer with a shower and toilet. Now I drive a little Trakka Jabiru conversion motorhome with a Merc sprinter chassis. I got that in 2005 and it’s been very good. We enjoyed caravanning because when you are touring you arein your own home instead of living out of a suitcase.

Looking back, what are your best memories of your travels?

We lived in caravans for 17 years and for many years it was a travelling community with other performers. They were good times. With the caravan you had your home life, you took it with you.

Some of the places we went to were very isolated. Aboriginal communities in the Northern Territory, or out in the Gulf country.When were travelling in isolated areas we travelled in convoys. In our convoys the rule was that you had to check your mirrors regularly for the person behind you. You had to be able to sight them every now and again. If you didn’t sight them for a few minutes you had to pull up. After 20 minutes you had to unhook and turn around and go back. That way nobody could be caught without water or supplies. You had to have that sort of safeguard.
It must have been challenging for you as a young mum It was a task I grew into, because I started young and grew into it. We were out there doing what we wanted to do, we were our own bosses and we were able to sing and write our songs and travel.

That was a very big thing for us.

What was your favourite place visited in your travels and why?

With caravans and bad roads, if they are corrugated, you either have to crawl or get up to a speed where you get over the corrugations and it can be dangerous. We were a bit lucky one time. We were on a dirt road out Goondiwindi way and we had a couple of the girls from the show and wewere pulling their caravan. We were coming towards a grid and we could see a road train coming towards us so Slim pulled over to let the road train come through. Of course there was a great pall of dust. Slim began to pull back on to the road to go through the grid and next thing another road train pulls out – he was travelling in his mate’s dust, which is something you should never do. When Slim threw the wheel to get us off the road it threw the caravan into the path of the semi and it went through the side of the van. Lucky it was a wooden van and not metal framed as it took the caravan right off its chassis. If it had been a metal one we would have been dragged under the wheels. The driver ended up on the side of the road with girl’s dancer costumes all over his windscreen and all their belongings scattered all over the road. He got told off by the girls to start with and then by us. You should never travel in your mate’s dust.