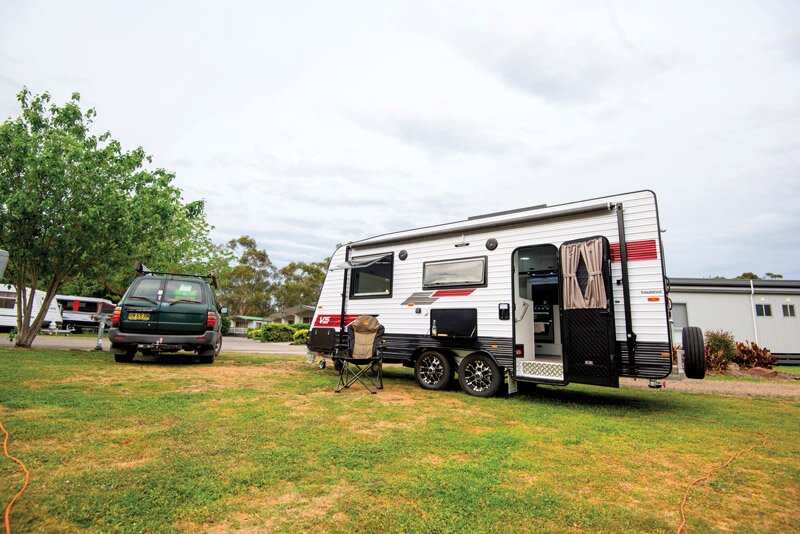 If you knew next-to-nothing about caravans, there’s a good chance the ‘next-to’ would be the name Viscount. At one time it was a powerhouse in Australian manufacturing, producing seven out of every 10 caravans on the market. It even owned the second most well-known brand in the country – Millard, at one point. Although all dynasties must come to an end and Viscount, from its lofty heights of the early 1980s, never recovered after a few bad decisions. Still, the name was in use well into the 2000s until the then-owner was barred by ASIC from owning a company. After that the name was aquired by a third-party when the trademark lapsed, and it was sat on for years. Until this year, actually, when Concept Caravans bought it and resurrected one of the greatest names in Aussie caravanning (apart from ROAM, of course).

So, here I am, in one of the first Viscounts to roll of its new production line, to find out two things – is it anything like the Viscounts of old, and more importantly, is it any good?

I’m in the V2, a 19-and-a-half foot, dual-axle van for two people. It weighs 2118kg at tare and can handle another 400kg of stuff, which, if you can sacrifice 18kg of load capacity, makes it ‘old’ Prado-friendly. It rides atop load-levelling leaf springs and has a reasonably light ball-weight of 101kg, which gives it plenty of room to be loaded up forward of the axle.

There are three Vs to the new Viscount range, largely separated by length and chassis dimentions. The V1 is just 5.5-metres on a single axle with a 4in chassis, while the V3s are six-and-a-half meters long on a six-inch frame. The only aberration in the line-up is the V2 family version, which is the longest of the lot, but sat on the 4inch chassis.

The V2 is purely an on-road van, though. If you want to head off-road (well, gravel roads), the V3, with more ground-clearance, larger tyres and the sturdier chassis, is what’s recommended. On road, though, the V2 tows great. With both water tanks full (they’re forward of the axle) and some gear in the forward tunnel boot, the ball weight increases enough to steady it. My old LandCruiser’s not that willing to get a van this big to 100km/h, but when it did (mostly down hills), it tracked very comfortably.

At camp, the Viscount offers everything you need and more than I was expecting, really. The rear-ensuite, café-lounge layout works well and I needn’t waste too much space telling you where everything is. Considering the brand’s motto is ‘the affordable lifestyle,’ there’s a significant amount of high-quality features inside.

The kitchen, for example, features a Thetford Caprice MkIII four-burner stove, grill and oven. The fridge is Thetford’s new slimline N3141 (3 = three-way and 141 its capacity in litres) fridge. There’s also a range hood and microwave, filtered water and LED lighting, which is over and above in an ‘affordable’ van’s kitchen. It’s quite a long-affair, too. The slimmer fridge (about half the width of a traditional one), means more bench-space further down. The fridge itself is quite good, too. Double doored, I was expecting the freezer to be at the bottom, but that’s actually a pull-out drawer for tall bottles and the like (they won’t fit in the door trays), while the freezer is up top. It’s also tropical rated, so should be fine up north if you stay longer than you should.

One thing the kitchen (nay, the van) is missing, is shelves. There’s not a single shelf in any of the cabinets anywhere in the van. While all of the cabinetry looks great and is excellently presented, opening any of the doors reveals quite large, open spaces that would be a nightmare to organise. And I find it hard to believe it’s an acceptable cost-saving exercise – the van has its own washing machine. You can’t tell me people would rather the occasional convenience of being able to wash six tea-towels and a pair of nickers (about all that’ll fit in a 2.5kg ‘mini automatic washing machine’) over the everyday convenience being able to organise their stuff. And surely in a CNC machined cabinetry shop, shelves for eight cabinets would cost less than a ceramic, counter top basin with a stainless steel, designer tap.

Saying that, the ensuite is nice. It’s got a 2.5kg ‘mini automatic washing machine’ and ceramic, counter top basin with a stainless steel, designer tap… The shower area is quite generous and there’s actually one of the van’s two shelves by the cassette toilet (the other’s under the dinette table). Lighting in there is great and there’s plenty of storage, both over and under the counter. There’s also two roof hatches with extraction fans.

The dinette is comfortable for two, although as it’s over the wheel arch, there’s not room for four at it. Conveniently, there’s a tri-fold table, reading lights over both seats and a power-point with USB charging outlets right at hand. I’ve been sitting in it for hours writing this review so can vouch for its comfort.

To the front, the island bed is six-feet, five-inches long, once you’ve added the extension. It’s got an innerspring mattress which is of medium softness. I slept quite well on it. The base lifts up and underneath you’ll find the 100ah battery and 25amp charger. Around the bed head is the stock-standard hanging robes, overhead cabinets and narrow drawers. Both sides also have cubby holes which have a power point in them and reading lights for him and her. As is pretty common on 19-foot vans, there’s not a lot of room around the bed. To get to either side you have to squeeze past the dinette or kitchen by doing an awkward sideways waddle.

There are other comforts on board, too. In the roof is a Gree (I’ve never heard of them, either), 3500W reverse cycle air conditioner; a 24in telly sticks to the wall at the end of the kitchen and there’s a stereo with internal and external speakers.

Which is a longwinded way of answering question two – is it any good? Yep, the new Viscount is pretty good. The van is well made, tows fine, is reasonably comfortable and well-priced. It’s a good caravan.

The answer to question one is a little harder, though – is it anything like the old Viscounts? There are certainly some similarities. The Viscounts of old (and I’m talking up until the Ultralite (but not including the Aerolite) were simple, inexpensive caravans for the everyman. This new one is, maybe, a little more-fancy than what the everyman needs, but it comes pretty close. Like the old Viscounts, the range is also very simple – there are basically four vans to choose from and if you don’t like them, buy something else. I like that.

It’s not aluminium framed, though, which was a hallmark of the old Viscounts, and that’s something that would improve this van. Timber framing, while serviceable, is an old way of building vans and has too much potential for trouble, down the track. It also doesn’t have a yellow and green stripe down the side, which is probably the biggest disappointment, for me. Those stripes are iconic.

All that said, I fall back on my answer to question two. Name and heritage aside, this is a nice caravan that’ll treat a traveller well. There could definitely be some work done prioritising features (shelves before washing machines), but otherwise it’s backed by a company with a great reputation and sold at a great price. Hard to argue with that.