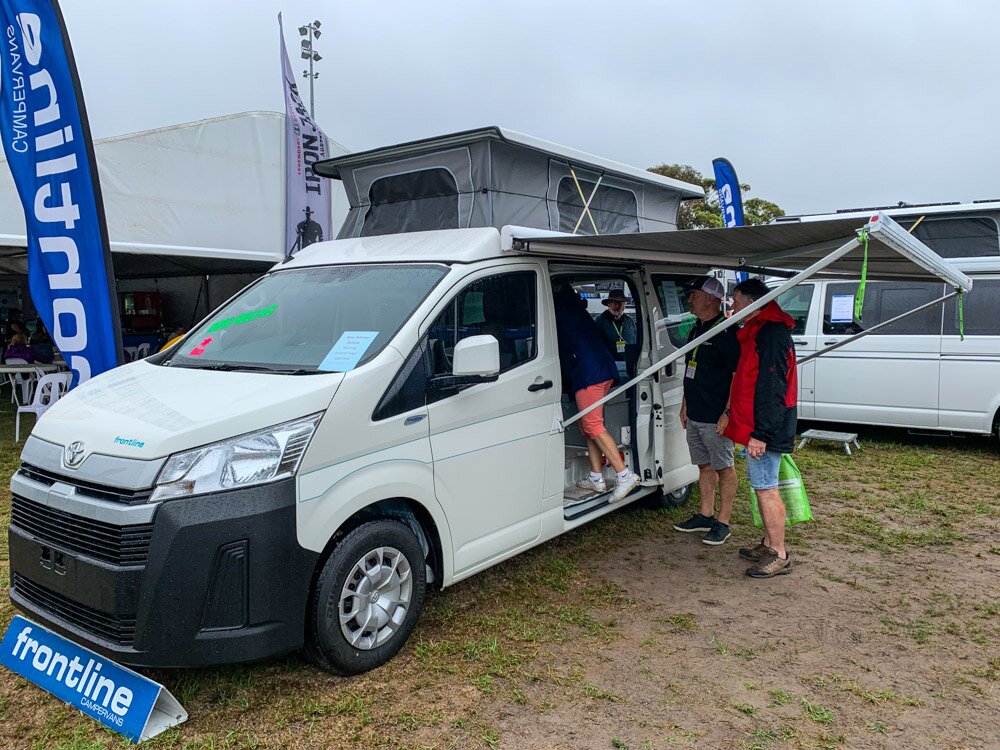 On a weekend of record rains, the brand new HiAce-based campervan from Frontline Camper was on display at the Newcastle Caravan Camping Lifestyle Expo. The previous model HiAce was in service for nearly 15 years, so to say the update is overdue is an understatement. We got a chance to look over the first model off the production line, and chat with Frontline frontman Peter Farrugia about its particulars.

On why they were so keen to get a new HiAce camper to market, Peter told us, “Our history started in 1987 with the HiAce, so it’s a natural progression for us. This is a new model that came out in the middle of last year, and we’ve been in a 6-month design process to bring to the market what people expect of us.”

The most notable changes for the model is the engine out front, improving the van’s safety and driveability out of the box. For a campervan scenario, it’s also opened up a walk-through cabin, so occupants can move from the front seats to the camper area without leaving the vehicle. Peter told us this is just the first of the layouts they’ll be offering, as the work with the new, shorter-but-wider space in the back. He says, “This is an example of what we are doing with a model that has the engine out the front and walk through cab plus all the safety upgrades from Toyota and that’s meshing well with our product.”

One interesting feature is the gas stove in the kitchen, as Frontline was using metho stoves until recently when supply dried up, then portable butane stove to add versatility to the cooking area. Peter told us, “We’re trialling the gas stove for some of our clients who still want to have the cooking ability inside. We’ll see how it goes. I think there’s still a lot of people who prefer to cook outside, especially the smellier stuff, and it can be quite a hot environment in a small camper. But certainly, when boiling a kettle or something simple, but we’ll see what the market says.”Frontline expects to be in full production by April for the new campers. There are four vehicle variations available, including petrol, diesel, automatic and manual, although Peter expects the automatic diesel model will be the most popular. He said, “There’s 30 percent more power with this engine, and the engine is up the front, and that gives a different dynamic to the handling, and matched with the power, it’s quite a nice car to drive, much better than the previous model.”