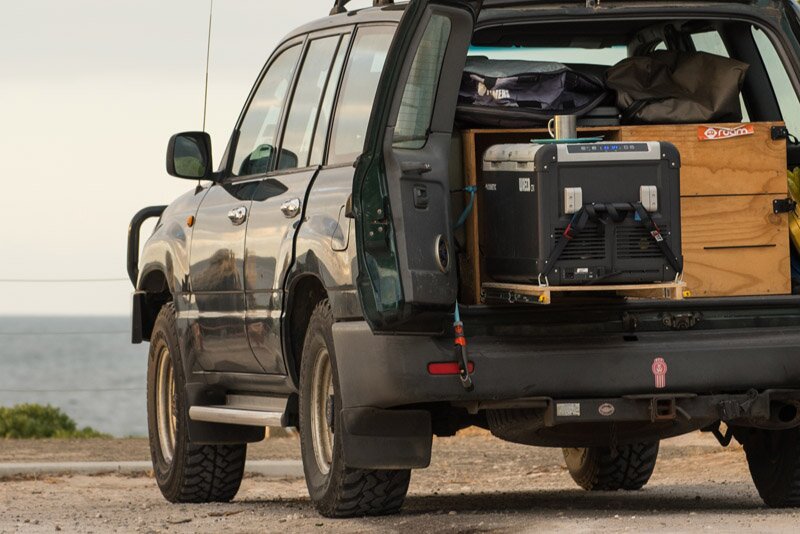 Almost 10 years ago, now, I bought a Waeco CF40, a 40-litre portable fridge for the back of my four-wheel drive. Fit to a slide, it was lugged around Australia for 9-months before being relegated to more mundane home-duties once that trip finished.

For the next seven years, I used it as a beer fridge, extra freezer and, of course, every time we went camping. But 40-litres isn’t enough for long trips with the family so about a year ago, I sold it to my brother, who shoved it under the floor of his 35-year-old yacht and has been using it as a deep freeze as he sails around the world. It’s never not turned on, not got cold and has never stopped working.

When I bought a new one, I couldn’t go past the Dometic CFX75 Dual Zone, which is a 71-litre chest fridge with two compressors, each responsible for cooling its own section of the fridge. It means I can have the two compartments set at different temperatures – one to freeze and one to refrigerate or both as a fridge or freezer. It also means that as food is eaten and the fridge starts to empty, I can turn off one side and save power.

Dometic says the fridge uses as little as 1 amp per hour if both compartments are on and set to 5°C in 32°C ambient, a figure that jumps to 2.9 amps if one compartment is set to -15°C. We’re currently in a heatwave and I’ve left the fridge in my 4WD for the last 24-hours, with both compartments set at 2°C. My battery has dropped from 12.7 volts to 12.4 in that time, which roughly translates to 1.6 amps an hour of usage (that’s about 60 per cent of my battery’s usable capacity). The car got to the officially recognised temperature of ‘stinkin’ hot’, so that’s not a bad result.

The main display panel is very easy to use, and although there’s a few more functions than the older CF fridges had, the process is the same to do just about everything, including turn on the fridge’s WiFi. When paired with the CFX app (available on Apple and Android devices), you can monitor the fridge’s status from afar (about 50 metres, I’ve found), check the battery’s voltage, change the temperature on each compartment and even set temperature warnings (although that feature’s of limited use as you’re not likely to be connected to the app all the time). You probably won’t be flicking to this app as often as you do Facebook, but it’s been handy. With a phone connected to the fridge, the phone is limited – it won’t connect to the internet at the same time.

My one complaint is that the blue LED screen is blindingly bright at night, so if Dometic could revert back to the old, dim green one, or even a red one, that’d be great.

Find out more about the Dometic range of CFX fridges at dometic.com. I bought mine from Off Grid Outfitters – offgridoutfitters.com.au. RRP is $1649