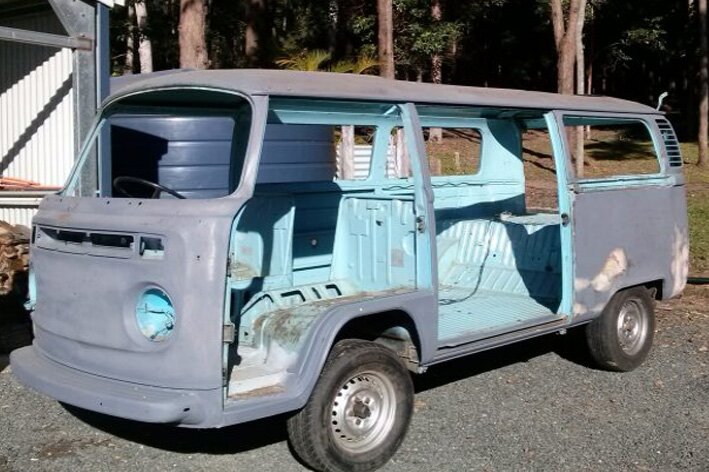 ANDREW BARTON and NICK TERAKES from Nimbin NSW are avid Volkswagen Kombi fans.  They already had a 1964 ute and 1975 Microbus in the garage, but when they heard about a classic 1976 camper coming up for sale, they decided they had to make room for one more VW.
How did you find the vehicle and what condition was it in?

We were in our other Kombi at an annual Easter gathering of the Kombi Club, this particular year, it was in Griffith NSW. Traveling home, we stopped for a night in Coonabarabran.  As Kombis are such iconic vehicles, it seems almost everyone loves to share a story about having owned one, or a parent or relative enjoying one. We were talking to a couple who were in an old Humber Snipe, when the wife said, “I have a sister who has a Camper and she’s thinking of selling it”.   Needless to say, we did a detour to Texas on our way home to see it.  It had flaking paint that had been hand brushed on, plus a few bumps and knocks and some surface rust.  But as far as we could tell, it was otherwise in good condition body wise. The interior had been butchered and smelled like it had been used as a petting zoo!  For us it was a chance to do a reno ourselves for the first time.

What do you know of its history and background?

When we purchased it, it had spent about six years in Queensland’s Stanthorpe region.  Prior to that it had various owners in Bundaberg QLD, Shepparton VIC and Edwardstown SA. It’s great when owners keep paperwork for cars, as it lets you see where it’s been and who owned it.  We are planning on trying to contact previous owners to show them where their former car is, and how it now looks.

What did the restoration involve?

The interior was beyond repair, so the first thing we did was to gut it.  All the seats, cabinetry, door cards and dash… the lot came out.   We then took the exterior back to bare metal to see what exactly we were dealing with. There was bog everywhere, and some rust in the usual places… bottoms of windows, battery trays etc.  But luckily the bog was from dents not rust, and so we took it to some old-school panel beaters who knocked it back out to its former glory. We had a local spray painter who did a masterful job.  Our next task was to try and put it back together again

Although it was a huge and sometimes frustrating project, the sense of satisfaction at the end is enormous, and the positive comments from others make it all worthwhile. Don’t hesitate to give it a go.  Bag, tag and photograph everything. YouTube is a great tool for the things you forget, and the Kombi Club Forum is filled with knowledgeable people who can help if you get stuck.

What makes it so special – have you named it?

The special thing about Bobby (yes of course he has a name) is that it was a labour of love.  We know every inch of him, inside and out. And of course, we now have a beautiful vehicle that we love spending time in.

What are your future plans for it, such as travel?

Being members of Kombi club Australia, there are always events to look forward to. We travel great distances to places we would not ordinarily visit. Our next big gathering is at Swansea, NSW at Easter.

For the full Reno rescue story, see Issue 25 of ROAM