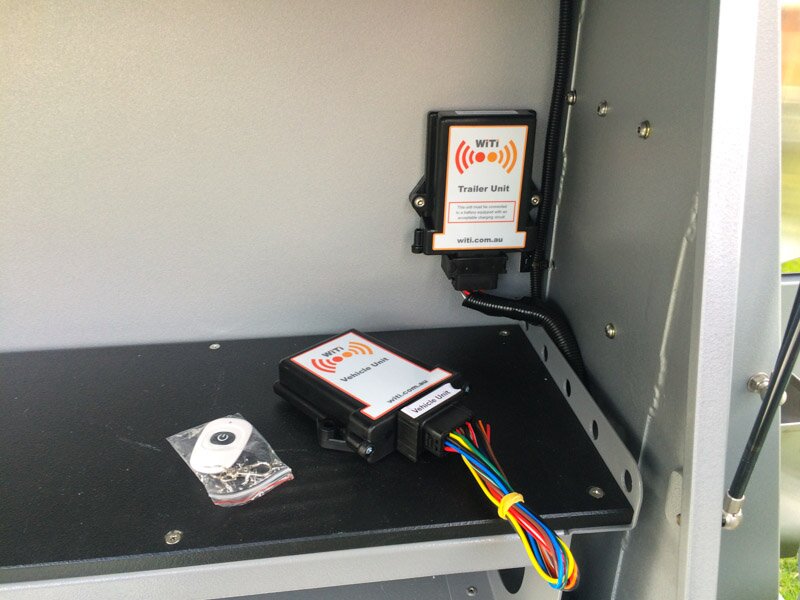 Trailer plugs are as synonymous with caravanning as ball hitches and arguments about shackles. And there are so many different types of trailer plugs, that there’s almost a whole industry centred around adaptors between the different types. But a Western Australian invention is negating the need for both plugs and adaptors.

WiTi (Wireless Trailer Integration) uses another Australian invention, WiFi, to transmit electrical signals between the car and trailer to control nearly all of the systems a traditional (12-flat, 7-flat, 7-, 5-, 6- or 13-round) plugs normally would via a solid electrical connection. That includes braking systems, lights, indicators and reversing lights. There are also circuits for alarms, a trailer anti-theft system and ignition feed to tell things like DC-DC chargers to turn on. It’s currently on display at the Queensland Caravan, Camping & Touring Supershow.

Two boxes replace the traditional multi-core cable that runs between car and caravan – a sender box in the car and a receiver in the caravan (or trailer, horse-float or boat trailer), which talk to each other over encrypted WiFi (although there is no internet connection – it’s just a simple data transfer from one box to the other).

It was developed by Tony Maddison, an electrical and IT engineer who, after losing his own trailer plug to corrugations in the Pilbara, decided there must be a better way. It was five years in development, and launched alongside updated in legislation that allows the wireless connectivity of cars and trailers.

The system is capable of being an anti-theft device (if someone tries to move your caravan or camper, it will apply the brakes and sound an alarm), can integrate GPS tracking, and function as the wireless connection. It also integrated it’s own proprietary brake controlled (but will work with any other brake controller on the market, or in your car, currently) and features a downhill brake assist, which works by measuring the angle of descent and adjusting the brakes accordingly. As most brake controllers work off an inertial system, and there’s no inertial force when travelling steadily down a hill, traditional brake controllers often don’t brake effectively down long hills.

The wireless integration and anti-theft system retails for $799, plus another $149 for the brake controller, which is a fair bit more expensive than even a good brake controller, a few trailer plugs and wire, but there are quite notable benefits. There’s very little chance of a poor connection due to dirt, corrosion or breakage, because the units wire straight into the vehicle and camper’s harnesses, for instance. The connection also can’t be broken by stones or corrugations or as a result of heavy off-roading, stray sticks or even just not plugging it in correctly. The connection will also never be the reason your trailer lights don’t work.

This is interesting tech using very common and well developped ideas. It may or may not spell the end of wired connections to trailers, but really does open so many possibilities. Now it only tells lights and brakes to turn on, but what other data could be transmitted as it develops? How else could it integrate with the car’s safety systems to make the trailer safer? The ideas are probably endless. We’re looking forward to the chance to properly review the tech. Keep an eye on ROAM magazine for updates.