Although it’s is a controversial claim, scientists have tested the sand of Lucky Bay in Cape Le Grand National Park and declared it the whitest in Australia. Jervis Bay and Whitehaven Beach may argue, the National Committee on Soil and Terrain undertook measurements and determined Lucky Bay has the whitest beach sand in Australia.

Just 50km by road, Esperance is the nearest town. Now here’s the thing. Lucky Bay is not the only whitest beach in the region, but there are hundreds of them. There are also spectacular granite headlands jutting into stunningly blue seas, granite peaks, interesting rock formations and superb displays of wildflowers in spring.

Many visitors are intrigued by the National Park’s French sounding name. Back in 1792, a French vessel named L’Esperance sailed on by this spectacular coastline. The ships captain, Admiral D’Entrecasteaux named a prominent landmark after his officer, Le Grand. The officer was so honored and no doubt relieved because he sighted a bay to provide protection from a raging gale threatening their safety.

Lucky Bay, as it’s appropriately called, typifies the classic picture postcard of what a beach should look like. So white and the water so aqua, it’s almost unbelievable until you see it for yourself.  Unlike back in 1792, there is now a campsite featuring showers and toilets. Obviously, with these facilities, fees apply. The other camp site in Cape Le Grand National Park is at Le Grand Beach. Both locations are caravan friendly, but there’s no power. 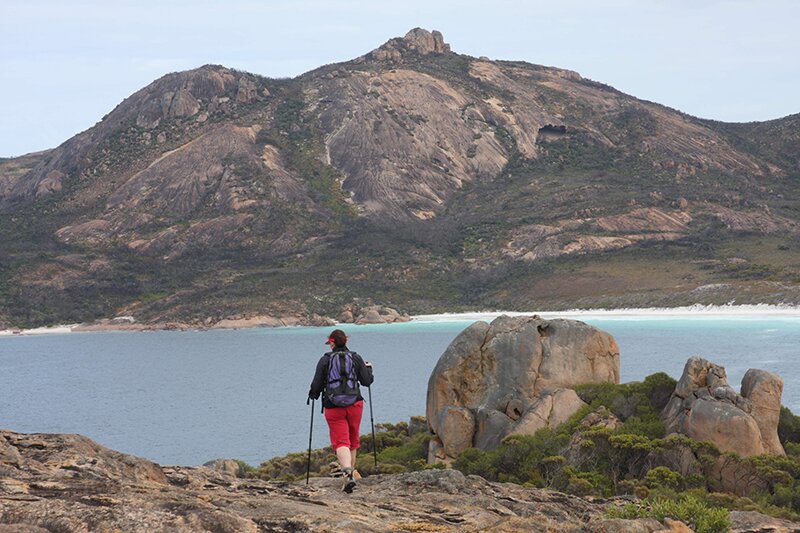 One way of accessing the park is by an edgy and exhilarating beach drive. The camping ground behind the dunes at Le Grand beach is 23km east of Esperance along a sweeping bay. You enter, minus your caravan, at Bandy Creek near Esperance and take on usually firm white sand. Occasional soft sections ensure that you stay in 4WD and reduce tyre pressures. Take care to ensure the tide is out. Winter storms can pump in waves surging right up to the dunes, but in summer, the beach is often a good 30 metres wide.

This is one spectacular drive, but don’t despair if you only have a 2WD vehicle. You can also access spectacular parts of the park and both camp grounds via a good sealed road.

While in the park, there’s plenty to keep visitors satisfied for days if not weeks. The series of bays are all accessible by 2WD down dirt tracks. From west to east are Le Grand Beach where anglers park their 4WD’s waiting for some Australian salmon action. Next is one of my favorites, Hellfire Bay. Both ends of this curved white bay are guarded by spectacular granite headlands.

Unlike most bays in Cape Le Grand National Park, Thistle Cove is less sand and more rock. Rocky outcrops drop into the blue ocean where swells surge creating a spectacular sight. You should err on the side of caution as one slip could be a disaster. Walk along the pristine white sands of Lucky Bay and you are likely to see kangaroos lazing in the sun, almost oblivious to your presence.    Driving along Rossiter Bay offers a bigger 4WD challenge and many who try get stuck. 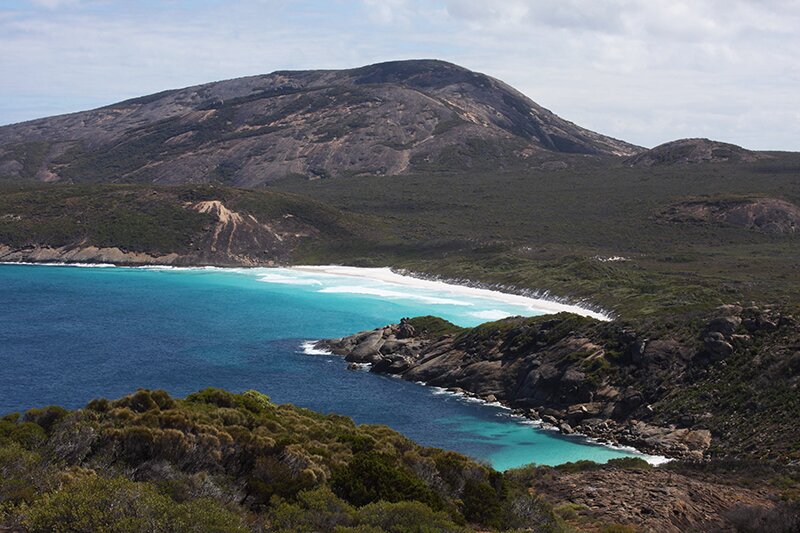 From a distance, Frenchman’s peak can, with some imagination, resemble a beret on top of a steep sided hill.  A climb of 45 minutes takes you up this fairly steep slope for excellent coastal views from the top.

There are several designated walks within the park but none more challenging and rewarding than the 15km long Cape Le Grand Coastal Trail. This walk for the physically fit is chockablock full of scenic highlights. Rocky headlands, sweeping bays, views out to the Recherché Archipelago islands and splendid wildflower displays in spring and early summer make this one of the more spectacular walking trails in WA.  If doing the lot in one go seems a little daunting, shorter sections are possible such as the popular two hour bit from Thistle Cove to Hellfire Bay.

For many holiday makers, Cape Le Grand is the main attraction, but it is by no means the only one in the Esperance region.

When looking out to sea from either Esperance or Cape Le Grand you can’t help but notice many rounded islands. Like many places along south coast, these islands have a French connection. Named after the French vessel, Le Recherché, the Archipelago is a series of 150 bumps and larger islands. 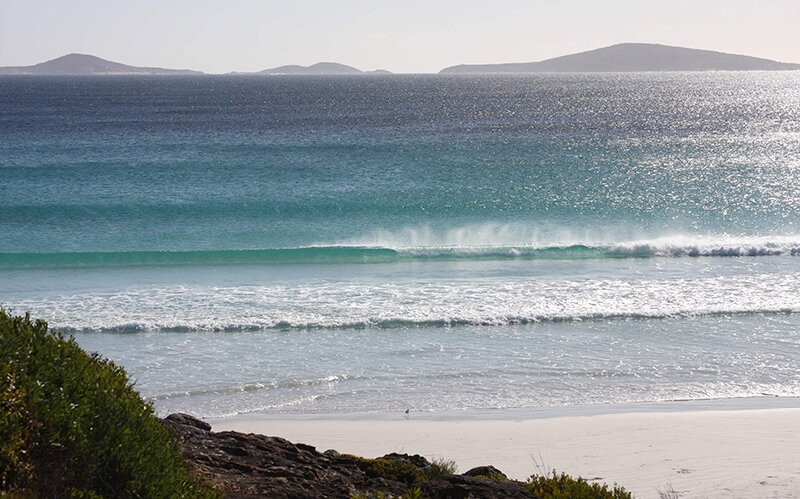 Access to the islands is via MacKenzies Island Cruises operating from Esperance. They take a half day tour past the small sea lion colonies on Charlie, Rabbit and Cull Islands. The cruise culminates at the larger Woody Island, where a kiosk supplies refreshments.  For those who are into solitude, you can stay overnight in either permanent safari tents or hire or BYO tent in the campsites available.

The water surrounding the islands is cold and clear, making it perfect for scuba divers with thick wetsuits. The marine life is rich and diverse making these islands a drawl card for scuba divers from around the world.

As for the mainland, the beaches are exceptionally inviting visually. But, being on the south coast, the water can be a little chilly in the earlier summer months. By February and March, it’s warmer but still very refreshing.

Esperance itself is a vibrant town and port of around 5000 people. It has a full range of accommodation from caravan parks to hotel rooms. There are a wide variety of restaurants, shops and supermarkets for replenishing the supplies after the long trip across the Nullarbor. A great place for a post camping revitalisation is the historic Taylor Street Tearooms, a former hospital with relaxing views overlooking Esperance Bay. 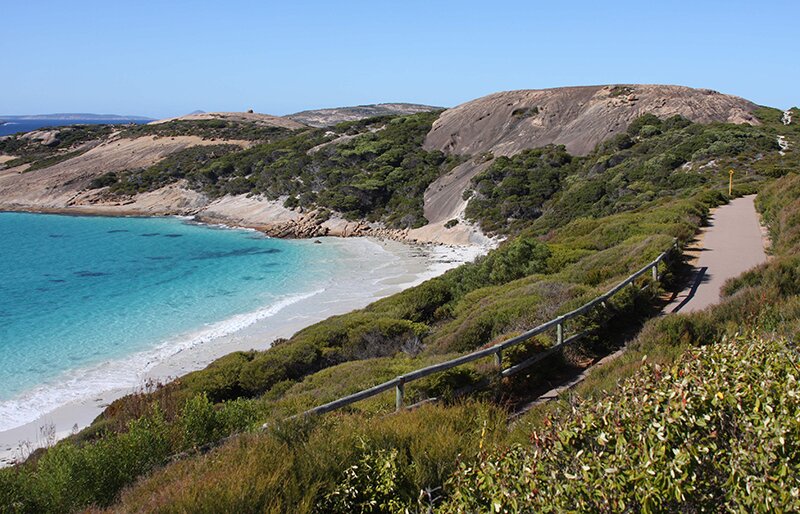 By far the most impressive scenery in Esperance township its self is the ‘must do’ Great Ocean Drive. The drive previously called the Tourist Loop is 38km in length and passes great beaches. Turning inland, the road heads pass Pink Lake. The water sometimes appears bright pink because of an algae growth. Interestingly, in recent years the pinkness hasn’t always been that evident. Man made features along the drive include the wind power generators that stand above the surrounding hillsides. This wind power adds a 22% boost to Esperance’s electricity supply.

More often than not Esperance is windy. Sometimes these winds pump in from Antarctic way producing bracing condition to say the least. Other times in summer, northerlies blow in from the desert causing temperatures to sour into the 40’s. Fortunately these temperatures rarely last long and it’s not uncommon for temperatures to drop 20 degrees the following day. Esperance can put Melbourne to shame with its four seasons in one day.

Words and photographs by Michael and Jane Pelusey

Esperance is 721km from Perth, 207km from Norseman and 402km from Kalgoorlie.

The best time to go is in the warmer months of spring, summer and autumn. These are also the driest months of the year. Temperatures can be warm but are short lived. January’s average maximum is 26° C.