Travel – Noosa to Inskip Point on the beach

From the north side of Noosa all the way to Inskip Point (the sandy spit that almost touches Fraser Island) is a trip that takes over two hours if done in a conventional car on conventional roads. There are pretty sections along it, but it’s otherwise boring and often busy with local traffic. There’s a shortcut, though, for those who don’t mind a bit of sand and salt splashed on their cars, and who don’t mind if short-cuts end up taking a few days, rather than just over an hour. Welcome to the Cooloola Coast, a beach-driving, camping, fishing and surfing paradise just a couple of hours north of Brisbane. Despite being one of the most popular beach-driving locations in all of Australia, if you can get there outside of school holidays, the whole coast is usually quiet and uncrowded, just waiting for people to explore the four different beach sections and local water ways.

After stocking up on fuel and essentials in Noosa, you’ll need to jump on the Tewantin Ferry, which takes vehicles over Noosa River. There’s a small fee and eftpos isn’t available, so bring $7 in cash, or up to $16 if you’re towing a trailer or caravan, to pay the ferryman. Once on the Noosa North Shore, it’s only a short drive to 1st Cutting which gives vehicle access to the southern end of Teewah Beach, down to the mouth of the Noosa River. This is only a very short, three-kilometre section that’s almost impassable at high-tide and is also popular with horse riders. If you come in December you might be lucky enough to spot a sanderling nest and eggs, which is most likely to be in the high-tide debris, or often in old tyre ruts, so take care to only drive below the high-tide mark. 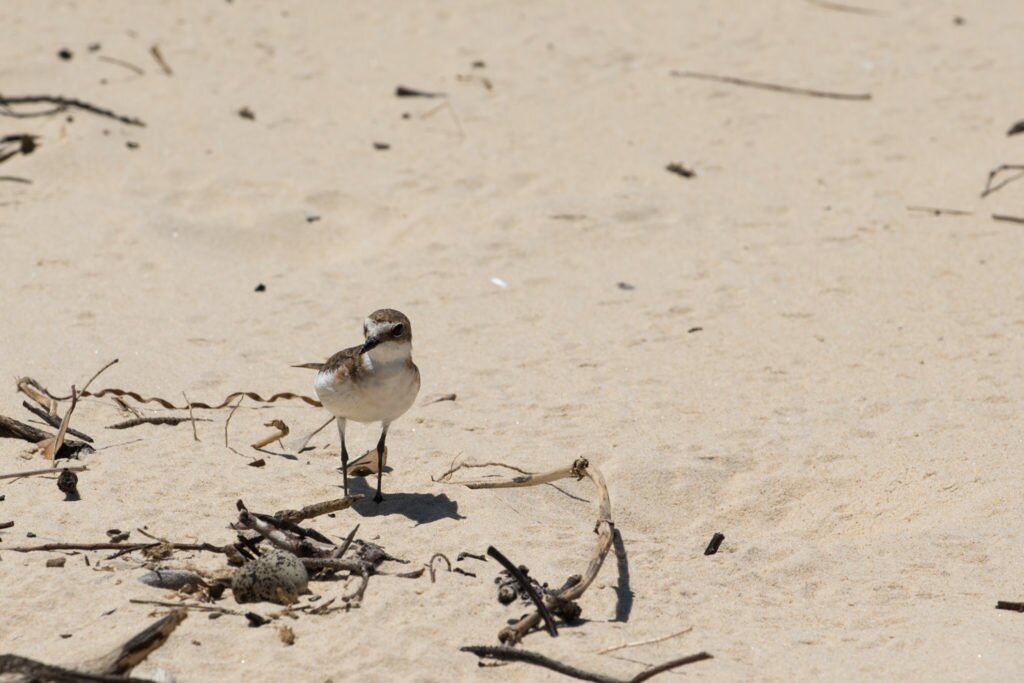 Back on Beach Road, continue north past Noosa North Shore Camping to 3rd Cutting, the entry point to the rest of Teewah Beach and the route north. There’s 45km of sand between you and the track to Double Island Point, but if you plan your trip to be on the beach two hours either side of low tide, the driving is smooth and easy, even in a ‘soft-roader’. In fact, it’s so easy, the local police often set up speed traps to make sure adventurers don’t get carried away by the highway like conditions. Speed limits do apply on the beaches, and as there is often children playing, it’s wise to stick to them.

About 17km north of 3rd Cutting, a spill of deep red sand stretches out onto the beach. This is one of the coloured sand sections of Teewah beach, the result of oxidisation and natural tree dies colouring the dunes. In some places where the dune is too steep to support plant-life, many different colours are displayed. Follow the path into the dunes and you can climb to the top for incredibly views up and down the beach.

It’s 20km from 3rd Cutting to the Teewah Beach camping zones which is a roughly 20km strip of self-contained camp sites behind the foredunes. During busy times, groups of campers set up flags and decorations at the entrances to let friends and family know where they are, but in the quieter times is quite common to find a campsite that’s not in eyesight or earshot of any other camper on the beach. 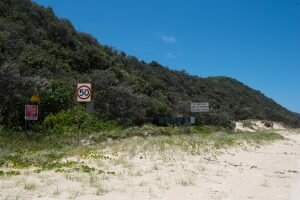 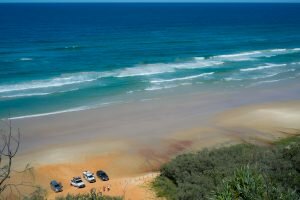 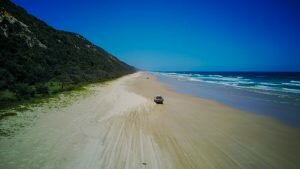 Roughly half-way along the camping zone is the entrance to King Bore Circuit, a 40km long circuit of sandy, and often challenging tracks that’s only accessible from the beach now that the entrance from Rainbow Beach Road has been closed. It’s a very pretty track which begins in eucalypt forest, but eventually transforms into a dense rainforest of strangler figs, crab apple, ribbonwood and bolly gums, all well-watered thanks to the average 1500mm of rain the area receives each year. This is a remote and signposted track, so take care, don’t wreck it by driving where you shouldn’t, and be prepared to recover yourself if you get bogged.

Fishing is really popular all the way along the beach, and it’s not uncommon to catch a good feed of whiting, dart or bream just on dusk. Most of the locals fish using baits collected on the beach, like beach worm (for whiting) and pippies (great for dart and bream) which can be found around the mid-tide area by shuffling your feet in the sand as the waves wash over to dig them up. If you don’t find some after a few shuffles, move somewhere else. In winter, the target species is tailor, a popular sport fish that’s best eaten fresh and caught on a gang hook with a big oily pilchard. 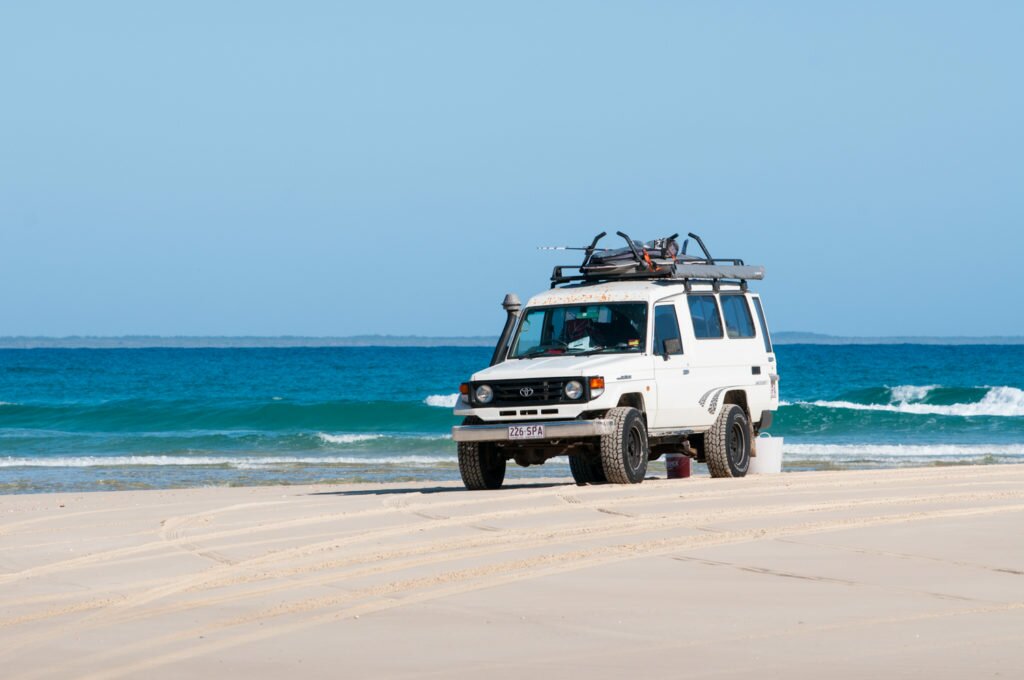 At the north end of Teewah, there are two exits which will get you to the town of Rainbow Beach, an isolated resort town that’s the last stop before Fraser Island. The first exit takes you along the Freshwater Track, which is a 22km winding, single-lane sand track that takes about an hour to complete. It’s another very pretty track through a forest of strangler figs and vines that even Tarzan would be proud of. The only reason to take it, though, is if the tide is too high to drive along Rainbow Beach. Near its beginning is the popular Freshwater camping area which is more developed than anything down the beach and has showers, toilets and drinking water.

If the tide is on its way down and within two hours of low, then it’s far quicker and easier to continue up to Double Island Point via the Leisha Track. Double Island Point is best known for its incredible surfing wave on the north side of the point (although every time I go there it’s either too small or too windy), and as the unconfirmed location of one of the places surfed in the Bruce Brown documentary, Endless Summer II. On days of bigger swell, the water can often wash over the beach into sand gullies which create shallow swimming holes or deep, salty places to get your 4WD bogged. Choose wisely. The drive from Double Island Point to Rainbow Beach is as easy as they come – if you wait for the aforementioned tidal conditions, that is. I’ve done it in everything from a V8 Toyota LandCruiser Troopy to a Hyundai Santa Fe in which I forgot to engage the centre diff-lock. So if you’ve got some beach driving experience and let down your tyres adequately, any AWD SUV with decent ground clearance should be okay.

What makes it hard, though, is the Middle Rocks section, which on anything higher than two-hours from low tide, has waves washing all the way across the beach. More than one 4WDer has lost his pride-and-joy here, so if in doubt, wait it out (or drive back along the Freshwater track). Even on the lowest of tides, though, be carefuly of exposed sections of coffee rock, which I’ve seen even very capable four-wheel drives get stuck on because the driver wasn’t paying attention. One fella I came across had to leave his LandCruiser 76 Series Dual Cab ute to the tide as a result, poor bugger.

I love Rainbow Beach township as great place to get a good coffee, cooked breakky or pie and to restock the fridge and somewhere to buy firewood. There’s both an IGA and Foodworks, a bottle shop and a couple of good eateries on the main strip. You’ll have to pass through it to get to the Inskip Peninsula, my favourite place on this stretch of (mainland) coast to camp. 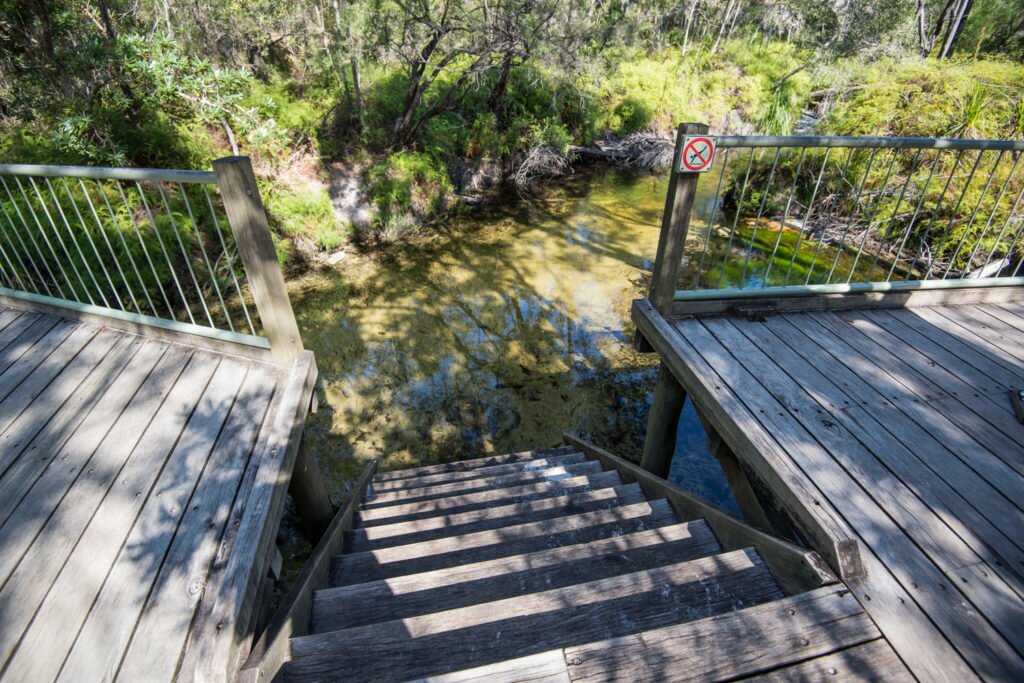 Near Rainbow Beach is Searys Creek, a great freshwater pool to wash the salt off in

There are five camping areas on Inskip Point which vary between absolute beachfront that you’ll need a 4WD to get to, right through to 2WD accessible, shady and sheltered spots that are popular with grey nomads soaking up the Queensland sun for the entirety of winter. Most of the camping areas have a composting toilet or two, but you’ll need to be self-sufficient past that. Like all of the campsites I’ve so far mentioned, it costs $5.65 per person, per night. Here, though, pets are allowed, even on the beachfront. Although you need to book ahead, there are no marked sights, so in busy times its often a case of setting up where you can.

Adding a touch of danger to the experience, in September of 2016, a very significant chunk of one of Inskip Points camp areas just fell into the ocean, creating a massive sink hole as it did. To this day there is still a Toyota Prado and Jayco caravan hitched together and buried under the sand, its occupants and their two dogs only narrowly escaping as it was sucked into an abyss. Much of that campsite has since been closed off, but scientists couldn’t rule out the chance of it happening again. Sleep tight… 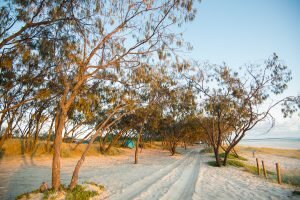 Camping on the beach at Inskip 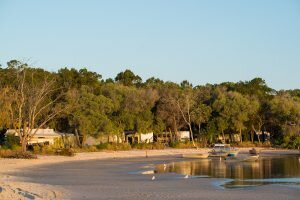 Camping on the shores of Tin Can Bay 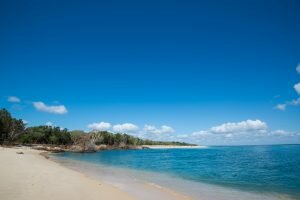 Inskip Point is most popular as a fishing destination, which access to the ocean waters off the northern section of Rainbow Beach (which can be driven on as far south as the township) and the waters of Tin Can Bay. Boat ramps at both Bullock and Carlo Points have always got a healthy amount of 4WDs and empty boat trailers parked up. It’s well worth taking a visit to the end of Inskip, though, to watch the busy procession of four-wheel drives head up to the Fraser Island ferry. The short, 300m drive from the bitumen to the ferry is the softest, most notorious stretch of sand so far in Queensland, and countless amounts of people get bogged here. So many in fact, there’s even a Facebook page specifically dedicated to videos of people getting bogged getting off of, or onto the ferry. Don’t get bogged at Inskip Point

If you’re continuing onto Fraser Island (which I highly recommend), then this has just been a precursor to a great adventure. If this is as far as you go, it’s already been one. With excellent camping, faultless fishing and great four-wheel-driving, everywhere north of Noosa is an incredibly place to visit.