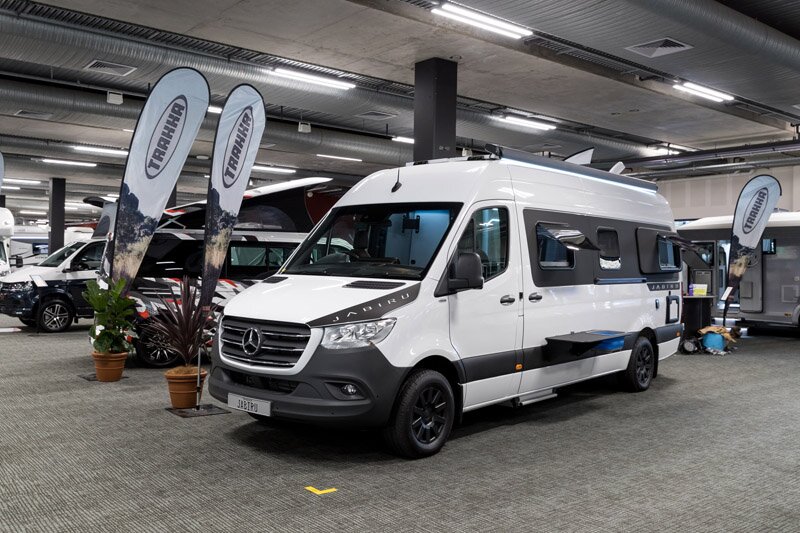 The New Trakka Jabiru is Unbelievable

For months now, Trakka has been teasing out the release of its updated Jabiru, the companies flagship large campervan based on the Mercedes-Benz Sprinter. It’s been seen for the first time at the Sydney Caravan Camping Holiday Supershow and it’s, for lack of a better term, out of this world.

The updated Merc is the only sensible base for a motorhome like this. I got the chance to take one away for a trip a few weeks ago (read about it in issue 38 of ROAM) and they are just incredible to drive. Gone are the days when motorhomes and campervans force you to drive uncomfortable commercial vehicles – the new Sprinter is powerful, smooth, quiet and sophisticated. In fact, the best place to sit, whether on the road or at camp is in the swivelled front seats.

There’s a whole lot of things that make the new Jabiru a show stopper, but I’ll stick to the highlights. Firstly, as you walk in there’s a swivelling, fridge drawer under the bench. If you’re relaxing outside, you can spin it so it opens out, although if you’re cooking inside, it swings back to open in to the kitchen. It’s simple genius.

The real fridge has a door which opens both ways. It has clever hinges on either side, so whether you like opening from the left or the right side of the fridge, you can do it.

Up the back, Trakka’s integrated its day-bed concept into the Jabiru’s rear sleeping area. Somewhat like a banana lounge (or hospital bed) the the ends can be raised so you can recline at leisure during the day, and flatten them out again at night. It’s an excellent way of creating really inviting living space in the small area of a van’s body.

Trakka has also updated the switch-mode bathroom. There’s now a swivelling Dometic toilet inside, rather than the single-piece moulded Thetford version they’ve traditionally used, which packs away far neater. The door’s also been moved, so if the toilet is extended out, you don’t walk over it to get into the bathroom. There’s even other simple upgrades, like a waterproof toilet-roll holder, so it can’t get wet when you have a shower.

There’s also a move to more modern materials and concepts through the campervan. The floor, which used to be plywood, is now a fibreglass-reinforced thermoplastic composite material which is lightweight, non-absorbing and incredibly strong . The benchtops are made from an environmentally friendly, 3D laminate which is notably thin, but very strong, scratch resistant and water resistant. The electrical system is based around a 200Ah lithium battery and 300-watts of solar panels, while a GSM antenna replaces the standard wind-up one, so you can have Netflix and free-to-air TV in the van.

Currently it’s only available in 2WD, but a 4WD version is expected in the comming months – the first 4WD Mercs will land in July.

For those who’re after the numbers, the van has a 3.0-litre V6 diesel with 140kW and 440Nm. There’s a seven speed auto in both drive-train variants. Underneath it there’s a 140-litre water tank and 80-litre grey water tank. It’ll set the kids’ inheritance back at least $180,000.

Thinking of buying a motorhome or campervan? Subscribe to ROAM so you don’t miss any of our in-depth road and camp tests.