Like many Aussies car fanatics, I’ve always loved the sound of big V8. Combine this with the practicality of a 4WD dual cab and the ability to tow over 3 tonne and I’m pretty much in automotive heaven. And while age, family responsibilities and a less than impressive fiscal reality have played a part in moderating my current vehicle choice, it needs to be said that if money wasn’t a consideration, there would definitely be a 4WD V8 truck parked in my driveway today. What’s probably not too surprising is that when talking to many of my fellow caravanners around the campfire, I’m not on my Pat Malone with this; in fact, the latest car sales figures have 4WD dual cabs outselling just about everything else on the road at the moment.

It is with this stat in front of them, that RAM Trucks has made the clever decision to bring one of the USA’s top selling 4WD pick-up trucks over to Australia – and to remanufacture it to right-hand drive at its purpose-built facility in Melbourne. In fact, the Aussie factory is the only full-volume supplier of right hand drive RAM Trucks in the world! 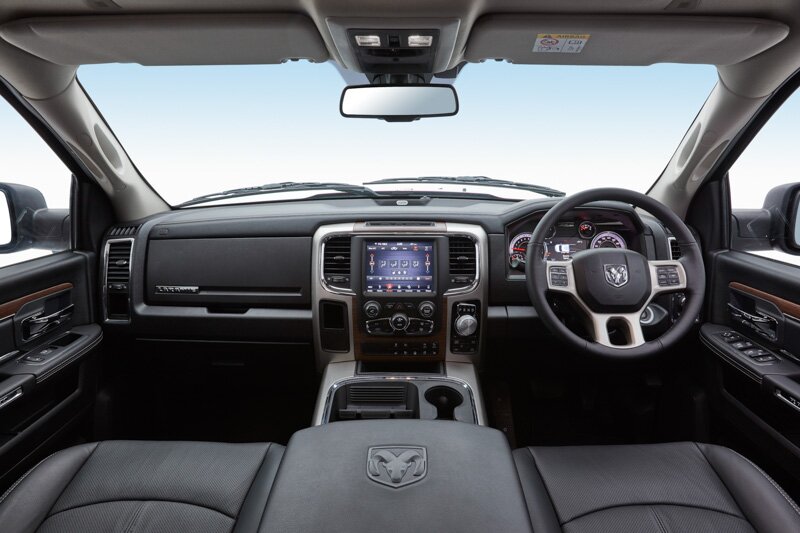 If you haven’t seen one on the road yet, don’t worry; you won’t miss it when it drives past for the first time. Noticeably larger than most other 4WD dual cabs on Australian roads (with the possible exception of the RAM 2500 and soon to be released Chevrolet Silverado) they are an impressive sight. Where you will really be impressed though, is in what they are capable of. For such a large truck, the 5.7L V8 petrol Hemi engine is surprisingly economical with a listed fuel consumption of just 9.9L per 100km. Now this is highway driving without a load, but still, when you consider that the 300kg lighter Toyota LandCruiser 79 Series GXL Double Cab-chassis with its 4.5-litre V8 turbo-diesel is claiming 10.7L/100km, then that’s pretty damn good. Couple that with a reported 7.8 seconds to go from 0 to 100km/h and you have yourself a seriously high performing 4WD ute.

For ROAM readers though, what will most interest you is the RAM 1500’s towing ability. There are two set-ups available, differentiated by axle ratio. This first has an axle ratio of 3.21:1 and a 3500kg braked towing capacity on a 50mm ball, while the second option has an axle ratio of 3.92:1 with a braked towing capacity of 4500kg on a 70mm ball. Fuel consumption obviously increases with the axle ratio, however for those who like to tow toys of the heavier variety, the GCM increases from 6262kg to a whopping 7237kg. Not much that this girl won’t be able to lug around! Moving to the inside of the 1500 Laramie, one of the first things you notice after jumping in is that there is a fair bit more interior room than other dual cab utes. The rear seats are comfortable with ample leg and head room, and you don’t sit bolt upright like some other dual cabs, which can get extremely uncomfortable on long trips for adult passengers. The leather seats are heated (front and back), as is the steering wheel (although this is probably not on the check list for most Australians).

The Infotainment system is controlled via an 8.4in Uconnect touchscreen, (with both Apple CarPlay and Google Android Auto built-in), has a 10 speaker Alpine Sound System, and all the usual navigation and entertainment options. Storage wise, the centre console has dual cup holders, as do the two-tiered doors pockets, and there is even a rubber backed pad in the centre designed to hold your smartphone in place.

The dashboard layout is easy to navigate, with steering wheel controls for both the sound system as well as the digital trip computer monitor next, which is located next to the speedo and can flip between live fuel consumption figures, distances travelled and street directions via the GPS navigation. 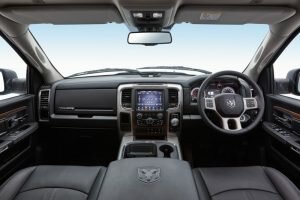 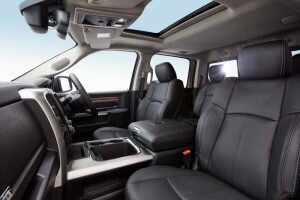 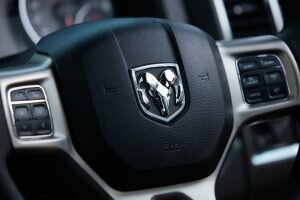 Driver vision is exceptional with oversized mirrors making light work of checking all angles around the vehicle, and the sloped front windscreen offering a clear view out front and also giving excellent peripheral vision to the side.

Outside, classic car fanatics will love the chrome grill, bumpers and badges, not to mention the 20in chrome clad wheels. Where you will really notice the difference though is all the extra features that come as standard on the 1500 Laramie, many of which you won’t find on a competitor’s list of optional extras. Topping this is the Rambox cargo management system. Located on both sides of the tray and providing 243 litres of storage space (each side) these remote locking bins are perfect for fishing rods, a chainsaw, tool boxes and anything else you normally take with you on a camping trip. They even have drainage holes that allow the space to be used as cold storage and filled with ice – perfect for drinks, holding today’s fresh catch or the next night’s dinner. Other standard features include a heavy-duty tow bar, side steps, fog lamps, and a spray in bed liner. 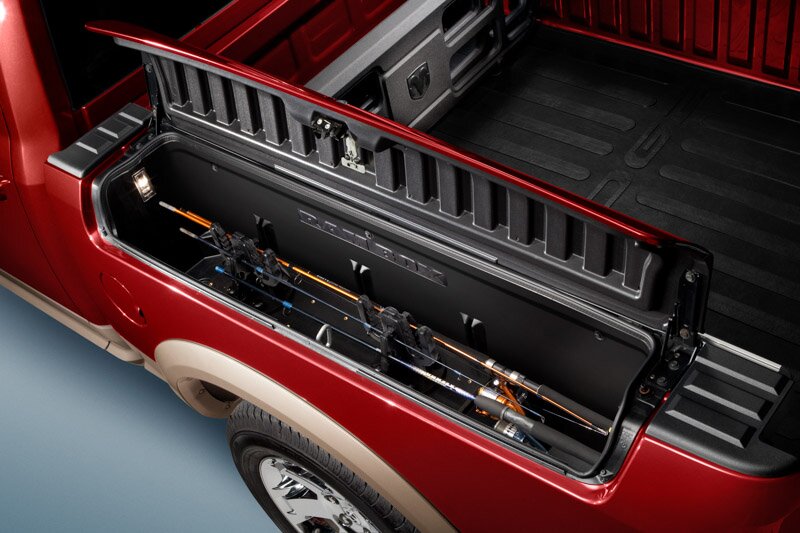 Wrapping up, you could probably surmise that overall, I have been pretty impressed by this vehicle. That’s true right up ’til we come to the dollars you need to fork over to have one parked in your drive. The Laramie, as tested, starts at $99,950 plus on-road costs. This is probably going to be the one thing that stops RAM from being becoming a mainstream option. Others may argue that it is the lack of a turbo diesel option, (RAM Australia’s Head Office tells me this will change later in the year) but for me, with the top selling Ford Ranger available at half that price (albeit without all the bells and whistles) I don’t think it is any danger of being knocked of its perch by the 1500 Laramie. Then again, that’s probably not a big worry for RAM as they are only looking to reach the top end of the market anyway.