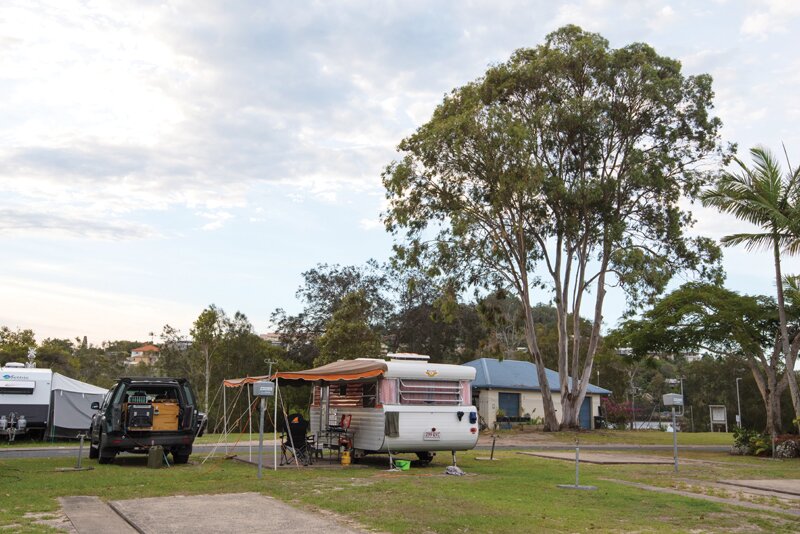 In the week that we stayed in Tweed Heads, we never actually made it to the actual headwaters of the Tweed River – a fact I only just realised as I sat down to write about it. In fact, I’m not even sure we set foot or line in the Tweed at all. I can’t be certain if it was an oversight or just the fact we never needed to wander that far to fill our days. I suspect it’s a little of both.

More specifically, we stayed at Boyds Bay (a little way up the Terranora Inlet, which flows into the Tweed) which is a full five-minute drive from Duranbah Beach, where the Tweed River meets the sea. We ventured at least half that distance, on a few occasions.

Tweed Holiday Parks Tweed Heads is idyllic. Set out in oval-shaped avenues of increasing sizes, its centrepiece is the shaded resort pool and barbeque area, where we spent most of our spare time.

We were never alone wallowing in the clear water of the temperature-regulated pool (it is heated in winter and cooled in summer). Some lay on pool chairs, others smiled at the shrieks of kids coming down the waterslide or the sun glinting through the palms. It was so refreshing we’d come here in between just about every activity we did. Have breakfast, jump in the pool; grab a coffee, go back to the pool; go for a swim in the river, follow it up with a dip in the pool. It never got monotonous. I wondered, at least once, if I could write a whole article about sitting around a pool.

The Tweed Coast is an interesting one. It is, for all intents and purposes, part of the Gold Coast. Coolangatta, in Queensland, is within walking distance and so is all the hustle, commercialism and crowded surf-breaks. But Tweed seems free of most of that – sure, there are people around, but there’s not much traffic, finding a seat in a café’s not hard, and it’s largely free of the Gold Coast’s fly-in tourists. Therefore, quieter as a result.

It’s the water that’s the area’s greatest attraction and getting onto the river is as easy as walking across the road and jumping off the wharf at Faux Park (which is a real park, believe it or not). There’s a perfect little beach just here, where you can choose between chucking in a line (there are better places to fish, though), or enjoying the warm waters of the inlet.

The most popular spot to swim, however, is over the other side, at John Follent Park. To get there, navigate to 60 Keith Compton Drive, and park up wherever you can. This bend in the Tweed River has created a tremendous sandy beach where you can wallow in the shallows or snorkel over the drop-off, spotting bream and whiting as they swim peacefully below. It’s also just a nice place to go for a walk along the foreshore. Here you’ll find shade under the pandanus, somewhere to beach your kayak or stand-up paddleboard, or plenty of green grass to relax on while reading a book in the sun.

Further up the inlet, at Keith Curran Park (which is actually on a small island), there’s a great walk through the fig trees, all covered in vines, out to a boardwalk, which ventures out over the water and through the mangrove. Obviously a fish sanctuary, large schools of adolescent whiting swim below, enjoying their relative safety the walk affords them. Slap on some mossie repellent, though – they’re rife in the shade here.

If you’re keen to throw in a line and try for a feed, you’re a good chance of landing the standard bream, flatties and whiting, although the inlet is also great for mangrove jack (in summer), queenfish and trevally. A boat helps, and you can hire one easily from Tweed River Boat Hire, which has its jetty just through the back gate of the holiday park.

Dan Le Mura from Addict Tackle, the local fishing store (addicttackle.com.au) says there’s excellent fishing from both land and boat. He told me to head down to the Coolangatta Golf course and walk along the foreshore, around Chinderah rock wall or Dodds Island (the piggery, to locals), if you don’t mind travelling a little way.

Soft plastics are a really popular lure; generally a three- to five-inch grub or curly tail, or pump yabbies from the sand flats. Live worms, pilchards and prawns are also really successful baits. You can buy bait at the park’s reception.

Even if you’re not into fishing, getting out on the water in a boat or kayak means you’ll be able to find a little beach, all to yourself, to while away an afternoon. Then you can head back to the pool afterwards.

And being so close to what is easily Australia’s best surfing coast, if you surf, you really shouldn’t miss a chance to catch a wave or two over the border. The stretch of beaches, from Snapper Rocks all the way north to Currumbin Alley, offer some of the best right-hand point breaks in Australia, and although the crowds can be intense (I’ve paddled out at Snapper Rocks and not managed to get a single wave because of them), just one wave can sometimes be worth it. I suggest paddling out at Greenmount Beach if you don’t want to travel far from the caravan park, or Currumbin Alley if you’re prepared to drive 10 minutes north (and you’ll probably get more waves here, anyway). If the points are too busy, try surfing the beaches near Elephant Rock or Palm Beach. When the surf’s smaller than three feet, it can be really quite enjoyable on a longboard. Bigger than that and the shortboard crowds really get intense.

For less energetic enjoyment, watching the surfers from the balcony of the Rainbow Beach Surf Club is one of the region’s distinct pleasures, but not its only one. There is no shortage of great places to eat and plenty are within walking distance of the holiday park. For coffee, wander out the back gate and across the bridge to Baked at Ancora. It gets busy late in the mornings, but early it’s a quiet place to get a good feed and great coffee, sitting on the balcony over the creek. For dinner, Twin Towns is the place to go – there’s nearly always some sort of entertainment, a great bistro and cold drinks.

Best of all, though, this is the sort of holiday park you can be happy just to sit around at, under the awning reading a book. Occasionally you might get up to go for a dip in the pool, or wander along the banks of the river, but even if you don’t manage those things too often, you won’t feel like you’ve wasted too many opportunities. There’s plenty of time to be busy, these days, anyway.

Tweed Holiday Parks Tweed Heads has just been shortlisted in the 2019 Caravan Camping Industry Association Awards of Excellence. The winners will be announced on November 7 at an event in Sydney. Park Manager, Angela Hodge said, “We are honoured to be selected for an award of this status and to be amongst parks of high calibre from around the state.”

The park has just completed a $1.5 million dollar makeover of its foreshore area, including eight new cabins and outdoor cooking areas. Find out more at tweedholidayparks.com.au

Read more great stories about Aussie travel in the ROAM magazine app. Read every issue of the magazine ever, with a 7-day free trial.