The promise of a luxury caravan is not so far reached as it used to be. We’ve all noticed that nearly every van on the market is fitted with its own shower and toilet, air conditioning and a very well appointed bed. So it shouldn’t be a surprise to find vans that take all that a little further. The Living Edge Bellagio 7.2D is one of a few new caravans trending towards centrally located ensuites which very effectively divide the living area from the sleeping area – these caravans have rooms!

This isn’t a completely new thing, many caravans with European origins have been utilising a similar floorplan for decades (for example, the Swift Elegance 650 or Baileys Unicorn Pamplona are two Brit vans which have near perfected the layout), but there’s nothing new under the sun, as the saying goes. 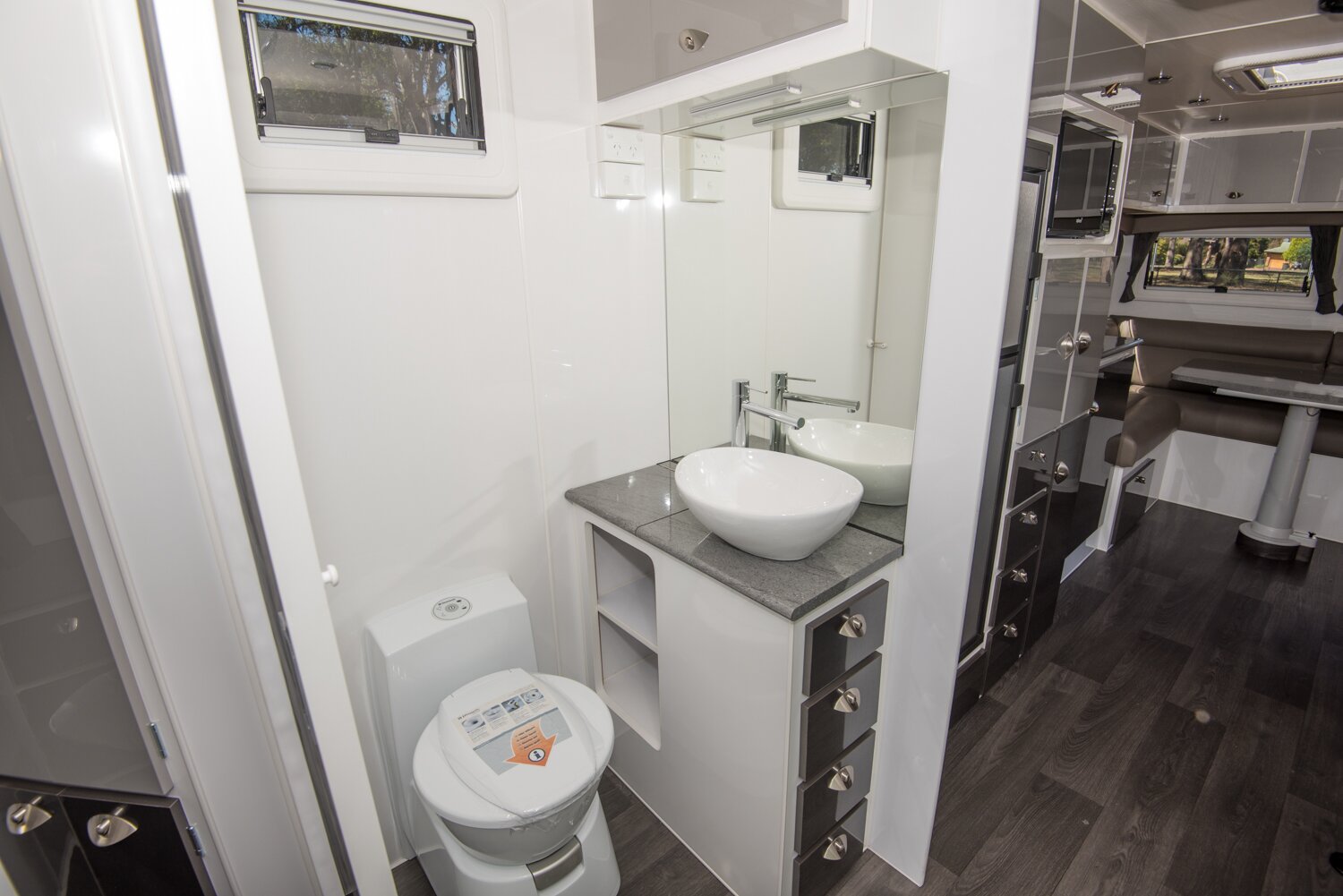 Having a central ensuite divides the two main living areas but still allows plenty of space.

Especially in longer vans, like this 22-foot Bellagio, a layout like this opens up the living space, eliminating for the most part, that narrow corridor feeling many long vans have. The wraparound club lounge at the rear doesn’t encroach into the kitchen, so it nearly (and I mean nearly) feels like you’re in a van with a slide-out section.

And while there might be some times you’re inconvenienced by an occupied bathroom blocking access to one side of the van or the other, the benefits of two defined areas will be well recognised when one of you can sleep in while the other cooks breakfast in the separated kitchen. 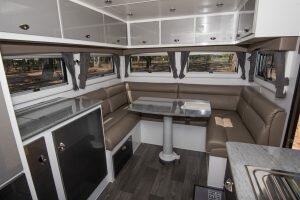 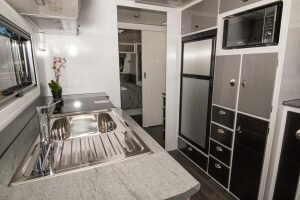 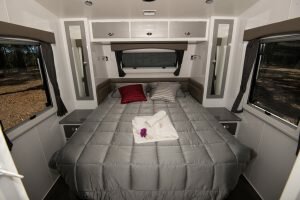 The Living Edge Bellagio tows well – we test it behind a Dodge Ram Laramine 2500, so it posed little drama for the big American pick-up. This is a reasonably hefty van, though, so bigger tow cars, like the Ram, a LandCruiser or Land Rover Discovery will be best suited to the task. It weighs 2600kg empty, with a 3100kg Aggregate Trailer Mass. Expect to have more than 300kg on the ball once it’s loaded up, too.

Living Edge offers its vans in two spec levels, although it’s hard to fault the Bellagio’s features list, even if it is the ‘base’ model. It’s fitted with Dexter independent suspension and Dexter Anti Sway Control, with a six-inch chassis right through. A 95-litre water tank sits either side of the axles offering nearly 200 litres of water storage, with a third tank for grey water also fitted. 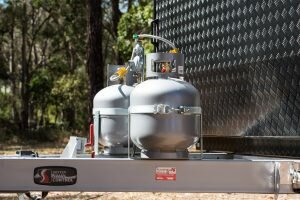 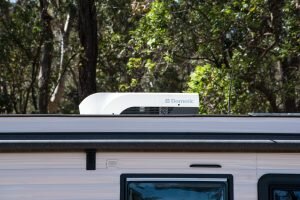 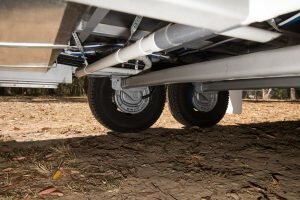 Inside, the club lounge is upholstered in leather, there’s an air conditioner and washing machine, as well as telly, antenna and a large 184-litre fridge/freezer. You’d not be left wanting at camp, that’s for sure. If you can plug in a solar panel to keep the battery going a few days, it’ll even be quite comfortable for a few days free camping.

There’s a bit of exposed plumbing, (including a pump) forward of the tanks, which is at some risk of stone damage, that I’d rather see better concealed, but otherwise, the 7.2D presents very well at quite a reasonable price. If it’s a big comfortable van you’re after, this is worth adding to the short list. 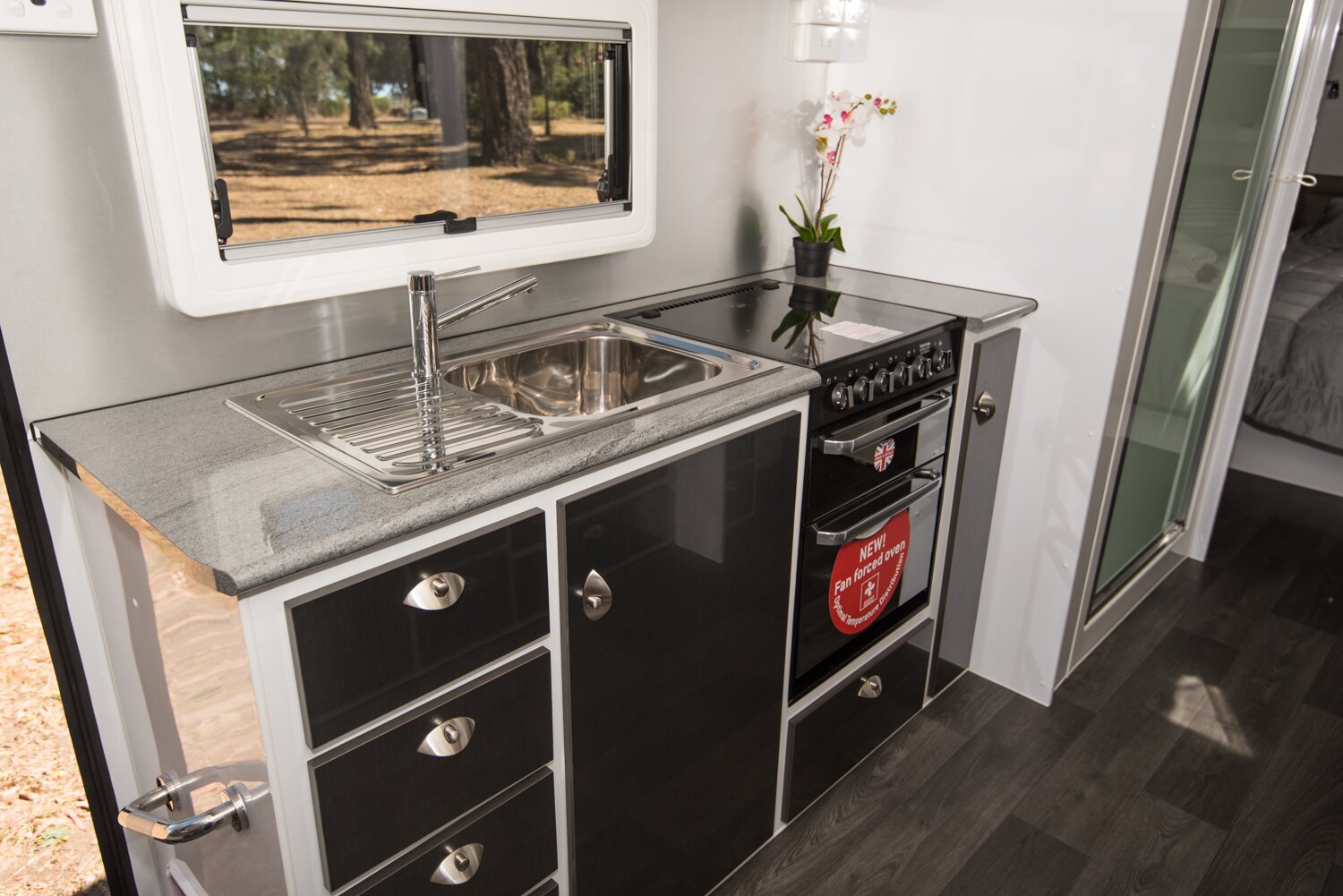 There’s plenty of room around the kitchen, which doesn’t miss a trick itself.