Meet the new darling of the motorhome set

One of the star new releases revealed at the recent Brisbane Caravan and Camping Show, the Burleigh is an important new model for the Queensland-based company.

Our test vehicle was a six-berth Winnebago Burleigh CL, the CL standing for ‘club lounge’.  The U-shaped club lounge, which is at the rear, has wraparound windows and the lounge doubles as a dinette plus converts to a large bed.  The Burleigh’s other beds comprise a convertible front dinette and an over-cab bed in the Luton peak; this latter feature marking the Burleigh as a C-class motorhome.

In standard trim the 7.9 m (25’ 11”) Burleigh CL rides on an Iveco Daily 50C17 with a 4495 kg GVM, meaning it can be driven on a car licence.  You can legally carry six people at this GVM, but with a tare weight of 3900 kg that leaves just 595 kg for the payload, which has to include all occupants.  By comparison, take the 5200 kg GVM upgrade option and payload increases to a healthy 1300 kg – you’ll just need that LR licence.

The new Daily has an excellent cab that includes all the usual Editcomfort and convenience items from cruise control to climate control, Bluetooth audio and more.  It’s just a shame Iveco doesn’t fit a touchscreen audio system with navigation, which would be the icing on the cake.

Safety rates highly too.  There are dual front and curtain airbags, anti-lock brakes, electronic traction and stability controls and even trailer sway mitigation for towing.

On the road it’s a sophisticated and pleasant vehicle to drive.  The engine pulls well with the eight-speed automatic being the real star.  It makes the best use of engine power and seems to have a gear for all situations.  Ride quality is good, as is the turning circle and visibility, making this a comfortable and enjoyable machine.

Construction uses single-piece composite panels with foam cores as structural members for the walls and roof, while the floor is also a single piece, but also with a plywood deck.  Unlike traditional panels with a metal frame inside, solid composite panels don’t form condensation on the inside in cold weather that traces the frame outline (then drips on you or runs down to your bedding and/or upholstery).  The upshot is a strong and rigid box-on-wheels, which in this case is finished with a fibreglass nose cone and rear wall.

Two electric entry steps – needed because the chassis sits quite high – lead you inside.  I like the layout because it provides two living/dining areas, important if you have four or six people aboard.  I also like the split bathroom as it means the shower and loo can be used separately.

A privacy divider across the aisle would be good so people “down the back’” could grab some shut-eye without being disturbed by people “up front” staying up, but you could rig up a curtain.

There’s good headroom throughout, while Winnebago’s new decor colours keep it bright and airy.  There are plenty of overhead cupboards throughout, which is just as well because there’s no storage under the dinette – the space is taken by slide-out extensions to make up the bed. 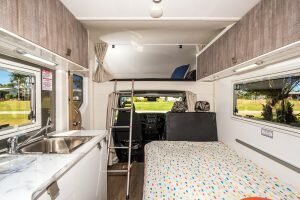 The main kitchen unit has reasonable bench space.  The cooker comes with two gas burners and an electric hotplate, plus a gas grill and oven.  There’s also a rangehood and a square sink, sans-drainer. Beneath the cooker is a deep pot drawer, while a stack of four drawers sit between the cooker and sink.  There’s also a pair of cupboards beneath the sink.

Across the aisle, between the dinette and shower cubicle, is a tall unit with a floor level 190-litre two-door three-way fridge freezer, a 25-litre 900W microwave above, a stereo above it and a cupboard at the very top.  The stereo has AM/FM/MP3/USB and SD card capabilities and can also stream music via Bluetooth. It plays though five internal speakers plus two external ones if desired.

The Burleigh carries 150-litres of fresh water and 100-litres of grey, while hot water is supplied by a Truma 14-litre gas/electric system.  The shower is a good size and comes with a fan hatch, while the seperate bathroom cubicle has a swivel porcelain cassette toilet and a vanity unit with a china handbasin, storage below and a mirrored shaving cabinet above.  This compartment also has a fan hatch plus a window, and there’s a large mirror on the outside of the door.  Both the shower and toilet compartments are a good size.

The over-cab bed is a decent size but suffers from the usual limitations of access, headroom and ventilation.  At 2.25 m x 1.35 m it’s plenty long enough, but starting to get a little squeezy width-ways for two adults.  The dinette bed takes some setting up – pull out the extensions, lower the table and fill in with cushions – and it’s also best suited to smaller people (like grandkids).

The Winnebago Burleigh has strong DNA and potential for greatness.  Its layout is highly liveable and the various sleeping options are ideal for a family or good friends who like to travel together.

For the full review and specs, see Issue 22 of ROAM