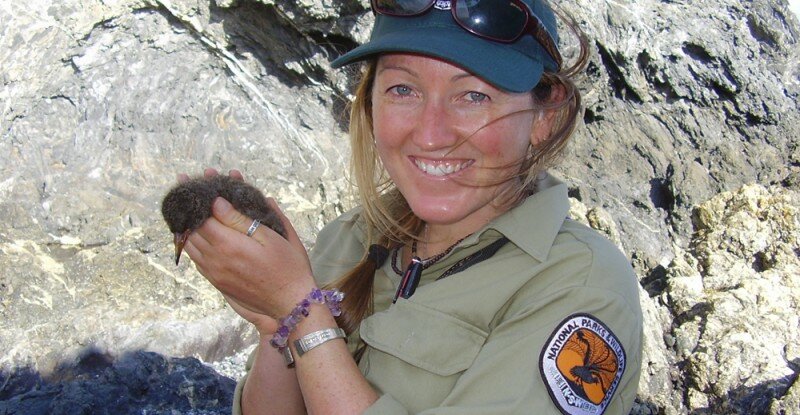 Chances are your favourite holiday beach may also be home to an endangered species. Jodie Dunn is fighting to save threatened shorebirds, especially the critically endangered hooded plover.

For most children, the great outdoors represents little more than a playground and documentary sounds like a dirty word.

Jodie Dunn grew up with a different take on things.

“I was raised on David Attenborough and my parents have always been into environmental issues, so I grew up with an appreciation for plants and animals and nature.”

After studying biology at Wollongong Uni, Jodie followed her love of nature all the way to Antarctica, completing an honours thesis on its plant life.

Today her work has brought her closer to home, as she coordinates the NSW National Parks and Wildlife Shore Bird Recovery Program along the NSW South Coast from Batemans Bay to Wollongong. What was originally meant to be a six-month contract has now turned into an eight year endeavour to bring the Hooded Plover and other threatened shore bird species back from the brink of extinction.

“It’s a bit of a dream to be working for the National Parks doing threatened species recovery work. I didn’t mean to stay here for
eight years, but the program has been quite challenging and there always seems to be something new to develop.”

The Hooded Plover however, listed as critically endangered, is the one that takes up most of her time.

“When I first started the program, there were less than 50 Hooded Plovers left in NSW and only seven or eight breeding pairs in the region. Now we have about 14 to 15 breeding pairs and over 70 Plovers which is pretty awesome.”

Affectionately coined ‘Hoodies’ thanks to their prominent black head markings, the plover nests on tourist beaches from Jervis Bay
to Kioloa, including holiday hotspots such as Berrara Beach, Cormorant Beach and Lake Tabourie entrance.

Jodie says the greatest threat to the little shorebird is human interference, particularly from dog owners and children unaware that they are sharing the beach with a rare species.

“The eggs are camouflaged and only a couple of centimetres long which makes them pretty easy to step on. That’s why we need to find them first and put up string fences and temporary signage to let people know to stay clear.”

The danger increases however once the eggs hatch, as the new Plover chicks do not stay within the marked fence lines.

“Hoodie chicks feed themselves so they’re out of the nest within 24 hours. They are so vulnerable, well camouflaged and can’t fly, so
you can imagine that dogs and kids running around the beach pose a threat.”

Jodie says community support is essential in protecting the critically endangered Plover and other threatened species.

During her time as coordinator, she’s helped increase the number of Shorebird Recovery volunteers from five to over 100.

A big part of the job is running community education programs. “We do an event called the dogs breakfast, where we put on a barbeque on the foreshore where we often have nesting. We give away doggy treats and talk to dog owners to try to make them understand the importance of keeping their dogs leashed on nesting beaches.”

“It’s nice to get out there and talk to people and teach them about the birds, because when they see what the eggs and chicks look like they understand that they’re really vulnerable and that they need to be protected.”

More information on shorebirds and volunteering is at www.southcoastshorebirds.com.au

Jodie says: “Stunning beaches on the northern end of National Park. With hardly anyone around, it is a very peaceful place.”

Right on the edge of Murramarang National Park, take advantage of the expansive camping facilities and enjoy being surrounded by native wildlife. With only 300 residents in the immediate area, it’s a great place to relax and enjoy the natural scenery, offering various opportunities for bird watching and even whale watching at certain times of the year.

Jodie says: “This is a really important migratory bird feeding site, so you get amazing flocks of migratory shore birds that have come all the way from Siberia, Alaska and China. It’s a very special place.”

With over 150,000 birds visiting annually, Roebuck Bay boasts the largest diversity of migratory waders in Australia. Head over in March and April to see these birds on their journey or visit the Broome Bird Observatory for recreational bird watching all year round.

Designated as a wetland of international importance in 1990, Roebuck Bay also acts as a feeding ground for dugongs and green turtles, with other marine turtles and dolphins being regularly sighted.

“A beautiful, remote, rugged coastline. You can spend days hiking surrounded by nothing and no one except untouched nature.”

Situated just south of Eden on the New South Wales/Victorian border, escape the crowds and get back to nature at this beautiful reserve. While visiting, enjoy a swim in pristine lakes, walk along tranquil beaches or dabble in a bit of fishing. Backpack camping and picnic facilities are also available.

For the more adventurous, the Nadgee Wilderness Walk might be just the thing, offering a four-day coastal hike through one of the most isolated and remarkable environments Australia has to offer.

“A beautiful bay with some great diving. There always seems to be dolphins in the bay, which is pretty great.”

Only two and a half hours south of Sydney, Jervis Bay is recorded by the Guinness Book of Records as having the whitest sand in the
world. Renowned for its vast array of native wildlife, partake in some whale watching or venture to the beaches just outside the bay where you might just spot an endangered Hooded Plover.

The Mount Warning Caldera is a World Heritage Listed National Park, and is listed as one of Australia’s 8 most iconic sites by the National Landscapes Program. With its spectacular rainforest scenery and abundant wildlife, it offers great opportunities to walk through the wilderness or relax and enjoy the fresh country air.

Interestingly, Mount Warning is the central remnant of the Southern Hemisphere’s largest extinct volcano, and is the first place on
mainland Australia to receive the suns rays each day. A must see for any nature lover.