Blue Tongue Campers, the creation of Karl Geddes and Andrew Walter, in the southern Sydney suburb of Kirrawee, was launched to provide the market with the pair’s best efforts in camper trailers. When they began, five years ago, they started with all-Australian manufactured campers, but found themselves swimming against an economic tide.

Customers wanted all local materials, but many baulked at the extra $5000 for local canvas and so the range of Blue Tongue campers began to feature locally made trailers with imported tents. This kept the price down, allowing Blue Tongue’s range of moderately priced side-fold softfloor campers to offer a range of extra features in the basic trailer with livable canvas.

The business was running along happily, but faced with a rapidly evolving market,Karl and Andrew recognised that they needed to offer something new, with a wider range of options in both basic layouts and features. Developing a totally new camper design is expensive and time consuming, or there was the option of buying in finished trailers from China.

The latter course was settled on, and two totally new campers were ordered, with the first just landed: a rear-fold hardfloor and a forward-fold design. Karl and Andrew have very definite opinions about build standards and protecting Blue Tongue’s hard-won reputation for quality was obviously paramount.  While it is still early days in their relationship with the overseas workshops, they have already made great strides in resolving the sorts of issues that make customers look warily at some imports.

The forward-fold camper has been named the Overland Grande, and is based on an Australian-developed design in which the top of the camper body folds forward, not back, with the bed coming to rest on the front of the camper and the rear half being devoted to a lounge/storage/additional sleeping area.

To facilitate the opening and closing processes are two winches, one at the front and one at the rear.

To open the trailer you simply back off the front winch strap, fold over the front storage box’s top firewood/luggage rack, extend out the front winch on its post, undo the six clips around the top of the trailer and with someone at the back giving the lid a gentle lift to start the process the front person cranks the lid over. The rear person feeds out the rear winch at the same pace, with the majority of the weight being carried by the large gas strut on each side.  Then it’s just a matter of opening the side door, folding down the step and adjusting the three internal tent bows out to give the canvas tent its shape.

That whole process  takes just a few minutes, giving you a bed to sleep in for the night if you just want a quick stop over, or you can spend another 20 minutes erecting the side awning.

The advantage with this design is that at the front of the camper you get a queen-size bed and in the main body of the trailer you have a comfortable lounge seating up to six people around a portable table (which is included) and which can convert into another queen-sizebed.

The trailer has a number of comfort features which lifts it right out of the basic camping class. There are two LED strip lights internally, as well as 12V and USB outlets internally and at the kitchen. There are four storage drawers under the internal lounge and internal window covers enabling you to close up at night without having to step outside if the weather turns really nasty.

In case of a light shower, there’s plenty of protection anyway with external over-window awnings on all the openings except on the kitchen side, with gussets back to the main tent sheltering the window from all but the worst in weather. All windows and the roll-down door have midge-proof screens.

The awning has the three side walls included, as well as an annex floor which seals to the walls with velcro. The top of the camper has a tropical roof, providing additional shading to the roof canvas to keep the interior cooler in the heat and warmer in the cold.

All the canvas is plain weave 470gsm on the roof and 420gsm in the walls and the roof lining has a unique aluminium impregnated polyurethane lining on the underside which does great things in thermally insulating the camper.

Along the driver’s side of the Overland Grande is the living area, with a slide out kitchen at the rear and a large fridge slide and pantry drawer at the front. In our test camper the kitchen was steel with small cutlery drawer, a large stainless steel sink and large three-burner Smev cooker, however the company says future versions the kitchen, which is free standing without the need of support legs, will be all stainless steel.

The kitchen tap, which is connected on set-up, along with the gas, is electronic and turns on automatically when raised into operating position.

The fridge slide and the pantry is also being converted to stainless steel in future orders, with sufficient space for up to an 80 litre Waeco or Engel fridge, with both options available.

The wheels are 16 inchalloys with all terrain tyres, on six-stud hubs. The suspension is dual-shock trailing arm independent for the smoothest ride, with 2.6 tonne rated bearings and full toe-in and toe-out adjustment. The chassis is 75 x 50 x 3mm and the drawbar is 100 x 50 x 3mm, all fully galvanised.

Chinese-made campers have come a long way in recent years and with the experienced  intermediaries such as Blue Tongue keeping a close eye on the specs and the quality, there’s no doubt they will continue to improve.

The Overland Grande forward-fold camper has much to offer, not the least being its $19,000 asking price. You get a lot for your money and a heap of comforts that would only have been available in the most expensive brands only a few years ago. Take a look and you’ll be impressed.

Link: Full review and specs in the June/July 2014 issue 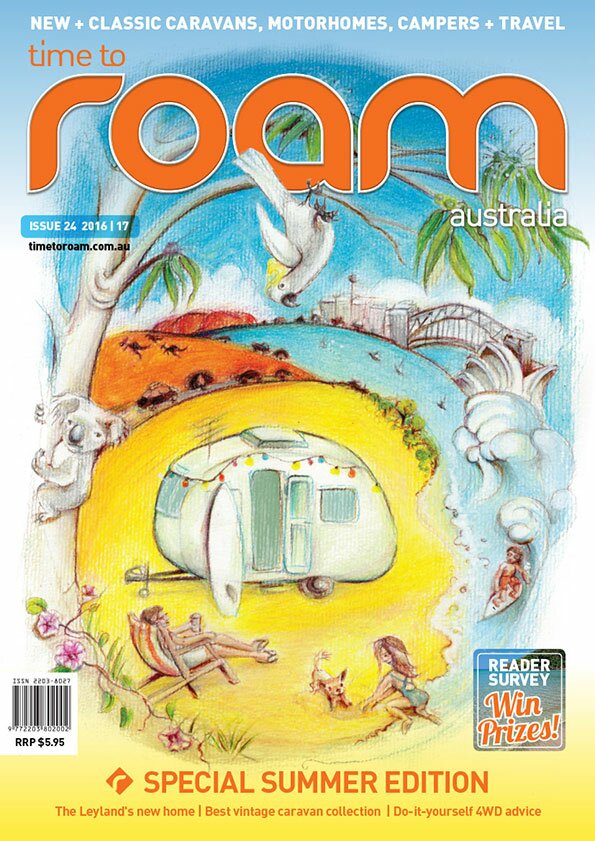