If you’re a long-time caravan owner who’s done some serious travelling over the years then you get to a stage where you know exactly what works and what doesn’t.

And so it was for Eric Rolfe who retired and then spent 20 weeks every year travelling in various caravans around various parts of the country.

Eric’s son Anthony just happens to be the owner of Camden Caravans in Sydney’s south west. When he decided last year to add the Living Edge range of caravans to his line up Eric worked with Anthony to help design the top of the range model exclusive to Camden Carvans.

Living Edge is a relatively new brand, its three owners John Candido, Rick Butcher and Tony Cutrone started manufacturing in Craigieburn Victora in 2012. The three partners bring together decades of experience in caravan building, with qualifications respectively in plumbing, cabinet making and upholstery.

This experience is evident in the quality and workmanship of their RVM-accredited product. They’ve set out to build at a higher standard and it shows. 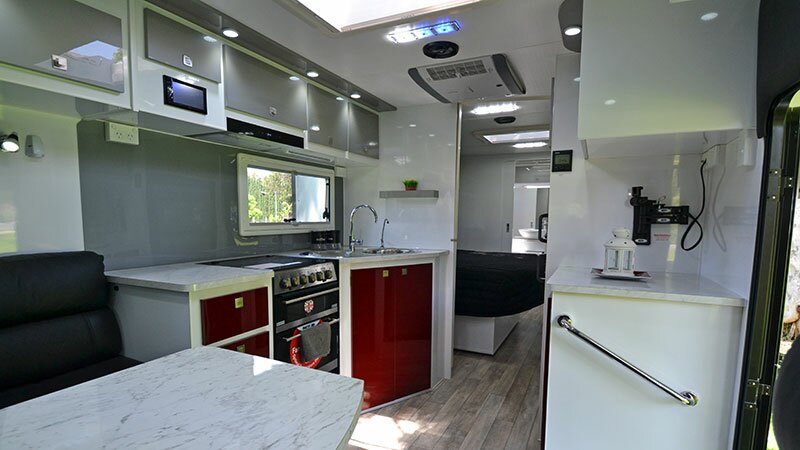 They’ve also taken to marketing the range a little differently.

Living Edge caravans come in ten different floor layouts ranging in length from 5.4m up to 7.2m. These ten layouts are available in three different levels of luxury.   Rio models are the standard, although Living Edge’s level of standard inclusions is pretty impressive. Next comes the Bellagio level which includes even more luxuries like a bigger fridge, washing machine and checker plate exterior finishes.  Finally there’s the top of the range Venetian which is where Eric comes in, with a list of about 25 more upgrades.

The upside of this is you can get a very large van with the Rio standard inclusions for about $85,000, or with everything that opens and shuts in the Venetian (including the slide-out bedroom) for just under $120,000.

Stepping inside, the first thing that grabs your attention is the well laid out kitchen area with plenty of bench and storage space. The bench tops are the same height you’d normally have at home, which adds to the sense of feeling right “at home”.   The cabinetry is very well put together, there’s no chipboard or MDF here. There are plenty of big drawers with metal runners and thick bases, built to last for years.

Kitchen equipment includes a fan forced oven, microwave with grill and a top range 186 litre Dometic three-way fridge. It’s slightly elevated to save bending down too much. Nice touch. 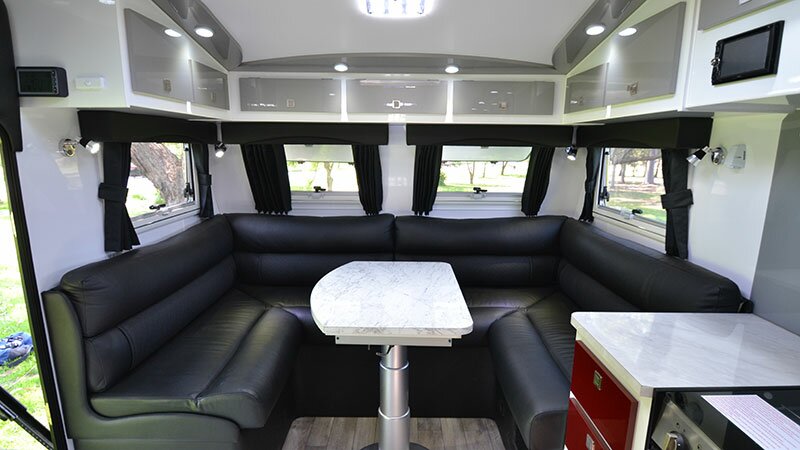 Upfront is a spacious lounge area with nice and firm real leather seating. It folds down to create another queen bed if required.

There are numerous LED lights throughout, all neatly recessed in the ceiling. The sleek lighting and quality finishes add to the sense of luxury, while the climate can be controlled whatever the situation with Truma air-conditioning and central heating running on gas or electric.

The rear ensuite with shower, toilet, basin and washing machine is compact, although there’s good space where you need it including in the shower and storage spaces.    Storage overall is a great feature of this van, from the roomy lined front boot outside through to the good deep wardrobe hanging spaces in the bedroom.

The slide out in the bedroom easily takes the bedhead out 600mm at the push of a button. It makes it seem much more spacious and easy to get around. This type of design, with an east/west configured slide out queen bed is increasingly popular with buyers in this range and it’s easy to see why. 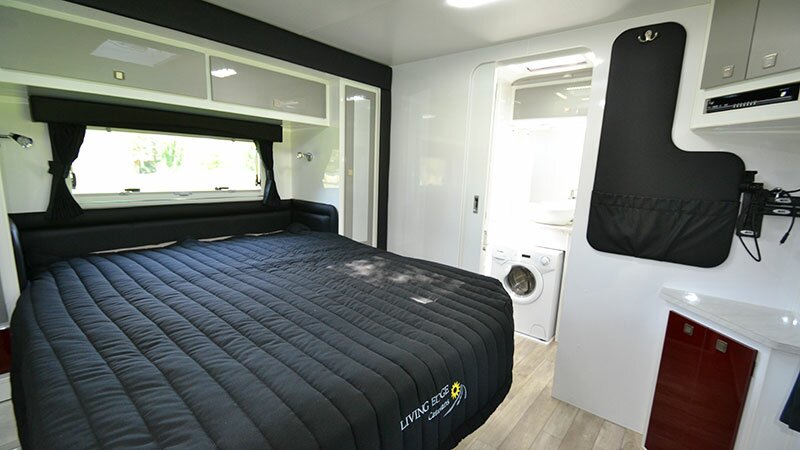 Two flat screen TVs come as standard, one in the living area, one in the bedroom and there’s a power outlet and aerial point outside if you want to relax under the awning.

Stepping out there’s an electric double step to take you back to ground level – the added height comes from the fact the wheels (16 inch alloys combined with Cruisemaster suspension) are below floor level. This gives added clearance height and means there are no wheel arches protruding into the caravan itself.

Other external features include a 150w solar system with two batteries,

two gas bottles, three 90 litre water tanks and a fold out picnic table. In Eric’s case, the table comes with a handy map of Australia to plan the next day’s adventure or mark off destinations as you go.

The chassis is about as tough as they come, six inch steel Austrail. The warranty is 12 months and it’s worth noting there are not nasty “exclusions” for travelling on unsealed roads.

Sadly Eric Rolfe passed away last February and he never did get the chance to try out the caravan he helped build. In his final days he did however make it out to take a look at the Eric and he was suitably impressed. So far caravan buyers have been too – at the time of writing there was a wait of several months for new orders.

Link: Read more in Issue 18 of Time to Roam Australia.

The caravan born in the Space Age