Forget everything you’ve ever heard in the past about motorhomes based on 4X4 cab-chassis.

Small cab-chassis-based motorhomes first came to prominence way back in the 1970s, but have never commanded much more than a niche in the market, partly thanks to a reputation for being cumbersome and top heavy.

Explorer motorhomes have done a lot to turn around that way of thinking, building a motorhome generations beyond anything that has gone before.  Its latest Vision motorhome is powerful and agile to drive, while a one-piece fully moulded fibreglass body makes anything similar from the past look extinct.

The Ranger chassis has been modified to increase the GVM from 3200 kg to 3500 kg.  The suspension modification includes new rear springs, rear shock absorbers, front struts and front shock absorbers.

A mixture of freeway driving and forest bush tracks not only demonstrated the turbo diesel engine’s power but also the improvements the suspension modifications made to handling.  Certainly on the bush tracks, the 4X4 Ranger proved itself to be very capable. Being only 2.18 m (7 ft 2 in) wide, it’s ideal for narrow roads.

One of the worthwhile options fitted to the review vehicle were Clearview-brand extending external mirrors.  Normally fitted to caravan tow vehicles, they work well and can be retracted when parking in tight situations.

Entering through a rear door the first thing you notice is the layout, with north-south single beds above the driver’s cab.  Most cab-chassis RVs have an east-west bed there, and while that is an option on this model the single bed arrangement has a range of advantages. 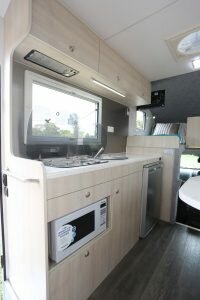 Rounding out the interior is an ensuite across the rear, a nearside kitchen bench, and a club lounge/dinette opposite.  Although the interior isn’t huge, a light colour scheme and large window area create an open feeling.  By night, well placed LED light fittings, including semi concealed strip fittings, give you light where you need it.  It’s also well ventilated thanks to a Fiamma ceiling fan or a roof mounted Dometic air conditioner.  The bed area also comes with a wall mounted Sirocco 12V fan.

Often a lounge/dining area in a motorhome this size is quite small but the Vision’s can accommodate two adults without much trouble.  The oval-shaped table is large enough to be practical but easy enough to get around and can be pushed out of the way when not needed.  Lockers above the dinette provide some much needed general storage.  Although there’s not usually enough space for a wardrobe of any sort, Explorer has managed to squeeze two in.

The kitchen bench comes with a three burner cooktop and round stainless steel sink.  Under-bench there’s a microwave and 136 litre Waeco fridge, while both the cooktop and sink have smoked glass lids for more prep space.  Also under the bench are two drawers, and a cupboard with two wire basket drawers.  All the space above the kitchen bench is devoted to storage with the cupboard nearest the door containing the electrical panel.  In its base form the Explorer Vision comes with a 100 AH battery and charger.  However, in our test vehicle optional solar panels and a second house were added – both very useful for those planning extended bush travels.

By day, the previously mentioned single beds are pushed back into the Luton peak, but at night the 2.0 m x 0.69 m (6 ft 7 in x 2 ft 3 in) beds can be pulled out into the air space above the kitchen bench and the lounge.  A large folding box step that hinges to the driver’s cab roof between the beds, swings down to make climbing in and out of the beds quite easy.  It’s a clever design and also means it is somewhat easier for making up the bed.

Given the ceiling height of the Luton is 800 mm (2 ft 8 in), there’s a fair degree of air space and the windows on either side supply a good cross flow of ventilation.  Between the beds is a shared bedside cabinet, drawer and flat screen TV, which can be swung around so as to be watched from either the beds or the dinette.

Getting a bathroom into a smallish motorhome is always a challenge, but here once again Explorer makes good use of space.  The Dometic cassette toilet fits into the rear right-hand corner, while the shower cubicle is on the opposite side.  The door frame of the shower cubicle does cross the rear window frame, but provides good ventilation, leaving enough space under the window for a wash basin.  Filling the wall space above the toilet is a shaving cabinet and towel rail.

Four-wheel drive cab-chassis motorhomes may always be a niche player in the market, but Explorer deserves credit for absolutely re-defining the concept and coming up with something better.

For the full details and specs, see Issue 21 of ROAM.