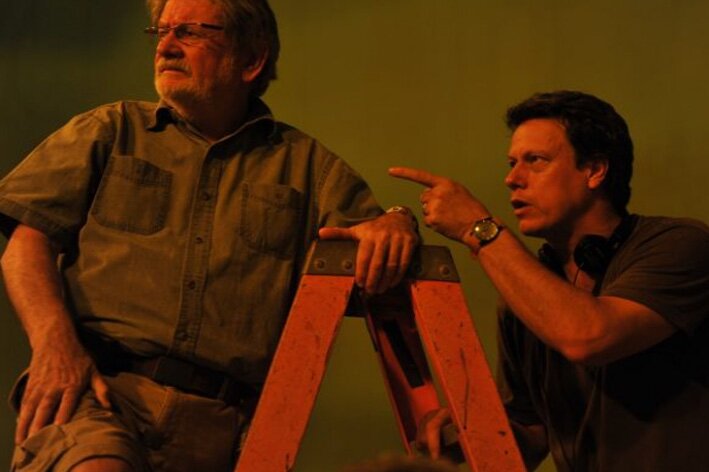 Camping with the stars: Don McAlpine

He’s seen more stars than just about anyone – working with the biggest names in movies and spending any downtime camping in the outback under the Southern Cross sky.

Over the past four decades cinematographer Don McAlpine has shot some of the world’s most distinguished and best-loved movies. These include the classics Breaker Morant, My Brilliant Career, Don’s Party, Moulin Rogue and most recently, the multi-award winning dramatic comedy The Dressmaker. Then there are the Hollywood blockbusters like Predator, Mrs Doubtfire, Patriot Games, The Chronicles of Narnia and X-Men: Wolverine.

When I was a about 11-years-old a friend and I used to just take a blanket, a billycan, some meat and bread for a stew and go out camping around Temora, where I grew up. We’d take rifles for hunting too as back in those days you were trained from about eight years old how to handle a gun and look after it. Which, in this day and age, is beyond comprehension.

The easy answer is ‘the next one’ because you can travel with hope…but in the very early days with an old Nissan Patrol we went out and followed the Cooper Creek back from Lake Eyre. This was back before anyone was out there. I can remember we got there one night and we were the only guests in the hotel, except for a couple of guys there who were doing some oil work

Tell us about some of your favourite camping memories?

I won’t tell you where it is but we once found this waterhole and it was just like the aboriginal tribe had left yesterday! Of course they’d probably left 40 or 50 years ago but everything was laid out in an amazing display of their lifestyle at that time, so that was one of the surprises.

Any not so enjoyable camping memories or experiences?

Once we ended up in South West Queensland and we were at one of these magic waterholes and it started to drizzle. We packed up quickly and began to drive across this plain that was about 50 or 60km across and then the sky fell in! Eventually the vehicle just sunk into the slush that the rain had developed in this black soil plain. We were stuck there but we had a tent with a plastic base to it which seemed to keep a lot of the water out so we slept overnight in there and thought about what we were going to do.

What are some of your favourite destinations around Australia?

We go right out into the desert. Our main purpose is to get out to where nobody else is and we’re lucky enough to have been where very few people have been. We use a system of satellite photographs to find remote waterholes that are just fantastic. Sometimes you’ve got to drive 200km to get to them so it’s high-risk, very remote sort of stuff. We used to have a shortwave radio and check in every two or three days in case something went wrong but now we have a satellite phone. Now I take fewer risks, as I’m getting older!

Why do you enjoy camping so much?

In the other life I lead as a cinematographer, I’m integrated into a very close working group of maybe a hundred people for every waking minute and somebody looks after us and life is just managed. Then you get out here to camp and you’ve got to manage your own life. It’s the total antithesis of the other life I lead. That’s how I rationalise it!

For the full profile and images, see Issue 22 of ROAM