We could make all sorts of puns about the Coromal Appeal “appealing” to wider market.

The fact is the latest compact ensuite caravan from the WA-based manufacturer really does inject a new level of competition in this already fiercely competitive part of the market.

The Appeal is available in just three layouts; the largest a 21’ family van with bunks. With all three models in the range available for under $50,000 this pits it head-to-head with the hugely successful Jayco’s StarCraft Series.

At 18 feet in length, the AP554s is the smallest in the Appeal range.  This single axle fixed roof caravan comes complete with a generous sized ensuite, queen bed, café dinette and reasonable kitchen area.  Coromal has done a great job making use of a small space. 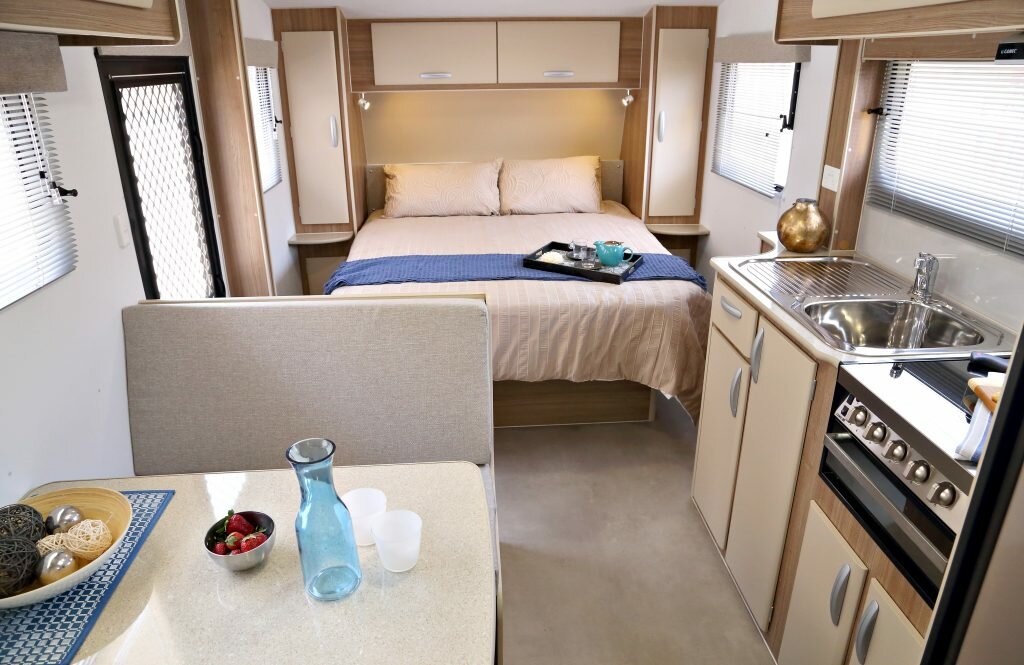 Coromal Caravans have been around since the late 1970s and have been part of Fleetwood Corporation since 1999, the company also behind Windsor Caravans and Camec.

Stepping inside the Appeal I was pleasantly surprised by the class of the interior, seeing absolutely no difference in quality of finish compared to other more expensive models in Coromal range.

The kitchen is well laid out and even has a good sized sink. The 148L three-way Dometic fridge should just about be big enough however an 186L fridge is an optional upgrade which Coromal offers on this model.

The café dinette is spacious but only comes with a fixed table –  an upgrade to a tri-fold table is an option I would certainly take.  I also felt a couple of extra directional lights both in the kitchen and in the ensuite may be useful .

The model reviewed had a 100Amp AGM battery fitted under the bed – although this is a dealer fitted extra as is a TV aerial.

There is plenty of storage space inside the Appeal, the largest under the bed and under the dinette seats.

Surprisingly roomy, the shower is particularly impressive with a quality, stylish and functional lockable screen.  The catches on all of the cupboard doors throughout are all of a high quality and seem to engage simply yet securely – something other manufacturers seem to miss.

In summary, the Coromal’s Appeal 554s is undeniably great value for money.  Although marketed as an entry level caravan, the build quality is as good if not better than a lot of other brands out there which market their products as luxury models for substantially more money.  Fundamentally and structurally the Appeal is built to the same high standards as the top of the range Coromal models.

For the full review and specifications, see Issue 12 of ROAM