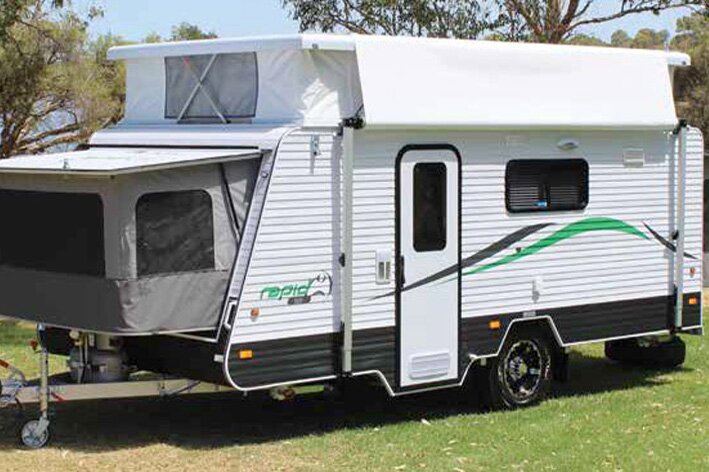 When disco and denim became popular back in the mid 1970s, so too did the great Aussie pop top.

As a certain famous professor used to say back in the 1970s, why is it so?

I reckon it has a lot to do with  a good night’s sleep.

The beauty of the Windsor Rapid pop top range (and similar variations by other manufacturers) is that you get a compact yet roomy and well appointed caravan with two comfortable and separate sleeping areas.

Better still, the double beds are at either end of the caravan so you can get as far away as you possibly can from a pesky snorer.  In the Windsor Rapid you can draw the thick divider curtains, turn on your LED bed light and read a good book without disturbing your early-to bed co-camper.  Taking it off road, you can find somewhere peaceful in the bush, open the three large fold down flaps surrounding the bed and it’s like you’re in a tent sleeping under the stars.  But it’s better than a tent.   You’re well off the ground, protected by midge-proof insect screens, there’s a hard top roof over both bed pods and only a step away from the ensuite.  Pretty close to heaven don’t you think?

Craig Blackler of Perkins Caravans says the majority of pop top buyers are people looking for separate sleeping areas, whether they be young families, siblings or travelling companions.

The canvas fold out bed pods and pop up ceiling space certainly give you a feel of camping, rather than being in a luxury home on wheels, although the range of appointments mean you’re in no way roughing it.

Stand outs for me inside the Windsor Rapid range is the overall look and feel of the furnishings and the good food preparation space.

The main kitchen area is located just to your left as you step inside the van.  there’s a four hotplate stove and grill (one electric, three gas hobs).  A glass lid covers the hotplates to add to your food prep space and there’s a very generous sink – more like one you’d find at home.

For most buyers I’d expect life would be lived mostly outdoors in the generous-sized awning space.  There’s a picnic table, 12v power outlet as well as a LED light it and second one beside the entrance.

Around the exterior base of the van is stylish protective plate Windsor calls Cobra plate.  It’s not as tough as straight out metal plate, but tougher than straight panels and looks good too.

At the rear is a spare wheel fitted to the bumper that neatly folds down to allow the read double-bed space to fold out.

The off road models are wired for solar and it would set you back about $1000 to have a panel fitted.  There’s a single 100amp battery and a projector power management system.

This is the basis of a great outdoors package for the price.  You can tow a great well appointed caravan space away yet still enjoy the outdoors feel of camping under canvas, with your family, best mate of favourite couple.

For the full review, see Issue 19 of ROAM