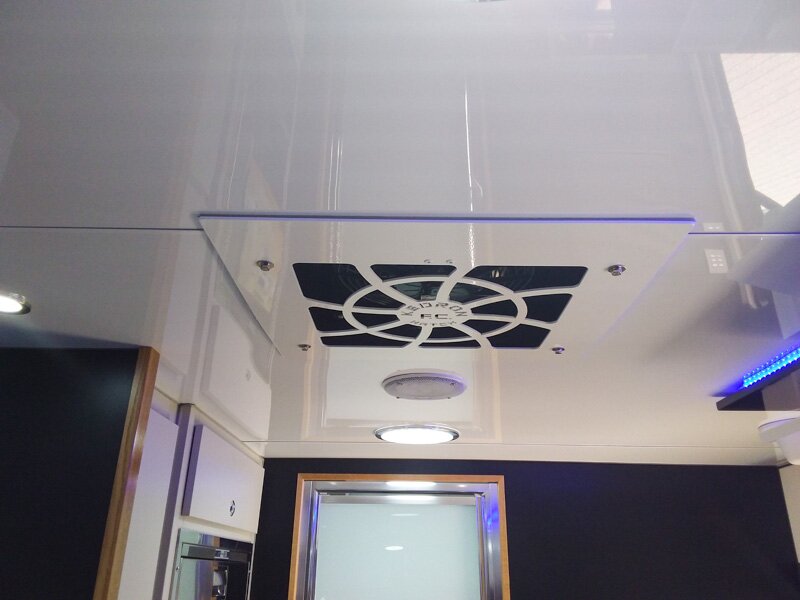 Kedron Caravans had a number of new features on display at the Queensland Caravan Show last weekend, including a boat-trailer box, a six-wheel, triple axle platform with air-bag suspension and fold-down, remote controlled rear wheel carriers.

But the most talked about, by far, was it’s filtered compressor hatch – a roof-mounted hatch that creates positive pressure in the caravan and keeps dust out. While Kedron Caravans isn’t the first to market a dust-proofing system by forcing air into the caravan so that dust cant make its way in through vents or seals, it’s product stands out for the simplicity.

It’s been designed to fit a standard 14in hatch cavity, so could potentially be retrofitted to vans that aren’t built by Kedron Caravans (although Kedron has been hesitant to say that it’ll make them available for that purpose, just yet). It’s also completely serviceable from inside the van, without tools. Kimberley Kampers had its Always Positive system, which utilised compressed air pumped slowly into the top-of-the-range vans to maintain a postive air pressure in the van. Lifestyle Campers has a dust suppression system available as an option, which pulls air from outside through a small, discreet vent, filters it and pumps it through the camper. Another product born in the mining industry for keep truck cabs dust free (the Respa PFP), has also been adapted for caravan use.

But all of them take up space, somewhere, be that in a storage boot, tool box or cabin area, while the F.C. Hatch from Kedron just replaces a feature you’d already have in your caravan. It’s made in Australia from powder-coated aluminium, using a washable, re-uasble Australian filter. Only the continuous use thermo fan which pumps the air through is imported – from Italy.

Designed to be used mostly when the caravan’s underway, it’s notably power hungry – it used about 6amps an hour (more than a fridge, probably), but considering most DC-DC chargers put 40amps into a caravan under tow, and solar might add that again, it’s not a significant drain. When its running, you can actually feel air being pushed out of the door vent, so it doesn’t pull any punches.

Currently only available on new order vans or as retrofit to older Kedrons, it’s likely that the hatch will be made available on other model vans.