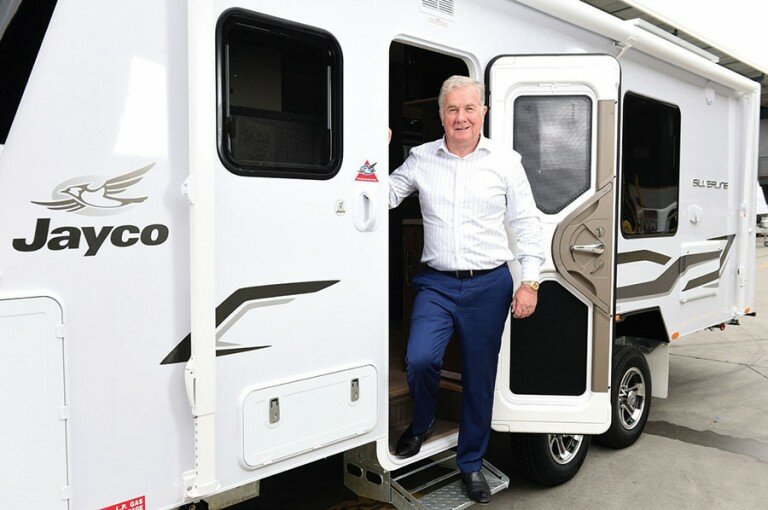 Gerry Ryan celebrates 40 years in business and reveals how Jayco Caravans outlasted all the other big names from the 1970s.

The outer Melbourne industrial suburb of South Dandenong is not the sort of place you’d normally pick as a tourist destination.

There’s the usual nondescript rows of sheds and warehouses you find on the edge of any city, then standing out from it all is a large and shiny façade of glass and stone. Shapley trees and manicured gardens add to the impression this is something special.

Jayco Australia, Number 1 Jayco Drive is actually a “bucket list” destination for grey nomads. They arrive for tours, hoping maybe to catch a glimpse of their dream retirement vehicle rolling along the massive assembly line.

Young people come too. For them the draw card is the opportunity to see how something is made. This is the last place remaining in Australia where you can experience manufacturing on a grand scale.

In a country that prides itself on “big” tourist destinations, like the banana and the pineapple, Jayco is right up there in the colossal stakes.

There are six massive sheds, said to be the biggest pillar-less roof space in the southern hemisphere. It’s twice the size of the Melbourne Exhibition Centre.

A workforce of 1100 employees produce a new caravan, motorhome or camper every 11 minutes. More than 11,000 are expected to be built over the next year.

In a magnificent office siting atop of the 50 acre complex is Gerry Ryan OAM, the self-made man who made it all happen.

This year marks 40 years since he started out producing basic pop top campers in a cowshed, not too far from where he sits now.

From such humble beginnings, few including him could have imagined such success. The company boasts an annual turnover of around $350 million. Gerry himself is reported to be among the top 20 wealthiest people in Australia.   Success in the RV industry has allowed Gerry Ryan to apply his entrepreneurial skills to other sectors, supporting sporting teams and investing in the arts.

Not bad for the boy from Bendigo who started with nothing. Number six of nine children, he grew up in family of such limited means they wouldn’t even have contemplated a caravan holiday.

Gerry credits his parents for instilling in him a respect and passion for hard work.

However career success did not come easily when he first left home and started work.

Young Gerry landed what seemed a promising job as a trainee accountant with AMP, but struggled with the study he had to undertake after hours.

“I lasted six months and the university lecturer told me I was wasting my time and his time as well. As it turned out he did me a favour.”

He decided to head west to find a job in the mining industry, but took what was intended to be a “fill in” job at Melbourne camper trailer business Sunwagon.

It was soon apparent what Gerry may have lacked as a student was more than compensated for when it came to managing people and building things.

Within two months he was promoted to factory foreman and with the temporary job becoming permanent, Gerry became production manager at age 22.

Sunwagon sent its rising star on a fact-finding trip to the USA, including a stop at the fast-growing Jayco plant in Indiana. Founder Lloyd Jay Bontrager had developed and patented a number of unique lifting systems for pop top campers in the mid 1960s and by 1974 was making big inroads in the North American market.

Gerry ended up spending two weeks there, bonding with Loyd’s son who was roughly the same age. Gerry headed home brimming with ideas, but clashed with his boss who was resistant to change.

“Thanks, son, we’ll look at them, was the general attitude. My brief was given short shrift.”

So he decided to go it alone and build his own campers, negotiating with Jayco US to use some of their components including the superior lifting technology.

“I’d actually trademarked a couple of other brand names and they suggested I take the Jayco name and use it here and I thought, why not, it’s already a good established name.

With the help of a small crew he’d enticed away from Sunwagon, Gerry started working on a prototype camper in a simple cow shed at Cranbourne. Part of the daily routine involved shoveling away cow manure.

Want the latest in caravan reviews, news and history? Subscribe to ROAM